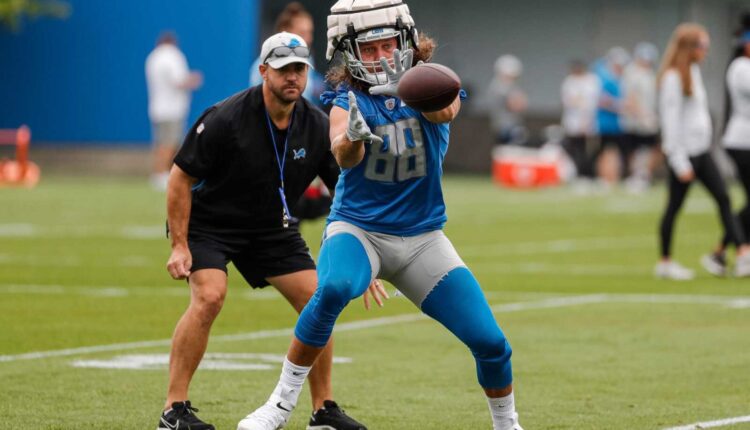 Quite a few Detroit Lions players have something to prove this season, but Pro Football Focus has honored in on one in particular.

Doug Kyed of Pro Football Focus recently named one player from each NFL team with the most to prove in 2022. For the Lions, the pick was….

If Hockenson doesn’t sign a contract extension before the 2022 season, he has a chance to reset the tight end market with a breakout year.

TJ Hockenson indeed has a lot to prove this season

Hockenson has put up back-to-back 60-plus catch seasons, and he did it last year despite missing the last five games of the season. In 2020, he was second among NFC tight ends in receptions (67) and earned a Pro Bowl selection.

Injuries have cost Hockenson substantial time in two of his three seasons, and at least by Pro Football Focus grade he is trending the wrong direction as a blocker.

The 25-year-old Hockenson seems to have another level in him, and Lions head coach Dan Campbell knows it’s there.

Here’s what Campbell said after an OTA practice in June.

Here’s the beauty of Hockenson, and I’ve said this before, he’s a guy who’s a willing blocker and has the ability to win a one-on-one matchup in the pass game,” Campbell said. “So, when you have that ability and you’re willing to get in there and mix it up in the run game, that’s a good thing. Those guys aren’t always easy to find.”

The Lions picked up Hockenson’s fifth-year option for 2023. But the longer it takes for them to sign him to a long-term deal, which should be when and not if the more expensive it’s going to be. David Njoku may not be the last one with far less of a resume than Hockenson (and others, like Darren Waller) to get a deal that pushes the tight end market upward.

Hockenson and his camp may be content to take contract negotiations into the season, and bet on having a healthy, breakout season (or at least being in the midst of one).

It’s hard to get all the way to, as Kyed hinted, “a chance to reset the tight end market” with a breakout year. But Hockenson may have to show he’s in the elite tier of tight ends, not a notch below, before the Lions pony up to pay him like one—since he’s under contract for two years anyway.

There’s no denying Hockenson has a lot to prove in his fourth season, even if it could be debated whether he’s the Lion with the most to prove in 2022.