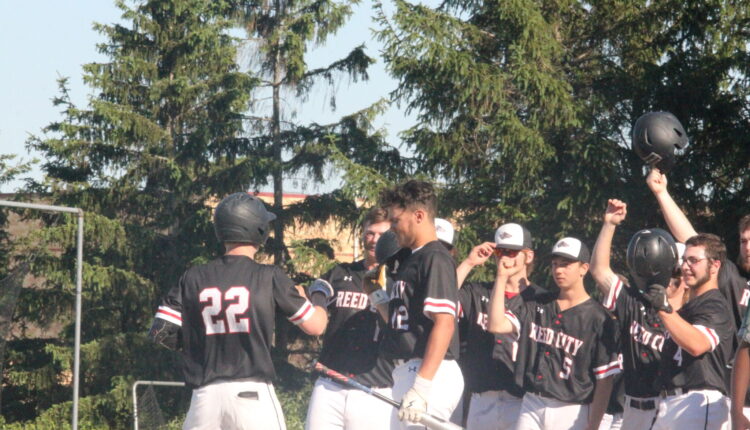 Reed City won the CSAA Gold conference after finishing the season 22-15-1. They would go 11-2-1 in conference play. The Coyotes would win the district championship over Hart before eventually falling in the regional semi-final against Traverse City St. Francis. Head coach Eric Grannis gave his thoughts on his third season with the Coyotes.

“We feel like we met and exceeded some of the expectations we had laid out for ourselves.” Grannis said. “We wanted to compete for the conference title, and we played extremely well in the conference where we won the conference by a couple games. We also wanted to win districts and stretch our season even further. We also did that.”

The Coyotes had a multitude of players receive all conference honors or all district honors. This included Isaiah Moore, Treyvor Conklin, Xavier Allen, Max Hammond and Noah Morgan.

Sophomore pitcher Max Hammond also played a large role in the team’s success. The Coyotes ace pitcher, Hammond would record an ERA of 1,615 with 128 strikeouts. He would also pitch two no-hitters and one perfect game. He would also have a strong season in the batter box at .419 with eight home runs, 37 RBIs, and 16 steals.

“Overall, Max had a fantastic season, where we believe he was the most dominant player in the area.” Grannis said. “He could take over a game on the mound and ruin the opposing pitcher’s day at the plate. Max also had a mere nine strikeouts in 143 plate appearances this season.”

For his season, Hammond was named first All-Conference team, the All-District team, and the MHSBCA All-Region team.

Junior pitcher/shortstop Xavier Allen was a key piece for the Coyotes. As a batter, Allen had a batting average of .445 with five home runs and 35 RBIs. As a pitcher he threw 56 innings and totaled over 80 strikeouts. His ERA for the season was 3,125. Allen would be named to the CSAA Gold all-conference team and the all-district team.

“This season he really began to step into the leadership position that we have been waiting for.” Grannis said. “We expect him to have a great season next year in all phases.”

Senior infielder Treyvor Conklin was the leadoff hitter for the Coyotes, with a batting average of .319 with two home runs. He notched 24 RBIs this season. He was named to the All-Conference and the All-District team.

“Treyvor was thrust into a different role at the end of April this season. For his entire varsity career, he was in the middle of the order.” Grannis said. “This season we decided to put him in the leadoff spot, and he took off.”

Junior Noah Morgan was another strong pitcher for the Coyotes. Pitching 58 innings, Morgan notched a 2,534 ERA for the year with 69 strikeouts. He went 6-2 on the year. Morgan would be named as an all-conference honorable mention while also being named to the All-District team.

“Noah was one of the most clutch pitchers that we had all year.” Grannis said. “He threw in some highly competitive games this season, and did so extremely well.”

The Coyotes will look to go even further next season, and they will have a few spots to fill after graduating Trent Howell, Conklin, Isaiah Moore, Canyon Reed, and Bryce Wein.

“We have some development that we know we are going to have to do.” Grannis said. “We have four spots that are up for grabs, and the players are up to the challenge.”