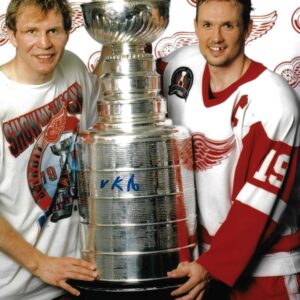 Fan Tammy Chinn posted a video of Vladdie on Twitter. She asked Konstantinov to say who Detroit’s best player is

@DetroitRedWings when Vladdy was asked who was the best Wings he said Mr Yzerman @woodwardsports pic.twitter.com/ZzHyt8w9G0

Konstantinov lost his previously-state funded medical coverage because of a change in Michigan insurance law. The new law went into effect June 1.

Konstantinov suffered permanent brain damage when he was injured in a 1997 sedan accident. The accident happened after a Detroit Red Wings golf outing. He was in the prime of his career. The Red Wings had just won the Stanley Cup.

Under the old law, Michigan residents who suffered serious traffic-related injuries had access to lifetime coverage from funds from the state’s car insurance policies. The law was changed with the hope of reversing the state’s skyrocketing insurance rates.

Several groups, including the Detroit Red Wings, are stepping up to help pay some of his living expenses. A GoFundMe page is set up. As of this morning, more than $42,000 has been raised. The goal is $250,000. Konstantinov’s daughter Anastasia manages the fund. Nine hundred and twenty-eight people have donated money.

Konstantinov, 55, has also been making a few more appearances, like the one he made Sunday. Former Detroit Free Press hockey writer Keith Game posted some photos on Twitter. Konstantinov’s caregivers believe the signings and appearances are good therapy for him.

Alan Moore, through his company SportsGraphing.com, has raised thousands of dollars for the cause through the sale of autographed Konstantinov memorabilia. All funds raised from these sales go directly to Konstantinov’s Special Needs Fund.

What an amazing honor to help out today with the Vladimir Konstantinov public photo opportunity at @ProSportsZone1 Former Wings Coach Dave Lewis showed up to see Vladdy. @DetroitRedWings @woodwardsports pic.twitter.com/Gq2pdZjACV