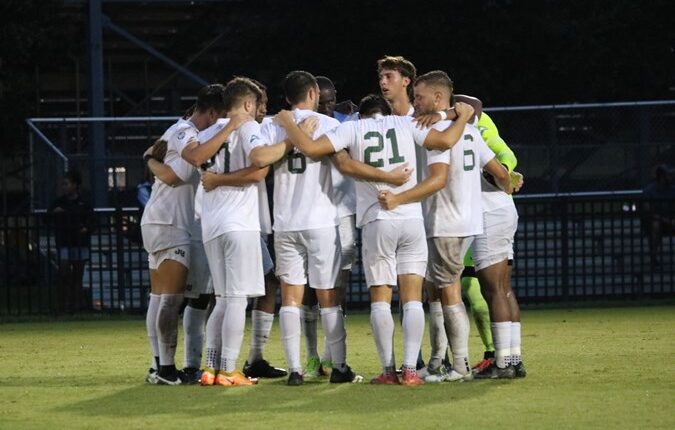 JACKSONVILLE, FLA. – Jacksonville Men’s Soccer opened their season on Thursday night with a hard-fought, rain laden match against Detroit-Mercy that saw the ‘Phins score late to force a 2-2 draw.

With the rain pouring down, the Dolphins fell behind early when Detroit-Mercy’s Matthew Andres headed home a nice cross to put the Titans up 1-0 in the seventh minute.

Just over five minutes later Jacksonville would receive a free kick ten yards outside the box. That is when Moussa Sabaly lofted a perfect ball over the defense that was finished off by a flying Shane Clancy on the back post.

The rest of the first helped was highly contentious as the two teams traded possession back and forth. Freshman goalkeeper Christian Sekanina made one save to keep the score locked at one apiece.

The second half was all Jacksonville as the ‘Phins kept possession for what felt like the entire 45 minutes. The Dolphins went on to notch nine shots on goal in the first 35 minutes of the half before Detroit-Mercy would jump out on the counter attack and score to go up 2-1.

With the clock starting to wind down Jacksonville had only a few more opportunities to bring the game level, and that is when Moussa Sabaly put another great cross into the box that bobbled around and was hammered home by team captain Joshua Araujo-Wilson to square the match with just over two minutes remaining.

The Dolphins would carry that momentum into the final two minutes but would unfortunately run out of time as the horn sounded finishing the game at two goals a side.

Moussa Sabaly had a breakout performance as the Junior transfer introduced himself to Dolphin fans with two assists, while Shane Clancy also made a splash scoring in his Dolphin debut.

Sekanina would finish with a single save in his green and white debut.

Jacksonville will now enjoy a couple days of rest before hitting the Southern Oak Stadium field again this Sunday when they host Wright State at 1 pm.

In Northern Michigan, bison are teaching a lesson in sustainability

Abortion should be a kitchen table conversation ⋆