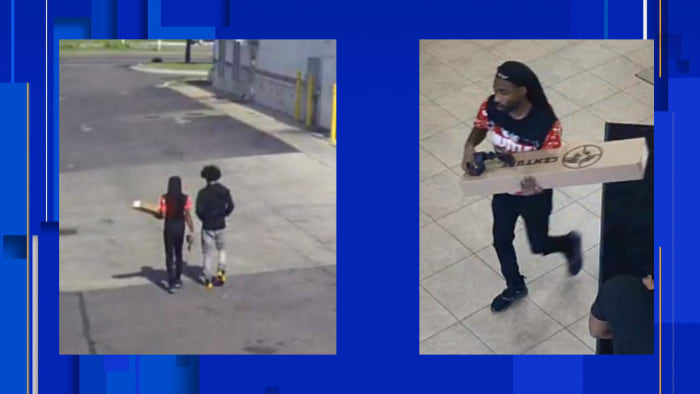 DETROIT – A 26-year-old man is set to appear in court Monday afternoon in connection with federal charges related to the alleged straw purchase of a firearm that was used by another man to shoot and kill a Detroit police officer.

Sheldon Thomas, of Detroit, was charged Sunday, July 10, with illegally purchasing a firearm that was later used by a different man in the killing of Detroit police officer Loren Courts. Thomas is scheduled to appear in court for a preliminary hearing at 1 pm on Monday, July 25, at the Theodore Levin US Courthouse in Detroit.

Thomas is accused of buying a pistol from a gun store in Eastpointe on June 7, and then later that day meeting up with another man in a nearby parking lot to sell the gun.

Photos of that exchange can be seen above. Officials say the interaction was captured on surveillance cameras.

The man who purchased the firearm from Thomas was identified as Ehmani Davis, 19, who is accused of fatally shooting Courts on Wednesday, July 6. Courts and his partner were responding to a scene in Detroit that evening, in which the officer and father of two was shot and killed.

Davis was killed by officers who returned fire. Investigators now say that Davis and Thomas were best friends.

According to the US Department of Justice, Thomas allegedly made false statements when purchasing the firearm, saying he was buying it for himself and not for another person. Purchasing a firearm for someone who is legally prohibited from possessing one can be chargeable with 10 years in prison time, US Attorney Dawn Ison said earlier this month.

Thomas was ordered earlier this month to remain lodged in jail pending trial. The man reportedly appealed that detention order, and another hearing on that matter is scheduled to take place at 2 pm on Tuesday, July 26.

You can read the entire criminal complaint against Thomas below.