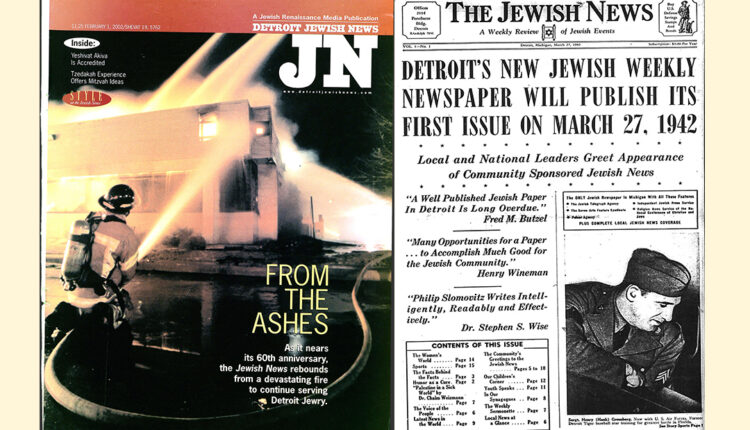 the JN would not exist, let alone enjoy an 80-year run, without you, our readers.

On March 27, 1942, the first issue of the Detroit Jewish News what published. Eighty years later, the JN is still published every week. It has been a remarkable run for one of America’s prominent English-language Jewish newspapers.

the JN saga began when Philip Slomovitz (1896-1993) resigned as editor of the Detroit Jewish Chronicle in 1942. Editor of that newspaper since the early 1920s, Slomovitz was not happy with limits upon his personal ideas regarding the role of a Jewish newspaper. the Chronicles tepid reporting regarding the events of Kristallnacht was the last straw for him.

Slomovitz was not alone in his opinion. Hey quit the Chronicle, and with Investments from the Jewish Welfare Federation (now the Jewish Federation of Metropolitan Detroit) and prominent Jewish Detroiters such as Leonard Simons, Fred Butzel, Federal Judge Theodore Levin and Maurice Schwartz (co-publisher), he launched the Detroit Jewish News.

At that time, American Jews faced several massive ideological questions, with divided opinions among the members of the religiously diverse Jewish community in America and Detroit.

One important question: In an era of rampant antisemitism, led by right-wing populists like Father Charles Coughlin and GLK Smith, should Jews aggressively call out their antisemitic speeches and behaviors? Or would such protests increase hatred toward Jews?

Also important were these questions: Should American Jews support the Zionist vision of a homeland in the Middle East? Or would it be better to just concentrate on promoting themselves as good citizens of the United States? What communal groups should the local Jewish community support? WWII was raging in 1942 — what should America do about the atrocities occurring to Jews in Nazi-occupied Europe? And, how should America deal with the problem of Jewish refugees before, during and after the war?

Then, as now, there was a wide range of opinions about these questions as well as other important issues facing American and Detroit Jews.

In 1942, Slomovitz decided the JN would take firm positions on the leading issues of the day. While attempting to listen to all voices, the JN, nevertheless, staked out principles that were largely his personal convictions.

The newspaper would educate its readers on the local, national and international affairs that affected Detroit’s Jewish community. It would fight anti-Semitism wherever and whenever it was found; it would promote the growth of and participation in local Jewish communal organizations; it would be an amazing supporter of Zionism; and, as Slomovitz stated, the JN would “never be silent whenever there is the merest semblance of injustice anywhere.”

These original principles have served the JN well throughout its history.

Within a few years, Slomovitz bought out the investors and became the sole owner and publisher of the JN. In 1951, he bought the Jewish Chronicle and merged it with the JN. Along the way, Slomovitz become widely known as the “Dean of English-Language Jewish Editors.” Not a bad career for a Russian-born immigrant with eyesight so poor that, in the later years of his life, he was legally blind. Slomovitz continued to write a column for the JN until 1990. He passed away three years later at age 96.

In 1984, Slomovitz sold the Jewish News to Charles “Chuck” Buerger, the grandson of the founder of the Baltimore Jewish Times. Two years later, Buerger hired Arthur Horwitz to lead the JN. Horwitz moved to Detroit, beginning a 36-year career with the JN. In 2000, with other investors, Horwitz purchased the JN and continued as publisher.

Both Slomovitz and Horwitz are now ensconced in the Michigan Journalism Hall of Fame.

Horwitz remained publisher until Oct. 1, 2020, when the JN became the property of the Detroit Jewish News Foundation. On Jan. 1, 2021, the Foundation was restructured to manage the publishing of the JN and the William Davidson Digital Archive of Jewish Detroit History under the leadership of Board Chair Gary Torgow and Senior Advisor to the Board Mark Davidoff.

The past 80 years have been exciting, often tumultuous, to say the least. When the JN was established during WWII, it had the important, but particularly horrific duty of reporting the slaughter of Jews at the hands of Nazi Germany — the devastation into the abyss of the Holocaust. At the same time, the JN also reported about the Jewish community development in British-mandate Palestine. In May 1948, the news was joyous — the State of Israel was declared on May 14, 1948. This was the lead story for May 21, along with reports of celebrations in Detroit. Since then, the JN has followed events in Israel with a keen eye. A Keeper of History

As Detroit’s Jewish community moved from the city to the northwest suburbs, the JN followed. Its offices moved from the Penobscot Building in Downtown Detroit, to Seven Mile, to several locations in Southfield, and to its current home in Farmington Hills. It also continued to provide extensive reporting about and announcements of local communal events, as well as other stories from Metro Detroit’s and Michigan’s Jewish communities.

the JN itself had a dramatic moment on Jan. 27, 2002. Its offices in Southfield were destroyed by fire. For the only time in its history, the JN was published late. In a remarkable feat, while temporarily housed in the ballroom of the nearby Embassy Suites Hotel, using borrowed equipment, the JN staff pulled together and published the weekly JN. This issue was, however, only one day late!

The fire also led to another significant achievement. Miraculously, the back issues of the JN were saved. The Jewish community nearly lost an invaluable record of its history. Publisher Horwitz then established the Detroit Jewish News Foundation with a mission of digitizing all back issues of the Detroit Jewish News and making them available to the public. It was a great success. In October 2013, the online Detroit Jewish News digital archive was launched. Two years later, the Detroit Jewish Chronicle was digitized and added to the Archive. It was then renamed the William Davidson Digital Archive of Jewish Detroit History in honor of a major grant from the William Davidson Foundation. In 2018, the Archive also became a permanent collection at the Bentley Historical Library at the University of Michigan.

Nothing mentioned above, however, could have been accomplished without JN editors and leaders such as Philip Slomovitz, Gary Rosenblatt, Phil Jacobs, Robert Sklar and Arthur Horwitz, and current Editorial Director Jackie Headapohl and Foundation leaders Gary Torgow and Mark Davidoff. Hundreds of dedicated reporters, editors, writers, columnists like Danny Raskin, advertising salespeople, and publishing staff contributed their creativity and talent to the task. Indeed, neither paper nor websites make a successful journal — it is the staff who create and distribute the JN.

This leads to the final point of this brief history. the JN would not exist, let alone enjoy an 80-year run, without you, our readers. You are the people whom we strive to engage and to serve. the JN‘s mission, as stated in each issue, is, in part, to “inform and educate the Jewish and general community to preserve, protect and sustain the Jewish people of greater Detroit and beyond, and the State of Israel.”

Thank you for your loyalty and support for the Detroit Jewish News.

Want to learn more? Go to the DJN Foundation Archives for free at www.djnfoundation.org.

Lansing has the meats | City Pulse