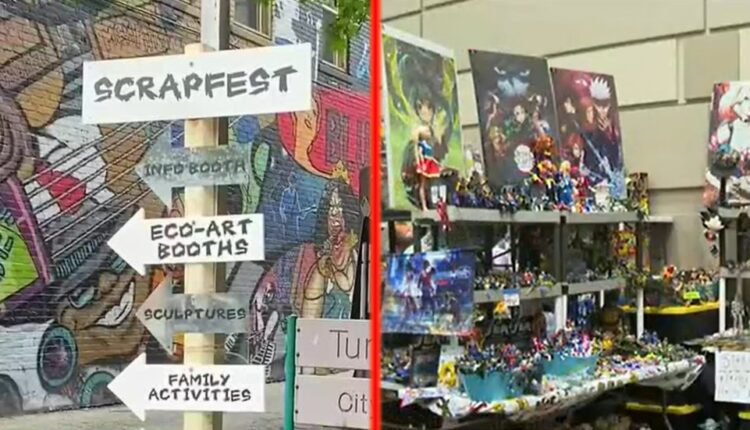 LANSING, Mich. (WILX) – After a two-year hiatus due to the pandemic, two festivals returned to Lansing.

Friday was the kick-off of the Capital City Comic Con and ScrapFest in Old Town, which brought tourists into Lansing.

The first night of ScrapFest was a success. Thousands poured into Old Town to check out the amazing pieces brough from Michigan artists.

It’s the first time in two years that Robert Mendoza was able to showcase his work. As a comic con artist, he relies on events like Capital City Comic Con.

“Cons, in my opinion, are the best way for people of similar interests to get together and support one another and show, like, ‘Hey, I got this really cool thing,’” Mendoza said.

He had been working with comic cons for more than a decade before they were sidelined by the pandemic. Before then, many artists and businesses relied on those attending events to spend money. Now that they’re back, Mendoza said he’s optimistic.

“It brings out local artists, it brings revenue in, it brings exposure and you know big celebrities get to come to small towns,” Mendoza said. “Honestly, for one day, it’s not bad. I wasn’t expecting a lot on day one. There’s never a whole lot on day one.”

On the other side of town, a different kind of artists set up shops with the same high hopes.

Benjamin Weiss and his team worked day and night leading up to Friday.

“We had four weeks to put it together and bring it here and put it on the street and everybody gets to judge it,” Weiss said.

ScrapFest artists each had an hour to scrap through a recycle yard. In teams of four, each member had 15 minutes to find their money piece.

“To pick whatever they could find based on a concept or design on a napkin,” Weiss said.

He was happy with his teammates’ scraps, but he’s more happy with the finished product. Weiss said it was a rough two years not being able to show their work, but even harder to make a living.

“There’s a lot of work involved but it pays off,” Weiss said. “You see the people, the people enjoying themselves, it gives people something to do and it gives a lot of artists to showcase what they’ve been hiding.”

Weiss said Friday was a good day, but he thinks Saturday will be even better.

Aside from the artists, businesses said the past two years were difficult without the economic boost of events. Now that doors are open, they’ll stay that way all weekend.

More information on ScrapFest can be found on its official website.

The Capital City Comic Con will run through Sunday at the Lansing Center. More information can be found here.

In America, Cancer Patients Endure Debt on Top of Disease