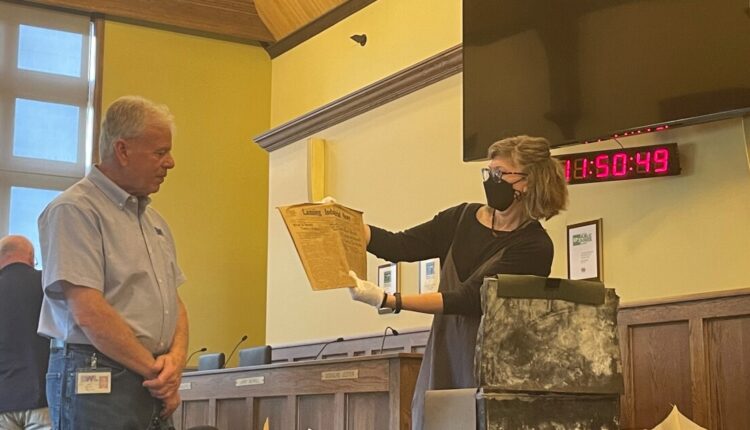 Lansing residents are getting a peek into 1922.

Officials with Lansing’s Board of Water & Light opened a 100-year-old time capsule on Friday. The copper box had been soldered shut and buried in a brick cornerstone of what’s now known as the Eckert Power Station along Grand River Avenue in south Lansing.

That plan was recently decommissioned as the BWL makes way for cleaner energy, but artifacts from the time of its 1922 unveiling have been preserved. That includes architectural drawings, calling cards, a silk American flag with 48 stars and a silver dollar that would be worth more than $17 today.

“The State Journal paper in there, it was in really good shape,” Peffley said. “I opened the classifieds (to), you know, see what things cost 100 years ago.”

Heidi Butler, a local history specialist with the Capital Area District Library, donned plastic gloves to help handle those items Friday. She said, aside from some damage like mold on leather-bound volumes, the artifacts were remarkably intact.

And today’s BWL officials hope their own message will survive for Lanstronauts of the future.

Officials with the city-owned utility plan to bury another time capsule this year at the new gas-powered plant in Delta Township.