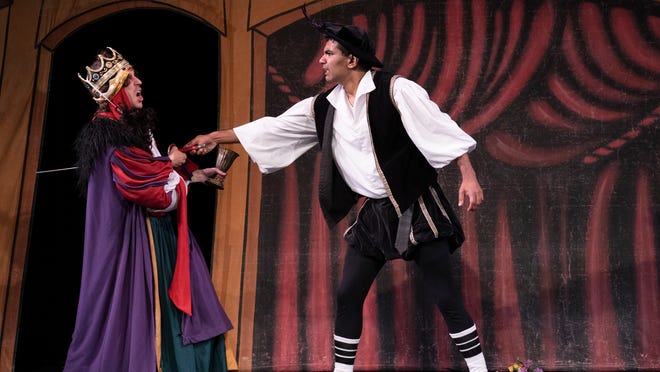 In one hour and 15 minutes, a cast of just three actors tears through all 37 of William Shakespeare’s plays in a gut-busting parody that leaves audiences howling with laughter.

That’s the simple premise of “The Complete Works of William Shakespeare (abridged) (revised),” a mile-a-minute, 1980s stage comedy by playwrights Adam Long, Daniel Singer and Jess Winfield. Shakespeare in Detroit (SiD) will present the show May 18-29 in its new home at the Marygrove Conservancy, 8425 W. McNichols Road in Detroit.

SiD, in its 10th year, returns after four years away from professional programming with the production, powered by a new team and vision. In recent years the company has focused on educational work.

“This season is special because it’s the first year that we’ve had a permanent residence,” said SiD founder Sam White. “That’s really unique in Detroit for a small or medium sized theater (company), to have a home in which to build work. We now have our own costume shop, our own offices, and great access to the theater here at Marygrove. There are a lot of (companies) that rent the space, but we’re here permanently.”

White said “Complete Works” was a “great vehicle” for reintroducing the company after two years of the COVID-19 pandemic.

“It’s a sprint,” she said. “All 37 plays from Shakespeare’s canon brought to life in an hour and 15 minutes by three actors. And, you know, if people want to laugh with Shakespeare or at Shakespeare, they can do it with this play. So it was a perfect way to give people some real levity as we reemerge from the pandemic.”

Director Reed Martin and actors Gabriel Ross, Lijesh Krishnan and Tré Zijuan Tyler were flown in from San Francisco’s African-American Shakespeare Company for the show, and Martin agrees that the play works for people both familiar and unfamiliar with the Bard’s work.

Cast member Krishnan enjoys the broad physical comedy called for in the script.

“It’s really funny,” he said. “I mean, it’s hilarious. It’s very physical — each performance is a workout. And it’s really tongue-in-cheek, but it’s got something for everyone. The Shakespeare aficionados are going to get a lot of the in-jokes and spoofs, but if you’re a kid, there’s a lot of physical stuff and running around and slapstick.

“There’s ‘Romeo and Juliet’ and ‘Macbeth’ and the tragedies in there too, even, but we get through them quickly and three actors are running around playing a bunch of different roles and changing costumes. It’s a lot of fun.”

Martin referenced old Looney Tunes animated shorts that parodied classic operas like “The Barber of Seville,” which amused children who didn’t know classical music, but, without realizing it, found appreciation through enjoying the cartoons.

“If you don’t know anything about Shakespeare,” he said, “well, it’s fast, it’s funny and it’s physical, and you can enjoy it at that level. So it’s a really great introduction for people who don’t know Shakespeare to come in. It’s very accessible in that way.”

“The Complete Works of William Shakespeare (abridged) (revised)” opens Wednesday and closes May 29. Show times are 7:30 pm Wednesdays, Thursdays and Fridays, with two shows on Saturdays at 12:30 pm and 7:30 pm, and Sunday matinees at 12:30 pm

The show runs 75 minutes with no intermission. Tickets are $45 for general admission and seating. Go to ShakespeareInDetroit.com to purchase.