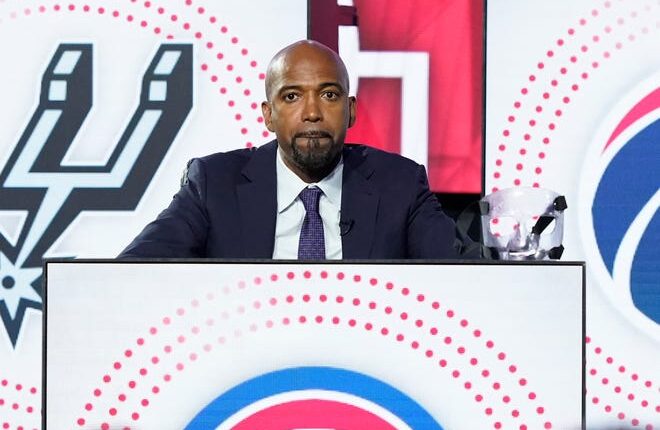 Detroit Pistons fans were disappointed by the results of Tuesday night’s NBA Draft lottery in Chicago.

Pistons general manager Troy Weaver on the other hand? Not that much.

Detroit, for the second time in franchise history, fell exactly two spots in the lottery and received the No. 5 pick in the 2022 NBA Draft, which is slated to take place on June 23.

And while there’s talk of a “big three” in their own tier at the top of the draft, where many Pistons fans were hoping to land, Weaver certainly doesn’t see it that way. Forwards Jabari Smith (Auburn), Paolo Banchero (Duke) and Chet Holmgren (Gonzaga) are all poised to contend for the No. 1 selection, with guard Jaden Ivey (Purdue) close behind.

The other instance of Detroit falling two spots came in 2020, when Detroit fell to No. 7 and selected Killian Hayes.

There isn’t a consensus no. 1 pick in this year’s draft — as opposed to last season, when the Pistons grabbed Cade Cunningham with the top selection — but Weaver said that he doesn’t see this year’s talent as much of a drop-off from a year ago.

“I like this draft as much as last year’s draft. That can be debated, but I’m comfortable with the players that are slated in the top half of the lottery,” Weaver said.

“I think it stacks up very well versus last year’s picks.”

There’s still plenty of pre-draft scouting to be done — including the NBA Combine, which began Monday and runs through Sunday — but Weaver said “there’s no disappointment about where we’re picking” and that he would be comfortable making his selection today, if he had to.

“We could pick No. 5 right now. We want to continue to process, but if we had to pick today, yes, I feel comfortable that we could pick someone that we would be happy with, for sure,” Weaver said.

The Orlando Magic won the right to select No. 1 for the fourth time in franchise history. The Oklahoma City Thunder will pick second, the Houston Rockets third and the Sacramento Kings fourth.

The Pistons, Rockets and Magic all had an equal chance of winning the lottery at 14%, and a 52.14% chance of picking in the top four. Detroit had a 14.84% chance of landing the fifth pick; their most likely selection was No. 6 at 26%, so one could argue the Pistons outperformed expectations.

When it comes to how he’ll approach making the no. 5 selection, Weaver said that he does plan to factor in his current roster into his decision.

“Absolutely, we’re gonna pick a guy that fits best with our organization moving forward,” Weaver said. “He’ll have the same attributes that these other guys have. You absolutely factor in Cade and the rest of the guys, especially because these guys have so many similarities.”

In earning the right to select Cunningham out of Oklahoma State with last year’s No. 1 pick, the Pistons have appeared to expedite their rebuild. Cunningham, a 6-foot-6 guard, started in all 64 of his appearances this past season and averaged 17.4 points, 5.5 rebounds and 5.6 assists.

He finished third in NBA Rookie of the Year voting behind Toronto’s Scottie Barnes, who won the award after being drafted fourth, and Cleveland’s Evan Mobley, taken by the Cavaliers with pick No. 3.

While the selection of Cunningham at No. 1 was certainly a success, Weaver didn’t need any lottery luck to add talent in his first draft as Pistons GM. Both Isaiah Stewart (pick No. 16) and Saddiq Bey (No. 19) made All-Rookie teams after being selected outside of the lottery in 2020.

Cunningham has not yet been named to the All-Rookie team for the 2021-22 season, but one can assume based on Rookie of the Year voting that he’ll be on that list when it’s announced.

“There’s a certain culture here. Working hard, being selfless. Coach (Dwane) Casey’s coaching staff has done that,” Weaver said. “We’re confident because the last two drafts, we’ve had three players make All-Rookie, so we’re very comfortable with our culture here and what our coaches have been able to do with these young players.”

The lottery determined the top four picks in this year’s draft, with the remaining lottery teams selecting in positions 5-14 in inverse order of their 2021-22 record.

The Pistons finished with the third-worst record (23-59), behind Houston and Orlando, meaning they had the ability to pick as low as No. 7 if picks 1-4 were all won by teams outside of the top four.

The Kings were the only team to make that leap, landing a pick that they had an 8.52% chance of getting heading into the night.

Ben Wallace represented the Pistons at the 2021 draft. This year, they were represented by another member of the “Goin’ to Work” era in Richard “Rip” Hamilton, who had his famous mask on-stage with him at the lottery.

Heading into this year’s lottery, the Pistons in 15 tries had moved up in the lottery just once, when they leapfrogged Houston from the No. 2 position last year. Detroit moved down in the lottery in six of those years and remained in their pre-lottery position on eight occasions.

The Pistons on Tuesday matched their biggest fall in the lottery in 2020, when the Chicago Bulls (from the No. 7 spot) and Charlotte Hornets (from No. 8) both moved up into the top four.

Nolan Bianchi is a freelance writer.