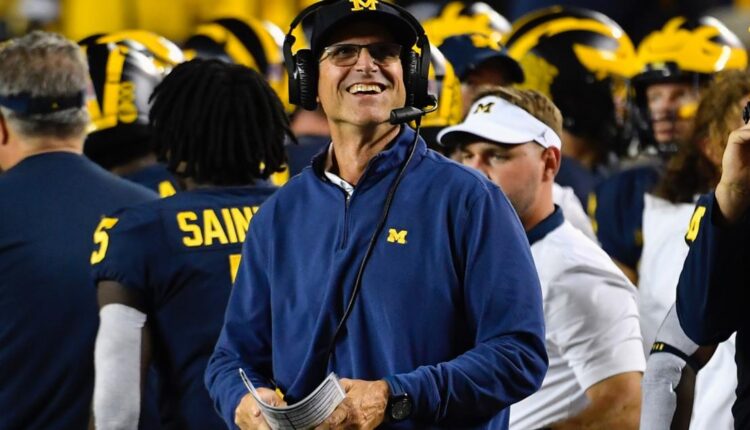 Jim Harbaugh is a Michigan man … through at least 2026.

The University of Michigan and Harbaugh agreed Wednesday to a contract extension to keep the coach in Ann Arbor for the next five seasons.

The University of Michigan and head coach Jim Harbaugh have agreed to a contract extension.

“I love Michigan Football, the University of Michigan and the Ann Arbor community,” Harbaugh said in a statement. “My family and I are excited to continue leading this football program, and we are thankful for the support that our athletic department and university administration have demonstrated toward the team.”

Harbaugh is coming off a College Football Playoff appearance, a Big Ten championship and, most importantly, a win over Ohio State, all firsts for him as the Wolverines’ head coach.

Here’s what we know about Harbaugh’s new contract:

The extension is a five-year deal that keeps the khakis in Ann Arbor through the 2026 season.

Harbaugh’s new annual salary hasn’t been reported yet, but expect that he’ll receive a significant raise from the $4 million he was reportedly making this past season.

In 2021, Harbaugh took a pay cut as questions were raised about his future because of the middling results he had produced as Wolverines coach. The deal included multiple incentives.

Harbaugh and the Wolverines responded by having their best season in the coach’s tenure. They finished the regular season 12-1 after winning the Big Ten championship. They clinched a berth in the College Football Playoff, where they were downed by eventual national champion Georgia in the Orange Bowl.

The timing isn’t all that curious: The agreement came together after Harbaugh showed interest in returning to the NFL. The Vikings, Bears, Raiders and Dolphins all reportedly had interest in him, and the Vikings interviewed Harbaugh for their open head coach position before turning to Rams offensive coordinator Kevin O’Connell.

Some reports indicated that Harbaugh wanted a big-money contract, with some speculating he wanted a “Jon Gruden-type deal” that would have paid him nine figures.

For now, Harbaugh still makes his bed in Michigan.