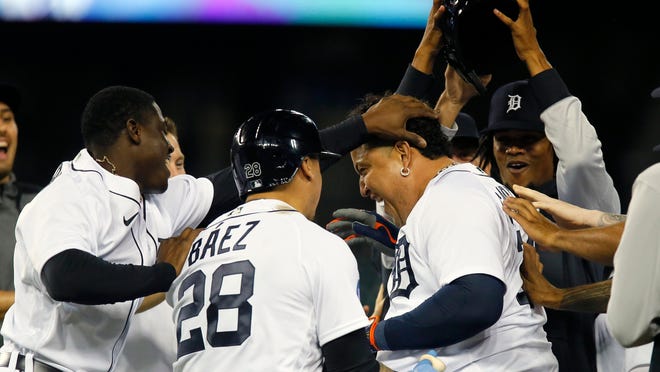 “When you’re ahead in the count, you’re almost 100% certain that you’re going to win the battle,” Rodríguez said Saturday. “It’s important.”

Rodríguez, who turned 24 at the end of March, made his MLB debut April 10 out of the bullpen, but he was optioned soon after to Triple-A Toledo to build up his stamina as a starting pitcher.

The Tigers, due to a slew of injuries, added Rodríguez to their rotation Monday to face the Minnesota Twins at Target Field. He’s slated to make his second start Sunday against the Cleveland Guardians at Comerica Park.

“I’m preparing myself, both physically and mentally,” Rodríguez said.

Against the Twins, Rodríguez allowed four runs on four hits and three walks with four strikeouts in five innings. All four runs scored on a first-inning grand slam; Rodríguez then cruised through the second, third, fourth and fifth frames.

He threw 43 of 75 pitches for strikes, good for a 57.3% strike rate. He used his fastball, slider, changeup and curveball, logging six swings and misses: one on his fastball, two on sliders and three on changeups.

“He’s likely to get a couple starts during the time where our rotation is being re-shifted,” manager AJ Hinch said last week before Rodríguez’s first start. “We’d like to see strikes and would like to see him get into the fifth, sixth, seventh innings with the lead. He’s got pitches to do it.”

Rodríguez, before joining the Tigers, posted a 3.57 ERA with 13 walks and 21 strikeouts over 22⅔ innings in six games (five starts) for the Mud Hens. He pitched 18 of 19 games last season for Double-A Erie.

HINCH ON MANNING: New injury shuts down Matt Manning ‘for the foreseeable future’

MANNING EXPLAINS: Why Matt Manning didn’t speak up about latest injury: ‘It kills me’

Alexander is the closest to returning. He starts Monday for Toledo, beginning his rehab assignment. Once Alexander returns, Rodríguez or Rony García could get bounced from the rotation.

Rodríguez plans to make sure he gets to stick around.

“My focus is on working hard and helping my team win, and showing and proving that I can be a starter here,” Rodríguez said. “But basically, my main goal is to help this team win and open their eyes so they can see what I’m capable of doing.”

Because of Friday’s postponement, the Tigers pushed their entire rotation back one day: Alex Faedo starts Saturday, followed by Rodríguez on Sunday, Beau Brieske on Monday and García for the first game of Tuesday’s doubleheader.

For the second game Tuesday, right-hander Joey Wentz will make his second MLB start. The 24-year-old, currently with Toledo, is lined up to join the Tigers as the 27th player.

Wentz appeared in his MLB debut, starting part of a May 11 doubleheader against the Oakland Athletics. He allowed six runs on seven hits and two walks with one strikeout in 2⅔ innings, throwing 41 of 73 pitches for strikes.

Willi Castro and his old friends

Before Friday’s rainout, Tigers left fielder Will Castro spent time chatting with some of his old teammates.

He signed with the Guardians as an amateur free agent in July 2013 and stayed in Cleveland’s organization until July 2018, when he was traded to the Tigers for Leonys Martin. He made his MLB debut in August 2019.

TAKEAWAYS FROM MINNEAPOLIS: Tigers reliever Alex Lange has a sudden serenity on the mound. Here’s his secret

Castro, 25, is friends with Guardians pitchers Shane Bieber, Triston McKenzie and Zach Plesac. He also knows Óscar González, who made his MLB debut in Thursday’s series opener and finished 2-for-4 with a double.

“I played with them in the minor leagues,” Castro said.

Saturday, Bieber starts against the Tigers.

Castro is 2-for-14 (.143) in his MLB career against Bieber, tossing in one home run, three RBIs, one walk and seven strikeouts across 15 plate appearances. They played together for High-A Lynchburg in 2017.

“I never got to face him in a live BP or anything, but I know he has some good pitches,” Castro said. “Once I got traded, that’s when I had the opportunity to go against him. I’ve seen him a lot, so I just got to go out there and battle and know the pitches that he’s going to throw.”

Castro is hitting .269 with three doubles, one home run, four RBIs, five walks and 14 strikeouts in 27 games. His strikeout rate has improved, from 24.2% last season to 16.5% this season.

“I feel really good,” Castro said. “You go through some ups and downs sometimes. That’s part of baseball. I feel really good and really prepared. It’s just about going out there and winning some games.”