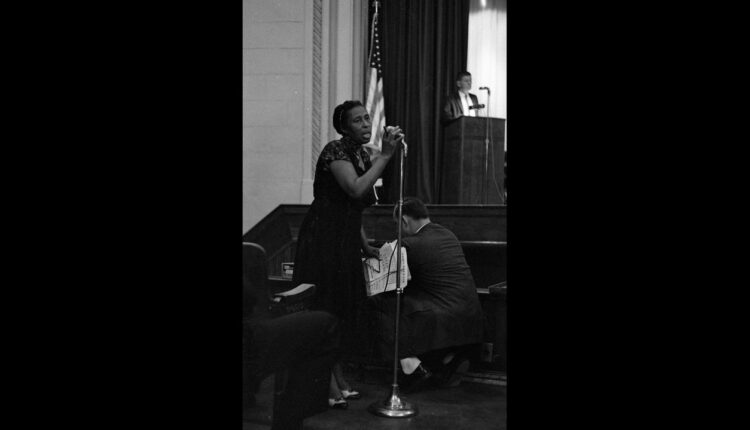 YPSILANTI, MI – More than a decade before she would become Ypsilanti’s first Black woman elected to City Council, Mattie Dorsey stood outside those same halls of local power and led protestors singing spirituals to drown out a vote that would reshape her neighborhood.

Dorsey found herself in the midst of a life-defining struggle against urban renewal, a massive federal program that let cities seize and clear tens of thousands of acres of so-called “blighted” property across the nation, shunting out families and turning the land over to developers.

In practice, the mass razing of homes disproportionately hit communities of color, like Dorsey’s beloved Southside.

“What bothers me most is the human suffering which will result,” she then told a reporter.

The Louisiana native who called Ypsilanti home for much of her life attended 204 straight City Council meetings, tarred urban renewal signs and fought the city in court for years after the program eventually moved forward.

She ran for local office four times without success, before finally winning an election to City Council in 1975 by 64 votes, becoming the first African American woman to do so.

Even decades later, the city’s Black leaders and community activists still draw strength from Dorsey’s legacy — and see parallels between today’s struggles and their battle against displacement.

“Back before it was even fashionable or the thing to do, Mrs. Dorsey was marching the streets with her banner,” current Ypsilanti Mayor Lois Richardson said. “She was really quite the leader.”

George Goodman, who served as Ypsilanti’s mayor for much of the 1970s and when Dorsey was elected, grew up a few blocks from where she lived on Jefferson Street.

As a kid, Goodman said he’d run over to pick up food at a Dorsey store and her husband James ran there, the Progressive Cooperative Grocery, where Goodman’s name was as good as currency.

Dorsey was kind, well-known on the tight-knit Southside, Goodman said.

The area was a Black community in a segregated city.

Restrictive whites-only covenants and early federal refusal to insure mortgages in Black neighborhoods through New Deal programs, a policy known as redlining, meant as the neighborhood boomed during the wartime economy of the 1940s, many arrivals built their own homes or relied on precarious land contracts.

That’s according to Lee Azus, a historian of Ypsilanti’s urban renewal program, who sketched a portrait of official and unofficial discrimination that penned many Black residents into the area even after desegregation in a 2020 podcast interview with Ypsilanti District Library.

Azus says the city declared a “code war” on many Southside buildings, documenting conditions that could be used to declare them “sub-standard” and justify plans to have them demolished.

The Parkridge Urban Renewal Project crafted in 1960 covered a 109-acre swath between Harriet Street and city limits, conveniently allowing the city to count construction costs for new nearby schools as their contribution to the federal program.

Officials avoided the uncomfortable question of where residents would go when the city used eminent domain to buy their properties, Azus says.

In 1961, she founded the Ypsilanti Property Owners Association, a group dedicated to opposing the project on the grounds urban renewal was a “segregated government program” with no relocation plan and no city protections for residents looking for new homes in other areas.

The group tried to force the city to let the Southside hold a vote on the program, which it briefly promised to do before reneging on the idea, according to Azus.

Dorsey fought Ypsilanti officials at every turn, reportedly snatching a measuring tape and map from a surveyor’s hands when they visited her store, according to a news article from the time.

“We don’t want urban renewal – we don’t need it – let us alone to progress as we are financially able,” the Ypsilanti Daily Press quoted her as saying in 1961. “How can urban renewal help if some of us are unable to qualify for mortgage loans now?”

Southside residents picket outside the Ypsilanti urban renewal field office on May 27, 1961.The Ann Arbor News archives courtesy of OldNews.AADL.org

A resident’s letter to the editor in 1961 accused her group of mounting a “witch hunt,” oblivious to the advantages of the program framed as improving the housing stock.

A group of prominent Southside residents called the Parkridge Neighborhood Council boosted the plan, including realtor and publisher Herbert Francois, who owned lots of property in the area, according to Azus.

Some of the first Black members of the City Council, including Amos Washington and John Burton, who would go on to serve as the city’s first Black mayor, also supported the program, Azus said. 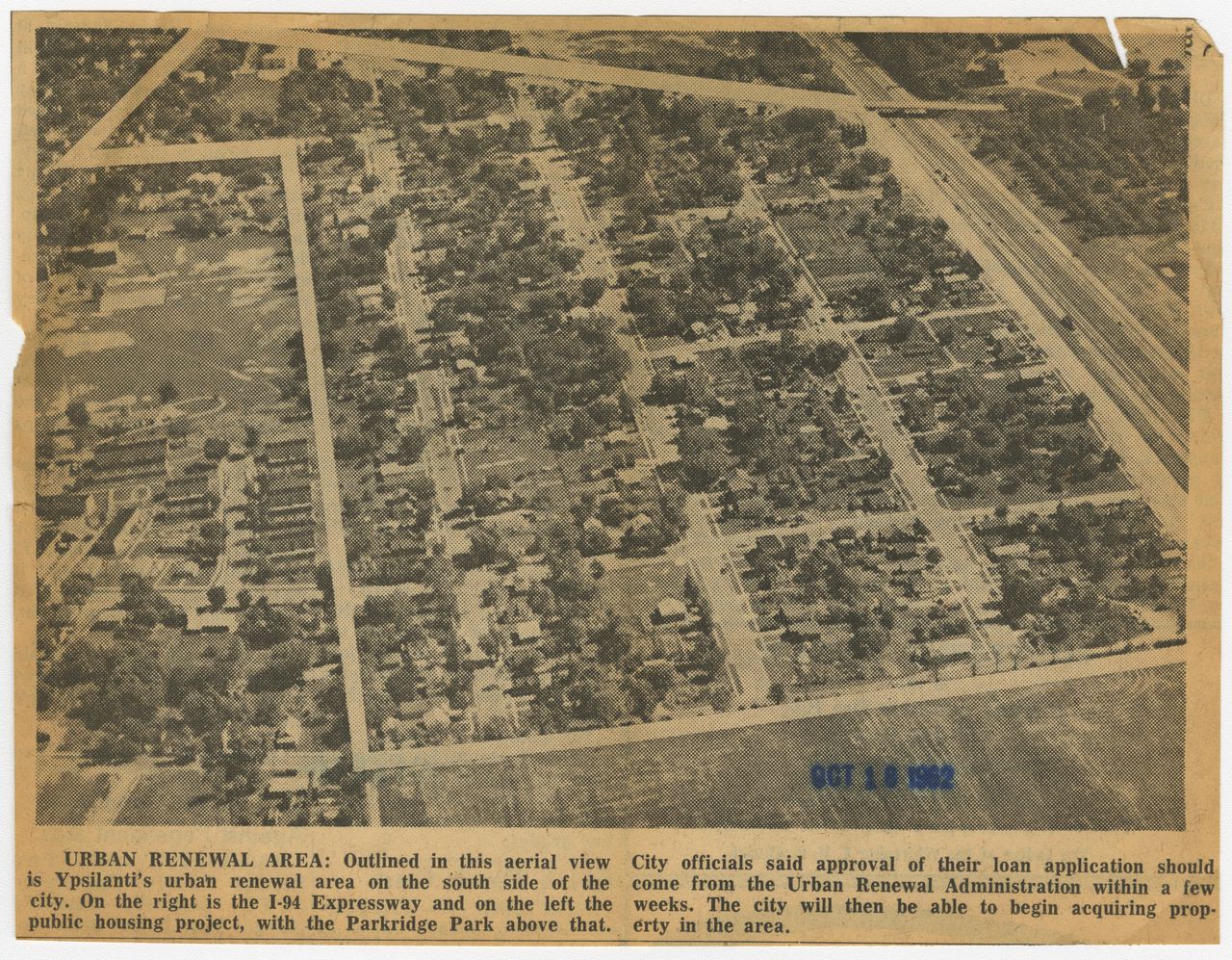 to october 10, 1962 clipping from The Ann Arbor News shows the boundaries of the Parkridge Urban Renewal Project on Ypsilanti’s Southside on an aerial photo of the neighborhood. The project demolished many buildings within the rough area between I-94, Huron Street, and Harriet Street.The Ann Arbor News archives courtesy of OldNews.AADL.org

Goodman remembers the controversy, driven by some residents’ fears the program would amount to “urban removal,” driving minorities not welcome in other parts of Ypsilanti from the city.

His parents, owners of Goodman’s Fashion Center on Harriet Street, took the opportunity as a chance to retire. Goodman himself was in the urban renewal office in Ypsilanti the moment a radio broadcast in a backroom heralded the news that President John F. Kennedy has been shot, he remembers.

The building that had housed his family’s business since 1947 was demolished, one of at least 128 other structures flattened by bulldozers within the project boundaries, by Azus’ count.

The historian also found the promised renewal slow to arrive. Just two model homes had been built by 1965, with only a handful more by 1970. It took nonprofit faith and neighborhood groups to erect some of the present-day apartment complexes in the area, like the Parkview Apartments (now Hamilton Crossing).

The last cleared 10-acre parcel between Hamilton and Huron streets wasn’t developed until 1997. As proposals for the land were being considered, The Ann Arbor News ran a series looking back on the destruction under the headline “Bulldozers flattened a close community. ”

Meanwhile by the late 1960s, an estimated 191 families had been forced out by the project, according to figures compiled by the University of Richmond.

Of that number, 99% were families of color.

In 1963, she and her husband were arrested for smearing tar on project signs, an act of protest she told The Ann Arbor News then would persist “as long as they continue to put them up.”

Dorsey and the Ypsilanti Property Owners Association launched a barrage of lawsuits at the city too, some successful. After she was elected to the City Council in 1975 she found herself on both sides of one legal battle over the urban renewal project, according to Azus.

“We have been eight years trying to overcome the program that has been thrust upon us. We weren’t tired in 1961, and we’re not tired now. You can’t continue to treat people like cattle,” Dorsey said at a public meeting in June 1969. 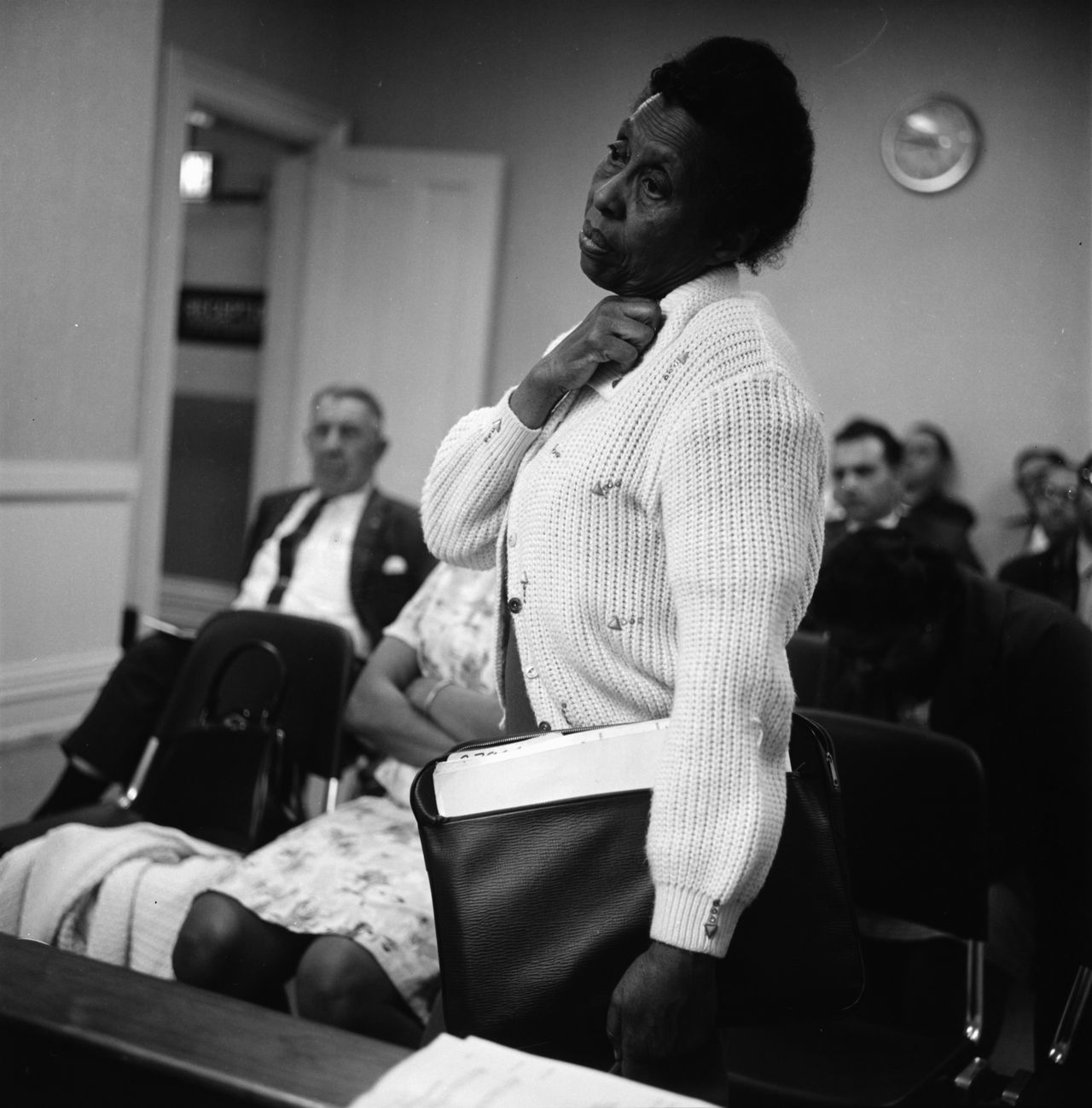 The community activist fought other battles as well.

In 1964, she blasted the Ypsilanti Jaycees for using the “Aunt Jemima” advertising symbol for a pancake fundraising breakfast, saying it represented a return to “the black-face minstrel days,” according to a news article from the time.

Fifty-six years later, in 2020, the pancake and syrup brand said it would drop the name and logo, acknowledging its roots in racial stereotypes.

Today’s leaders aspire to take up mantle of a ‘fighter’

Dorsey died in 1990 at age 90, with her obituary proclaiming she was a “fighter.” That mantle is something today’s community leaders say they’re honored to pick up.

Desirae Simmons, a Ypsilanti community activist and advocate, says she learned from Dorsey’s story after mounting opposition to the controversial International Village development proposed for city property on Water Street in 2017.

“We recognized that we needed to look back to pull strength from our shared ancestors in order to face the challenges of today that look different and look the same,” Simmons said.

The failed Water Street development proposal gave birth to the movement behind rules Simmons and other organizers fought for in 2018 requiring more resident input into publicly supported development and mandating “community benefits” from projects. That process is playing out for the first time this year.

The struggle for affordable housing and against displacement continues, as more residents are priced out of the urban core, Simmons said.

Morgan Foreman, who is this year launching a campaign for a seat on the Washtenaw County Board of Commissioners, said she grew up hearing stories of “Sister Dorsey” at Ypsilanti’s Second Baptist Church, where the community leader was a member.

The issues of gentrification and access to housing, health care and transportation that motivated Dorsey also push Foreman’s political passions, she said.

Still, she feels like “a baton was tossed when (Dorsey) passed,” she said. “I’m proud to stand on her shoulders and I’m proud to know of this legacy.”

More from The Ann Arbor News:

Major Ypsilanti road, bridge upgrades in the pipeline. Here are the projects to watch