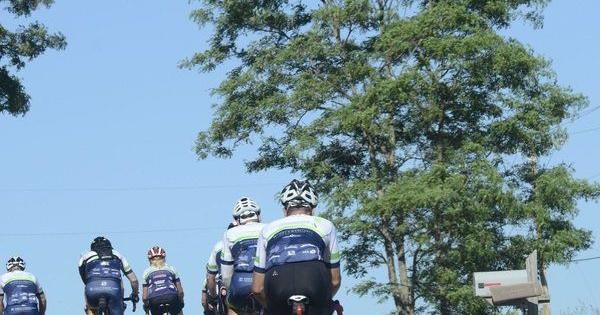 TRAVERSE CITY — What began as a two-day, nearly 300-mile ride from Flint to Traverse City that only the most ardent cyclists attempted has blossomed into a nationwide monthlong event with Traverse City as the epicenter.

The Less Cancer Bike Ride America, formerly known as “Split the Mitt,” has undergone some necessary changes in the wake of the COVID-19 pandemic to continue its mission of cancer prevention and to honor cancer survivors. The inability to meet in person forced the cancellation of the 2020 event and had the 2021 two-day bike ride morph into dozens of separate bike rides all across the country.

Now, as COVID-19 has left the pandemic stage and the United States slowly snaps back toward a changed sense of normalcy, less cancer and Mt. Holiday have partnered up to kick off the 2022 30-day bike ride with a free concert and party on Friday, June 3.

“It’s a way to connect people when we’ve all felt disconnected for the last three years,” said Less Cancer’s Bill Couzens, who founded the organization in 2004. “The idea of ​​this, of the whole bike ride, is connecting communities. Now, we are connecting communities across America and doing it from Traverse City.”

Couzens said hopes the concert, featuring the Steel Wheels, as well as the food and beverages available will be an opportunity to reconnect.

“Rain or shine, it’s going to be a party,” Couzens said of the event, which starts at 6 pm with the Steel Wheels going on stage at 7:30.

Trent Wagler, the lead vocalist for the Steel Wheels, has been involved with Less Cancer for years. He’s also an avid cyclist.

During a previous Less Cancer ride when it was still the 280-mile “Split the Mitt,” Wagler and some of his bandmates played a show, pedaled 140 miles and then played another show.

Working with Less Cancer for such a good cause has been the driving force for Wagler and the Steel Wheels to come back to Traverse City.

“The notion of thinking about the disease and its root causes and trying to come up with a way to prevent it just really speaks to me,” Wagler said. “Being a part of that positivity and working toward a prevention for cancer, but there is also going to be a lot of great music and it’s going to be a lot of fun.”

Less Cancer works to educate lawmakers, medical professionals and the public about how to prevent cancer in the hopes of changing public policy on both the state and federal levels. Despite the organization’s national influence, Less Cancer operates on just a $200,000 annual budget. Much of that comes from the Less Cancer Bike Ride.

This year’s ride is spread over 30 days, beginning June 3. Couzens is encouraging people to “get on their bikes, build team community with friends and family, and design their own bike ride.” Registration is only $25, and cyclists can make their rides look like whatever they wish, Couzens said.

Cody Sovis, the race director of the Iceman Cometh Challenge bicycle race, said Less Cancer is a cause the cycling community has embraced for the better part of a decade. Sovis said the original race that finished at the Cowell Family Cancer Center in Traverse City and ended with a celebration of cancer survivors was incredible but “not really accessible to a lot of people” because of the back-to-back days of riding 140 miles .

This year’s ride can be anything to anyone during those 30 days.

“Whether that’s 10 miles just to get the feeling outside or getting a huge ride together,” Sovis said. “Just making it their own and making it work for people of all abilities. This is an opportunity to either stay committed to their healthy lifestyle and keep moving, but it’s also an invitation for new people to give it a shot.”

Tom Petzold has been involved with Less Cancer for nearly 10 years, doing his first bike ride in 2013. He said that race was the “best managed and most supported” ride he’d ever been associated with. That’s what keeps him coming back.

“Given this cause that you’re riding for, it helped bond us cyclists together,” Petzold said. “Traverse City has this amazing community of outdoorsy people who are filled with energy and enthusiasm and endurance.”

Kathy Laraia is the executive director for Oncology Services for Munson Healthcare. She works with the Cowell Family Cancer Center and began working with Couzens and Less Cancer about five years ago. The focus on preventing cancer was the reason they connected.

Laraia said the June 3 event will include a giveaway bag that has a free skin cancer screening coupon to an area dermatologist, sunscreen and handouts on what to look for and how to prevent skin cancer as they enter the summer months.

“We don’t want to just be the facility that treats cancer. We want to be able to provide prevention resources and screening opportunities so we can eventually eradicate the risk of cancer that develops because of lifestyle choices,” Laraia said.

Kelli Mengebier, a consultant and managing partner of HKM & Associate, said the effort is “near and dear” to her because her mother died from breast cancer at 44 years old. She knows she has the same genetic risk as her mother and has worked diligently to prevent breast cancer from taking her life.

The concert at Mt. Holiday, Mengebier said, is a great way to “bring the community together to rally around two incredible nonprofit causes that have built each other up.”

“There’s so much talk and excitement around it,” Mengebier said. “We could get a lot of people.”

Mengebier has started a cycling team that anyone can join, the Mt. Holiday Community team.

“This is the tsunami to start off the whole month of bike riding,” she said.