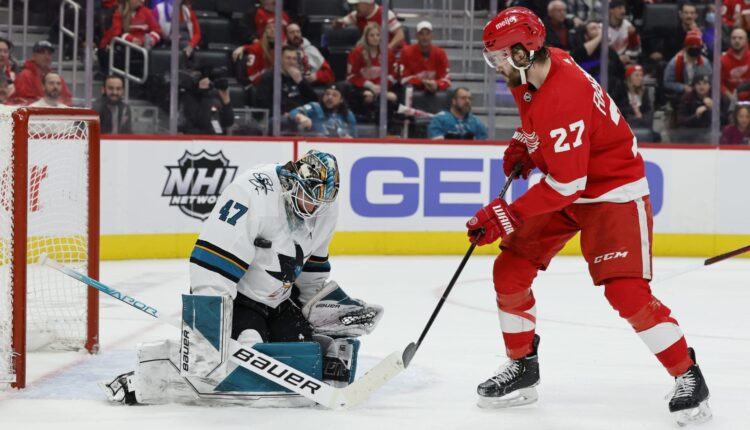 The Detroit Red Wings might have finally done it. The search for a role for Michael Rasmussen has been ongoing for quite some time. But it seems like the end of the 2022 season might have finally brought it out and allowed the team to figure out how to use the big forward.

As the Detroit Red Wings continue to build towards a time of competition, finding a use for Rasmussen will be beneficial. The Red Wings put some trust in Rasmussen, who is under contract through the 2023-24 season with a $1.46 million cap hit.

At that point, he is arbitration-eligible and will be a restricted free agent who the Red Wings can keep around. That being said, it leads me to believe that Yzerman envisions keeping the former first-round selection around, hoping that he can figure it out.

Rasmussen has not been able to really settle in and be the player the Red Wings have been expecting him to be. The time away during the pandemic allowed him to get some strength and fine-tune his game. This helped him get to the NHL level, but the skills have not fully transferred.

Watching the Battle of Alberta series, it’s easy to see what kind of benefit Zach Hyman brings to a team like the Edmonton Oilers. Even before his time in Edmonton, while with the Toronto Maple Leafs, he was a solid addition to the offense.

While Hyman often played on the top lines and along with superstars, Rasmussen is not in the same tier. But his niche is going to be performing similarly to Hyman. Rasmussen is a big-bodied forward who has shown that he can be a problem for the opposition in the net-front role.

If Rasmussen can be that for the Red Wings, they should be more than happy with the product. Rasmussen’s niche is going to be going to the front of the net, causing trouble, cleaning up rebounds, and creating offense or at least scoring chances in that regard.

In 2021-22, Rasmussen was put into a variety of roles, and by the end of the year, he got into this net-front role, and he had success. Over 80 games, Rasmussen collected 15 goals and 12 assists for 27 total points on the season for the Red Wings.

It was a nice bump from his recent season’s performance, there’s room to get even better, but this niche role should allow for that. If Rasmussen can be that worrisome net-front forward, the Red Wings will be more than happy with his performance.