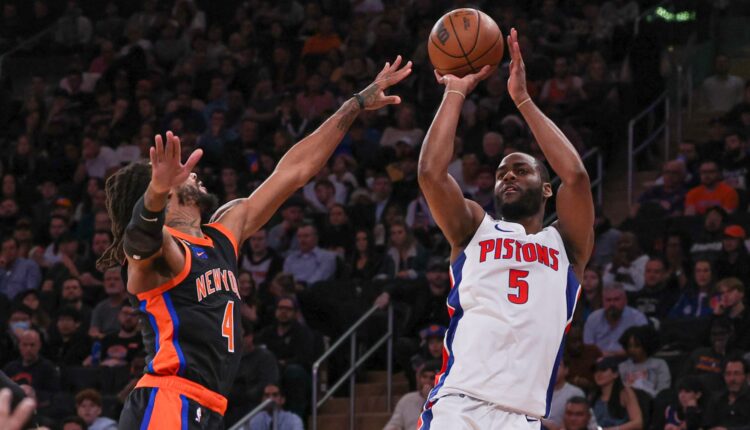 Is Alec Burks trade bait or a long-term piece?

The Detroit Pistons have started the season 4-15 but there have been some positive signs of late even though they are still missing Cade Cunningham, Saddiq Bey and Isaiah Stewart.

The bench has been much better over the last four games, mostly because of the return of Alec Burks, who quickly showed why the Pistons were eager to acquire him as part of an offseason trade.

Burks is shooting nearly 40 percent from 3-point range and gives Detroit a veteran scorer off the bench that they otherwise lack. But his play has of course attracted the attention of other teams, who might want to bolster their own depth at the expense of one of the league’s worst teams.

Many feel veterans Alec Burks and Nerlens Noel will not finish the season in Detroit and even the recently-extended Bojan Bogdanovic has been mentioned in early trade rumors.

It seemed a foregone conclusion that Burks and Noel would be traded at some point, but the way Burks is playing, the Detroit Pistons may view him as a long-term piece. I get the arguments for trading him this season, but there is also a case for keeping him around.

Detroit Pistons: Is Alec Burks trade bait or a keeper?

Burks is a consistently good 3-point shooter who can get you 16-20 points a night off the bench, so he has value on the market, especially for contending teams. His value is not likely to be much higher than it is now, especially considering his contract only has a team option left on it after this year at a reasonable price.

The Pistons are not going anywhere anyway, so may as well cash out while the value is high, which would be a big net win for them considering they gave up practically nothing to acquire him.

Burks could fetch a late first-round pick or a young player, either of which could be ammunition for future trades if the Pistons want to try and add a star next offseason.

Detroit would have a chance to buy low and sell high on Alec Burks, which is smart business.

At some point you actually have to keep some of these veteran players around if you want to win. This rebuild has been going on long enough, and after this season, this team will be expected to start to turn the corner and compete.

Burks is only 31-years-old, so it’s not like he’s ancient, and he fills two needs for the Detroit Pistons as a knock-down 3-point shooter and a veteran presence off the bench, two things they lack otherwise.

His play has clearly boosted the bench, which has been trending up since his return and has outscored the opponents’ second unit in four straight games.

If the Pistons are really going to try and compete next season, they will need players like Burks, who makes an impact, isn’t getting paid a ton and doesn’t always need the ball in his hands to thrive.

He can be inserted into any number of lineup configurations and is the type of depth good teams have on their bench. If the Pistons were to try to add a big free agent or make a trade this offseason, they will need complementary players like Burks rather than running out rookies and second-year guys off their bench.

Also, his value isn’t likely to go down much over the next few seasons, so like Bogdanovic, it may behoove the Pistons to sign Burks to an extension, which could give him even more value as a trade piece, especially if he stays on a similar team-friendly deal.

His value to this team is likely far higher than a late first-round pick would be, and at some point you have to stop selling your fans hope and actually try to win basketball games.

Burks on a two-year extension would allow the Pistons to have the tail end of his prime and still potentially trade him in a future deal if things still aren’t working out. You can make an argument either way, but those of us who would like to see Detroit win sometime again in our lifetimes are probably leaning towards keeping Burks around unless Troy Weaver finds a deal that is too good to pass up.