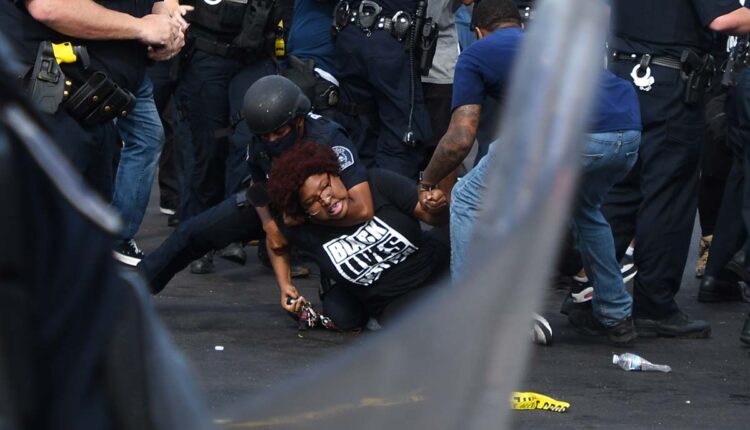 Incidents of use of force by Detroit police continue to climb

For the second year in a row, Detroit is seeing a high number of incidents in which citizens are injured, tased or manhandled by police. The City’s police board, tasked with overseeing the department, says it is troubled by the data.

The Detroit Police Department released its 2021 use-of-force statistics at last week’s Board of Police Commissioners meeting. In 2021, there were 1,068 incidents involving Detroit police officers using force on civilians, a slight decrease from the 1,087 such incidents the year before.

Citizen complaints go through the Office of the Chief Investigator, or Detroit police officers self-report when they discharge a weapon or cause an injury that sends someone to the hospital.

Category 1, which includes the most serious cases, such as broken bones or death, increased by 24% from 2020. The Detroit News reported that Category 1 numbers jumped by 41% from 2019 to 2020 after a year that saw more than 100 days of protests against police brutality in Detroit.

Every tier of force except the second — which includes any incident resulting in injury or complaint of harm not included in Category 1 — saw an increase from 2020 to 2021.

Category 4, which includes being forcibly handcuffed, among other uses of force, saw the largest increase, of 75%. The escalating numbers include a change in how police categorize incidents of violence. Forcible handcuffing was added as a Category 4 situation last year, possibly contributing to the sizable increase.

Last year, the total number of arrests declined by about 1,100 arrests, or by about 5% in Detroit.

Overall use of force numbers went up 23% during 2020 — at a time when there was national scrutiny on the way Black communities are policed in the United States. Then-Police Chief James Craig said on Fox News that police dealt with aggression from demonstrators during the 2020 protests.

The Rev. Jim Holley, chairman of the Board of Police Commissioners, said the department should be concerned with the number of incidents in which force is used.

“Just looking at these categories, if the number is over 10, that should concern you,” Holley said during the meeting, “that shouldn’t just concern me.”

Holley said he’s glad that Detroit police officers haven’t had any incidents on par with the issues going on in cities around the country regarding police killing unarmed Black and Brown people, but he said he wants to make sure it stays that way.

“Me and the rest of the board want to make sure we’re monitoring use-of-force numbers because we want the department and the officers to know we’re watching them, praying for them and making sure we don’t have any brutality like other places,” he said.

DeShaune Sims, deputy chief of Western Operations at DPD, said she is “absolutely” disturbed with the rise in use of force.

Julie Hurwitz, vice president of the National Lawyers Guild (NLG), said the numbers are “strong and troubling indicators” that the department doesn’t adequately hold officers accountable when they use unnecessary force.

“As long as that continues, these numbers are going to keep going up,” Hurwitz said.

Hurwitz believes one problem with holding officers accountable is that the department is too heavily involved in the disciplinary process for officers who receive multiple citizen complaints.

Citizens can file complaints against DPD through the various department precincts or the Office of the Chief Investigator (OCI). Those complaints are then reviewed by OCI, and, if the complaint alleges criminal conduct, it will automatically be sent to the department’s Internal Affairs office.

Once the OCI  reviews the complaint, it makes a recommendation to the Board of Police Commissioners and the police chief or their designee within the department. Then the findings of the investigation result in the complaint either being ruled sustained, not sustained, exonerated or unfounded. If the complaint is sustained, the officer or officers involved may be suspended or fired, if the chief believes the misconduct warrants it.

Another problem, Hurwitz said, is that the Board of Police Commissioners doesn’t have enough power to independently discipline officers.

The Police Department, on the other hand, has the power to choose what discipline, if any, an officer will receive for abusing their authority or using excessive force.

Dietrich Lever, captain of DPD’s risk management division, didn’t give commissioners or the public the number of reported fatalities, instead telling  commissioners that they would receive the information in writing. Lever said officers are trained to use the least amount of force necessary to make an arrest.

“I’ve never been to a roll call where I’ve seen a supervisor or leader or commander encourage using force or say, ‘Go out and use force today,’” Lever said.

Melanie White, the interim secretary for the Board of Police Commissioners, pointed out during the meeting that the board approved multiple reforms to the Police Department’s use-of-force policy in August 2020, following the national and local protests against police brutality.

The Detroit Police Department presented their 2021 use-of-force data at Thursday’s Board of Police Commissioners meeting. There was a decrease in incidents in which officers used force overall, but there was a 24% increase in the most flagrant category, which includes serious injuries and deaths. (City of Detroit screenshot)

Shortly after the police board made these reforms, a federal judge banned police from using excessive-force tactics like chokeholds, rubber bullets, batons, shields and sound cannons on people after such tactics were used on a group of peaceful protestors. All instances of force are investigated by the department.

Commissioners Linda Bernard and Willie Burton, who represent the city’s second and fifth districts, respectively, both asked to see police footage of use-of-force incidents that took place during protests in the summer of 2020.

Burton has asked to see footage of Nakia Wallace, the Detroit Will Breathe organizer and co-founder, being placed in a now-illegal chokehold by an officer during a protest following the shooting of Hakim Littleton.

“I’ve asked to see this video multiple times, and still haven’t been given any idea of when that footage will be available,” Burton said.

There is video that surfaced online after the incident, but Burton believes the public deserves to have the footage from the officer’s body cam explained by a police official in the same way the department analyzed footage of Littleton aiming and firing a gun at officers hours after the shooting occured.

Bernard said the displays of excessive force during the “Defund the Police” protests made her worry about the culture within the department.

“We have yet to receive a report on what has been labeled in federal court as the abuse of protesters by DPD,” Bernard said. “We’ve requested it several times.”

But Bernard said she doesn’t think Detroit police officers are using an excessive amount of force in most situations.

“It seems like more often than not, our officers are only using force when they have to,” she said. “Those protests were not common to how the officers act on a daily basis.”

Bernard also disagrees with the idea that BOPC doesn’t have the ability to hold the department accountable. She said if DPD’s use-of-force statistics ever got to be a problem, the Board of Police Commissioners (BOPC) could handle it.

“BOPC could definitely change that by putting pressure on the chief and the assistant chiefs to do something drastic to address the problem,” she said.

authored by
First published at https%3A%2F%2Fwww.bridgedetroit.com%2Fincidents-of-use-of-force-by-detroit-police-continue-to-climb%2F