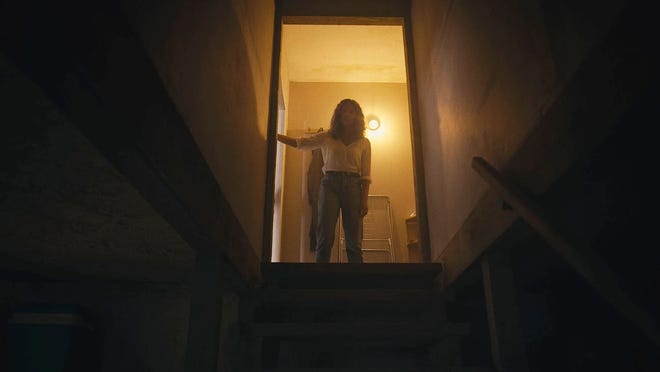 In ‘Barbarian,’ a Detroit Airbnb is a house of horrors

A Detroit Airbnb is revealed to be a true house of horrors in “Barbarian,” a twisty, campy and at times genuinely terrifying fright fest that is eventually undone by its own misdirections.

Writer-director Zach Cregger is like the landlord of a funhouse in the way he gleefully toys with audience members, their expectations, their knowledge and their fears. There’s real craft in the way he goes to viewers, gets them to look this way when he wants them to look that way, and eventually pulls the rug out from underneath their feet. But he goes a step or two (or six) too far in his pranksterism, undercutting himself and what he’s built through his lack of narrative discipline.

Georgina Campbell as Tess Marshall, who arrives one night at a rental property in Detroit’s Brightmoor neighborhood — the blight of the city is used as a backdrop as effectively as it was in 2016’s “Don’t Breathe” — only to find it’s already occupied by a man, Keith Toshko (Bill Skarsgård, Pennywise in the “It” movies, minus the demonic clown makeup). Keith is apologetic and kind to Tess, but whether he’s sincere or sinister is unclear; the more he leans one way, the question of his intentionality heightens.

Cregger, a former member of “The Whitest Kids U’ Know” comedy troupe and a co-director of the randy 2009 comedy “Miss March,” leans in on Tess’ suspicions as well as Keith’s overbearing need to prove this is all some scheduling mistake, not of his doing. (As for why Tess just can’t go get a hotel room, there’s “some huge medical thing” in town, and all the rooms downtown are booked out.)

Tess eventually warms to Keith, although he’s never quite out of the woods in terms of his character, as the sexual politics of both the moment and history hang over him. Can he really just be a good guy, and can this really all be some sort of accident? Cregger moves carefully, each movement carefully constructed, as he builds a Hitchcock-like suspense from the situation.

And then there’s the small matter of what’s in the basement.

The exploration of downstairs is just one of the major zags in “Barbarian,” another coming when we smash cut to Justin Long driving down the Pacific Coast Highway. He plays AJ Gilbride, a Hollywood-type whose world comes crashing down around him over the course of one very bad phone call.

AJ is embroiled in a #MeToo scandal — a timely but thorny and messy way to render his character an unlikeable jerkwad — and he suddenly finds himself in a cash crunch, and he’s forced to visit his rental property back home, which just so happens to be a certain Detroit Airbnb. (Some “Barbarian” exteriors were shot in the city, although the movie was mainly filmed in Bulgaria.)

A third connected storyline winds things back decades earlier and introduces Frank (Richard Brake), the house’s previous owner, and the origin of the evils into which Cregger deliriously plunges viewers.

Yet huge questions about what’s going on remain, and as much fun as audiences might have uncovering its mysteries, “Barbarian” has a handful of major disconnects. Chief among them is its interjection of racial and sexual themes which attempt to lend it a topicality it doesn’t need or earn, and wind up distracting from the mindless roller coaster ride Cregger otherwise constructed.

The social horror of Jordan Peele is felt as an influence — Peele is thanked in the film’s credits — but “Barbarian’s” thrills are more of the throwaway B-movie variety than those of “Get Out” or “Us,” and its attempts to elevate itself have the opposite effect and knock it down a notch. “Barbarian” is a movie that doesn’t need to be any more than it is. Let the house do the haunting and leave everything else at the front door.

Rated R: for some strong violence and gore, disturbing material, language throughout and nudity