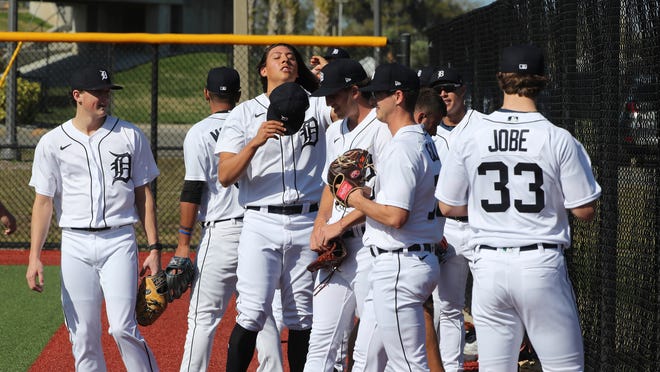 Here are the freebies at Comerica Park

While we still don’t know exactly when the 2022 Detroit Tigers’ season will start — the planned March 31 opener in Seattle seems unlikely with no CBA in place between the MLB owners and the players association — we do know what the Tigers will offer fans once the season does begin.

The team announced its promotional schedule for the season this week, with individual game tickets set to go on sale Friday. Fair warning, however: it’s likely an incomplete list, as teams aren’t allowed to use players’ names or likenesses (though we’re pretty sure the Tigers got around that on one key item, which we’ll get to in a bit ). Here’s a look at the major giveaways announced for the season to come.

STRANGEST SPRING EVER:The pieces are in Lakeland. They’re just … off

WIN, LOSE OR DREW:Carlton getting a second chance at MLB

This one is set for the Tigers’ home opener, scheduled for 1:10 pm on a Friday, after the Tigers take on the Mariners for four games and the Athletics for three games on the West Coast. It’s also probably going to be delayed, as well as partially inaccurate, if the season doesn’t open on March 31. But it the game happens, it’ll be a good test of the Tigers’ updated lineup, after the team went 7 -12 against the American League Central champs in 2021.

May 13: “Pink Out The Park” light hoodie

The Tigers are scheduled to be on the road (against Houston) for Mother’s Day on May 8, so their annual tribute to the fight against breast cancer, and the requisite giveaway of pink team gear, has to wait until the following Friday when the Baltimore Orioles come to town. (The Orioles feature their own stirring cancer story, as slugger Trey Mancini missed all of the 2020 season with colon cancer, then hit 21 homers in 147 games in 2021.)

The first visit by the newly rebranded Cleveland Guardians — no more Chief Wahoo on the hats or the jerseys — comes with a floppy-brimmed hat decked out in a digital camouflage pattern and the Old English D, perfect for hiding from the sun with a 4 :10pm Saturday start time. It’s also a reminder that even a change of hats can’t hide the Tigers’ 7-12 record against the AL Central’s second-place finisher.

Hmmm… who could this be referencing? Robbie Grossman’s 20-homer, 20-steal season in 2021? Tarik Skubal’s franchise rookie record of 164 strikeouts? No. 1 overall pick Spencer Torkelson’s first at-bat? Just kidding. We’re pretty sure it’ll be some sort of tribute (available to the first 10,000 fans) to Miguel Cabrera, who enters the 2022 season just 13 hits from becoming the 33rd player in MLB history with 3,000 hits. When he gets no. 3,000, he’ll be the seventh with that total and at least 500 homers, which Cabrera reached last August in Toronto. And who’s in town for this Friday night game? Yep, the Blue Jays.

The Tigers’ replacement for the winter TigerFest hits year two , and brings its own merchandise this year (for the first 10,000 fans). Expect plenty of past and present Tigers in the concourses signing autographs for fans before the game, with a 4:10 pm start against the Jays.

[It’s the end of an era for Tigers pitchers: No more batting in NL parks ]

After the COVID-19 pandemic kept the Tigers from wearing throwback Detroit Stars uniforms to honor the city’s Negro League franchise last season, the annual event is back, with a visit from the Texas Rangers on the day before Juneteenth (which honors the enforcement of the Emancipation Proclamation in Galveston, Texas, in 1865, and became a federal holiday last year).

July 1: “Patriotic Print All Over” shirt

The Tigers will celebrate America’s independence from the royals of England with a visit from the Royals of Kansas City — and this short-sleeved button-down shirt festooned with all the things that make America great: baseballs, stars (representing fireworks, we guess) , beer and team-sponsored marketing campaigns. The Fourth of July weekend should also be the Royals’ first visit to Detroit this year, and the first chance for fans at Comerica Park to see a showdown between potential Rookie of the Year candidates on both sides, with KC likely to have shortstop Bobby Witt Jr. in the lineup facing the Tigers’ Torkelson and Riley Greene.

Finally, a player the Tigers can mention by name! Just 27 years after “Sweet Lou” took his final swing in 1995, the Tigers are getting around to retiring his No. 1 jersey (last worn by Josh Harrison in 2019), as the Tampa Bay Rays come to town. (The Rays came into existence three years after Whitaker’s retirement.) It’s also just a little less than four years after the team retired the No. 3 of his double-play partner, Alan Trammell, a month after he was inducted into the Baseball Hall of Fame. Here’s hoping the hoopla for Whitaker inspires the “Modern Baseball” veterans committee to pick him for the Hall when it next meets in December 2023.

As the Angels of Los Angeles — “The Angels Angels” when fully translated from Spanish — visit, the Tigers will hand out a teal ballcap featuring the team’s “Tigres” script from its faux throwback uniforms to the first 10,000 fans (21 and older) . We’re assuming the team will wear said uniforms again, which reference the 1960 squad’s home jersey missing the Old English D.) Why teal? Perhaps they were inspired by the Pistons’ recent acknowledgment of the color that briefly took over the 1990s? Or maybe it just looks cool.

The season wraps up — we think, but it could depend on when the season actually starts — with a visit from the Minnesota Twins, the annual “Fan Appreciation Weekend” and the yearly handing-out of the sturdy tote branded with the MLB Network’s logo . Seems like it could be handy for carrying out any souvenirs picked up at the next-to-last game of the season, set for 6:10 pm on a Saturday — or for carrying cold-weather gear into the playoff games the Tigers are hoping to host thanks to an almost certainly expanded MLB postseason.