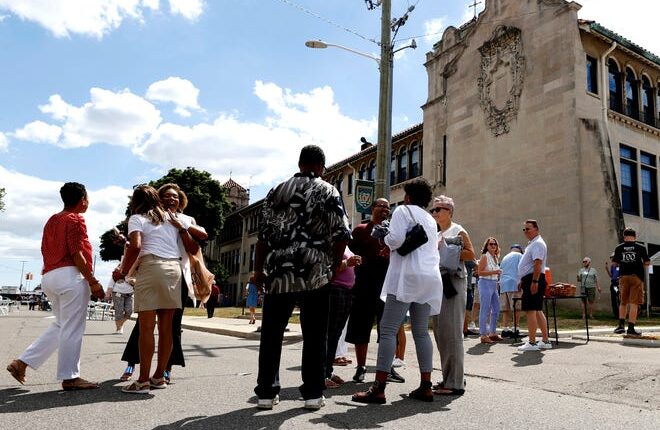 A quiet corner of Detroit’s University District neighborhood transformed into a Saturday afternoon block party, connecting people of all ages in community and nostalgia.

The Rev. John McNichols of the Society of Jesus founded the Gesu Church in 1922. That March, the chapel, then a converted farmhouse on the corner of Livernois and Grove Streets, hosted its inaugural Mass. Three years later, the Gesu School was founded.

Construction on the current Gesu Church building began in 1934 and parishioners gathered for its first Mass in 1935.

For some former Gesu School pupils, being back in their old elementary school was exciting. Keith Thompson, who graduated from the school in 1968, happily pointed out the various classrooms where he studied. His second grade classroom, now room 205, was near where current second grade teacher Sarah Purifoy, 25, stood welcoming guests.

“It’s amazing what hasn’t changed,” Thompson said, pointing to the shiny school floors. However, he noted, the school did seem bigger when he was in second grade.

In front of the school, artifacts like “Fashion” desks, which were student desks used through the mid-1960s, complete with inkwells, hailed as a reminder of the institution’s long history.

A placard above the historic desks called on alumni to document their memories: “Take a photo of yourself in these desks!”

Karen Rease, who graduated from the Gesu school in 1977, served as the centennial celebration’s chairwoman, responsible for the past two years of planning. Rease’s children attended the school and her roots in the community run deep.

“I’ve never left,” she said. “I’ve been a parishioner for over 50 years. It’s a wonderful community.”

Rease estimated that nearly 1,000 people pre-registered for the event, but more were registering in person, forming a line that wrapped around the registration tent.

The church’s new pastor, the Rev. Lorn Snow, who assumed his duties less than a month before the celebration, stood in front of the registration tent greeting parishioners and community members. Though he’s new to the job, Snow isn’t new to Gesu. Before he was ordained as a priest, Snow made his vows in the church he now ministers to.

“I’ve been all over the country with the Jesuits, serving in different parishes and schools,” Snow said, “but I feel like I’m coming home. And I think that’s the best description of Gesu Parish.”