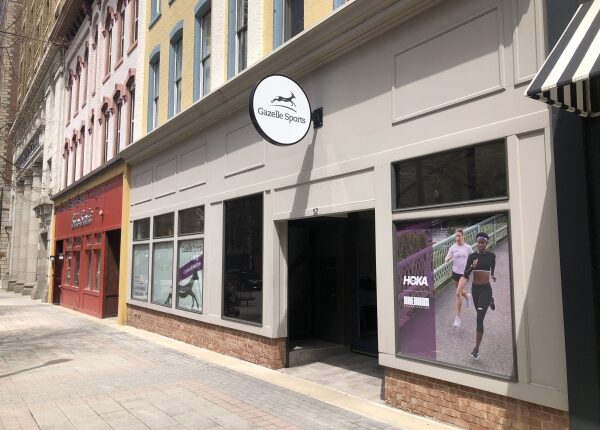 GRAND RAPIDS — When Richard App started his role as retail retention and attraction specialist at the Grand Rapids Area Chamber of Commerce in January 2020, Gazelle Sports was on his list of retailers he hoped to bring downtown.

The running and active lifestyle specialty store has since opened its sixth retail location at 52 Monroe Center St. NW, the former location of a bridal store.

“(Gazelle Sports) is an industry leader and trusted in their field,” App said. “What I would hope this shows to other retailers is if a company like Gazelle trusts coming to downtown Grand Rapids, this bolsters attracting others to open here.”

Gazelle Sports hosted a soft opening on April 30 so the store could serve as an expo for the She Runs races on May 1 throughout downtown Grand Rapids. A grand opening for the 3,600-square-foot storefront is scheduled for May 6.

“We were asked to come to the table and have a conversation through efforts with Richard App and Downtown Grand Rapids Inc.,” Gazelle Sports CEO Jen Brummitt told MiBiz. “We were really able to put a package together to take out some of the risk. We are one of the slightly bigger retailers coming to downtown Grand Rapids, so it certainly is different from other markets we’re in. We’re excited to be part of what retail could look like in downtown Grand Rapids.”

Gazelle has a discounted three-year lease on its downtown storefront with Rockford Construction Co. Inc. As well, the Grand Rapids Downtown Development Authority awarded Gazelle a $67,000 grant to lure the retailer downtown.

Founded in 1985 in Kalamazoo, Gazelle has additional stores in Holland, Northville and Birmingham as well as at 3930 28th St. SE in Kentwood.

“As a community partner, we love engaging with other businesses in fun ways,” Brummitt said. “We’re excited to work with more retailers downtown together and align on things like the hours we’re open. We’re excited to be part of what retail could look like downtown.”

Neighboring business owners Kayla and Alex Benda — who own Oh Hello Paper and Gifts other Courage and Soar — were glad to see an established retailer like Gazelle open next door to their downtown retail stores.

“(Gazelle) investing in downtown shows other large companies that there is value downtown,” Alex Benda said. “They’ll also be hosting races and events, so it will bring together the community and a different crowd that maybe hasn’t been here before. We have created a really great sense of community here, and with Gazelle I think we’re going to see them be more of that for people downtown.”

“Normally we see a lot of boutiques and dress shops, so to have Gazelle is a great addition,” Ansara said. “I totally believe they could be a catalyst for other retailers.”

Several other businesses also have recently opened or are in the process of opening downtown, including Monsoon Vietnamese Cuisine, Courage and Soar, The Aroma Labs and Periwinkle Fog.

“In a time when companies like Gazelle aren’t necessarily expanding, they have made an investment in our downtown because they want to be a part of what we’re doing,” App said.

The pandemic accelerated the already rising trend of people turning to the internet for their shopping, but Brummitt still believes in the value of shopping in person.

“Having that ability to build a connection in a brick and mortar experience and give back to that neighborhood is really important,” Brummitt said. “After the last two years, some people have shifted more of their shopping online, but I think we are all craving human connection and interaction, and that’s our point of differentiation. Our staff is the thing that makes the biggest difference for us, they are knowledgeable, kind and a trusted running friend.”

Most employees for the downtown store will come from Gazelle’s Kentwood location as six team members wanted to work downtown, Brummitt said. They are looking to hire more people to accommodate the new location. The 28th Street location will have a few more vendors and wider selection of products than downtown, which will be more running and walking focused, Brummitt said.

“We are honored to be able to be part of the downtown community,” Brummitt said. “We’re looking forward to getting to know our neighbors.”

Never miss MiBiz’s biggest stories and breaking news. Sign up to get our reporting sent straight to your inbox every weekday morning.