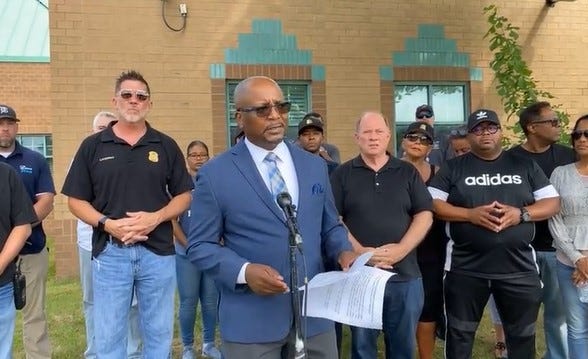 Detroit — Four people were shot, three fatally, in a series of what appear to be random shootings Sunday morning along Seven Mile on Detroit’s west side, police said.

An extensive manhunt was underway Sunday afternoon for the suspect, led by the Detroit Police Department with Michigan State Police, ATF, FBI and US Homeland Security. Helicopters searched near Seven Mile Road and Woodward Avenue around 2 pm Sunday as the dozens from law enforcement fanned out across the west side.

Detroit Police Chief James White said at a news conference the shootings were done by a single suspect and appeared to be random because nothing connected the four victims.

White said the suspect is a man in his late 20s to early 30s and about 5-foot-8 inches tall. Police issued a news release with his photo. Police do not believe the suspect has a vehicle or transportation and that the crimes were committed on foot.

Detroit Mayor Mike Duggan urged anyone with information about the shootings to contact police.

“The suspect already shot four people. Please call immediately. … Someone out there knows who this is. No one in this department wants a violent confrontation with this individually,” Duggan said.

Duggan said a mental health specialist is on hand if needed when the suspect is captured or surrenders.

“This is a case where someone from the public calling will bring this to an end,” Duggan said.

Police warned the public to remain indoors and to call 911 if they see the suspect. None of the victims were robbed, White said.

White said the first victim, a 40-year-old woman, was found with multiple gunshot wounds at Wyoming and Margareta at about 4:45 am Police later learned she had died. No further details were available.

While police were at the scene, a person approached them and told them another victim was nearby, and the body of a 28-year-old man was found with gunshot wounds at Seven Mile and Wyoming.

At about 6:50 am the body of a 40-year-old female was found on the 19700 block of Livernois, White said. The woman had been waiting for a bus, the police said.

Another man was shot on Pennington north of Seven Mile at about 7:10 am and was in serious condition, he said. The man had seen the suspect looking into vehicles and told him to get away when the suspect shot him, White said.

Megan Owens, who lives on Pennington, said she heard about a dozen shots.