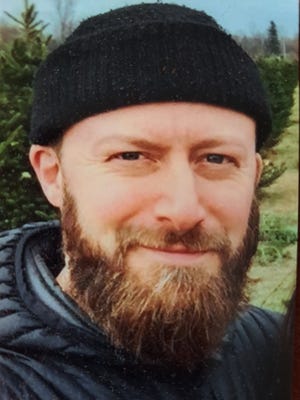 Blakslee, 44, was with friends celebrating his impending birthday at the Sandy Point Beach House restaurant’s outdoor bar when he was struck by a steel door blown by a gust of wind during a storm, said his father Jerry Blakslee.

Tyler Blakslee was trapped between the door and the bar, he said, crushing him and breaking ribs, one of which punctured his heart.

His sudden death has been a shock, Jerry Blakslee said, but it doesn’t erase the rich, multifaceted life he led or the color he brought to other people’s lives.

“He was a son, he was a brother, he was an uncle, a friend, a teacher, a mentor, a writer, a scholar, a musician, an outdoorsman and a bartender,” he said. “He was all of those things and more.”

He taught English and diploma program level film studies at Eastern for 15 years, according to a statement from the Lansing School District, leaving the job in 2020.

District officials described him as “a phenomenal educator.”

“Mr. Blakslee’s sense of humor, style, and energy impacted all who had the pleasure of knowing him,” the district’s statement read. “He will be truly missed.”

Former students say Blakslee stood apart from other educators because of his passion for the subjects he taught and for the kids in his classroom. They recall a vibrant teacher who wore vintage rock band T-shirts, played in a local band and decorated his room with horror movie posters.

Jose Gallo, 26, credits Blakslee with helping him discover a love for books.

Gallo was in his classroom in 2013 and described him as “fun, very creative, always willing to really share and pourout his knowledge about things he had a passion for.”

But Blakslee made reading William Golding’s “Lord of the Flies,” and “The Elephant Vanishes,” by Haruki Murakami memorable, he said.

“He really brought a different perspective of how to read a book and how to analyze a book and stuff like that,” Gallo said. “His was one of my favorite classes.”

Malori Barnhart was in Blakslee’s classes for three years before graduating from Eastern in 2019. She’s studying music education at Western Michigan University.

“He was always so real and transparent with all of us,” Barnhart said. “He always told us, ‘Yeah, the struggles are real but also the love is real so you have to be there and experience things.'”

He impacted his students by being himself, she said.

“I aspire to be at least a little bit like him,” Barnhart said.

He also ran the “Teenage Werewolves Horror Film Fiend Club” at Eastern, an afterschool group that watched and discussed horror films together.

Becki Reiner, who helped him expand the club online over the last few years, said it inspired more than just high school students.

“He could pull themes and lessons from all sorts of films and show how they lent themselves to different historical times and politics,” she said.

A friend to many

Close friend Gaebril Jones, 48, said Blakslee moved from Lansing to Grand Rapids two years ago to begin a new chapter of his life.

He brought his “bright energy” with him, Jones said, making almost friends with the people he met there.

“You could be having a horrible day and somehow he could walk in the room with his strut, his smile and just a couple glib remarks, comical banter and whatever your problem was kind of just solved,” Jones said.

Girlfriend Heather Sekerak, 35, said she discovered she had so much in common with Blakslee after meeting him at Stella’s Lounge, the Grand Rapids bar where they both worked.

“The most honestly selfless person I think I’ve ever met in my entire life,” she said. “He would drop everything to do something for anybody. Whatever he had on his plate just didn’t matter in that moment. He would be there for you.”

Long-time friend Dan Jaquint, 46, met Blakslee in the late 1990s when they were both members of local Lansing bands.

“We ended up forming our own band, The Fencemen, which he sang and wrote for,” Jaquint said in an email. “He was the smartest person I knew. His brain was like a library and he could retain so much information, it always amazed everyone.”

Blakslee carried a book and a notebook with him wherever he went, Sekerak said.

“He was a teacher, no matter where he was,” she said. “He would talk to you about anything at any moment and he would never make you feel small for not knowing something.”

Historic one-room schoolhouse in DeWitt Township goes on the market

To many, Blakslee was known simply as “TMB,” said Jerry Blakslee.

The nickname mirrored his initials, short for Tyler Mitchell Blakslee, but it actually stood for “that’s my boy.”

“That’s what I put on a cigar box back when he was first born,” Jerry Blakslee said. “So he sort of, through life, was called that and somehow his students picked it up.”

His son had endless energy,” he said, and “never sat down for a second.”

His interests were boundless, too.

Tyler Blakslee became ordained and certified as a marriage officiant, presiding over cousin Laken Stoliker’s marriage to her husband Travis in 2015.

Before the ceremony Sheeten said he met with both of them, asking them about their relationship and writing down details he spoke about during the wedding.

“He actually listened,” she said. “When he spoke he made every person in the room feel just as special as the two people who were getting married.”

His death makes “no sense at all,” Laken said.

Jerry and Karan Blakslee, Tyler’s mother, are planning two memorial services in Grand Rapids and Lansing. Details are still being finalized, but both will be next month, Jerry Blakslee said.

The goal is to remember Tyler Blakslee’s “love for life,” Jerry Blakslee said. “He was just a person with deep thought, but a big heart,” he said.

Former students are hosting a celebration of Tyler Blakslee’s life at 8 pm Saturday at The Avenue Cafe, located at 2021 E. Michigan Ave. in Lansing.