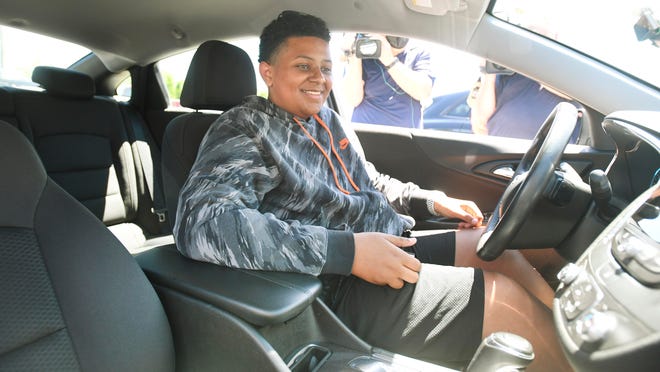 The gray 2018 Chevy Malibu, which Darien picked out a week prior, was donated by the Detroit Police Department, Wayne County Sheriff’s Office and the dealership. The Warthogs Motorcycle Club and Hired Guns Motorcycle Club – both made up of law-enforcement personnel – helped with the donation as well.

“My dad had the same type of car,” Darien said when asked why he chose that model.

A giant Batman logo on the hood of the car represented the fallen officer’s nickname. A Facebook post from Kristine Courts, Loren’s wife, the day after his death read: “All the news articles talk about is a DPD officer. He was so much more to me and the kids. Our Batman!”

Officer Loren Courts was killed by gunfire in an ambush July 6 on Detroit’s west side when responding to a 911 call reporting that a man was firing shots out the window of an apartment. A bullet struck Courts in the neck as he sat in his police cruiser.

Loren had been saving to buy a car for Darien’s 16th birthday, which is in November.

Darien beamed but look a little overwhelmed as he sat behind the wheel and news photographers got close with their cameras and reporters asked questions.

“Do you have a girlfriend?” “No,” he answered. To which someone said, “You’re ready for a first date now.”

Chris Werner, Hired Guns Motorcycle Club sergeant at arm, said, “We get very close as a family and what a lot of people forget is that even when our shift’s done, our mission really never ends.

“So to be able to get an opportunity like this to carry on the torch for Officer Courts, to help him and his family and to see the community come together and bond as one is always a phenomenal experience.”

Wayne County Sheriff’s Office Recruiter Mark Diaz said the donation was an example that in spite of all the evil in the world, there’s still a great deal of love. “Everyone who came out here on a Monday, took time off of work, to come out here and express that love for Loren’s family, that’s the story that truly needs to reach every corner of the globe.”

Scott Henley, the general manager of the Feldman dealership, said they threw in number of “add-ons” on the car, including a three-year, 36,000-mile warranty.

Loren’s father, Larry Courts Sr., a 32-year veteran of the DPD, thanked those in attendance.

“On Loren’s behalf, I just wanted to make sure everybody understands that there was absolutely nothing that he did not like about his job,” Larry said. “He chose me as his hero, I don’t know why he did that, but I will be ever grateful for all the outpouring of love and respect for him.”

Other such donations have flooded in for the Courts family following Loren’s death. The Robert J. Turner Foundation will be presenting Kristine Courts with a $25,000 check from private donors. The foundation will also partner with Kroger to donate $5,000 dollars in gift cards to the family.