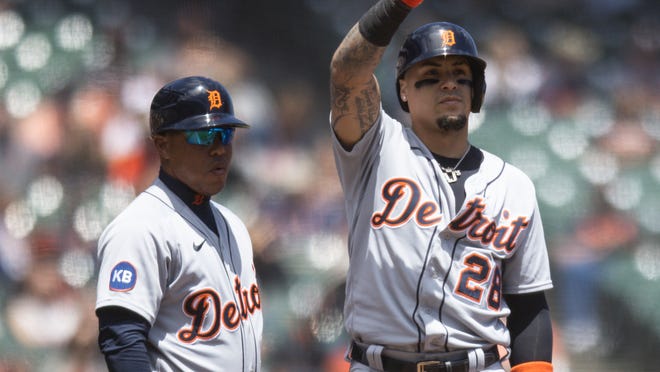 With one swing, Eric Haase put the Detroit Tigers on top.

Manager AJ Hinch has vowed to give Haase more playing time, even with two-time Gold Glove winner Tucker Barnhart on the roster, and the decision seems to be paying dividends.

At least it did Wednesday, when Haase lined a second-pitch slider over the wall in left-center field for a two-run home run in the sixth inning. His fifth home run of the season snapped a 1-1 tie, leading to a 3-2 win over the San Francisco Giants in the finale of the two-game series at Oracle Park.

“‘Catch a winner and get a hit’ is something I always say,” Hinch told reporters in San Francisco. “When you get the big hit, it’s even better. I love how he handled the game behind the plate. He also came up big with the homer when we needed it.”

RAVE ROOKIES:Why Riley Greene’s single happy start with Tigers is of no concern

“We’re playing better, which is good,” Hinch said. “We’re chipping away at trying to turn this thing around. … You’re starting to see more players contribute to wins, and that’s what you want.”

Rookie outfielder Riley Greene, hitting .286 in 10 games since his promotion on June 18, finished 1-for-4 with a single in the fourth inning. He produced two of the three hardest-hit balls of Wednesday’s game: a 109.7 mph lineout in the eighth and a 106.5 mph groundout in the sixth.

After Haase created a two-run margin, Detroit’s bullpen fended off the Giants across the final four innings. Left-hander Andrew Chafin pitched a scoreless sixth inning, but right-hander Alex Lange created a mess in the seventh.

Lange allowed three of the first four batters he faced to reach safely: Tommy La Stella (single), Wilmer Flores (walk) and LaMonte Wade Jr. (single), who loaded the bases with one out.

Mike Yastrzemski nearly grounded into an inning-ending double play, but he beat the throw for an RBI forceout.

Right-hander Michael Fulmer replaced Lange, who threw 19 pitches. He walked Evan Longoria on four straight balls after working ahead 0-2 in the count. Once again, the Giants had the bases loaded.

“He’s pretty calm under pressure,” Hinch said. “He doesn’t back down, but he’s also not going to mis-execute usually. I love his demeanor and him coming in and having a little bit of a leash to pick where he was going to go after the two hitters. He got the job done.”

Fulmer returned for the eighth inning and worked around a two-out double without damage, earning his four outs on 24 pitches. Left-handed closer Gregory Soto notched his 15th save in 17 opportunities. He kept the Giants from scoring in the ninth.

Before Haase stepped to the plate, Giants manager Gabe Kapler emerged from the dugout for a mound visit. Wood had allowed back-to-back singles — Javier Báez and Miguel Cabrera — to open the inning, but Greene grounded into a double play for two outs.

Instead of grabbing the ball, Kapler let Wood stay in to face Haase.

In 2021, Haase hit .283 with 11 home runs against left-handed pitchers. This season, though, the slugger entered Wednesday hitting just .222 with one homer against lefties.

The Tigers scored their first run in the fourth inning, as Báez tripled to right field. Cabrera brought him home with a sacrifice fly to center field, tying the game at one run apiece.

Just as important as Haase’s home run, right-hander Rony García shined in his seventh start — and 15th game — for the Tigers. The 24-year-old gave up one run on four hits and two walks with four strikeouts across five innings.

The Giants scored their only run against Garcia in the first inning.

“He settled in and started spinning the ball a lot better as the game went along,” Hinch said. “That’s a tough lineup for him, because they can throw a lot of left-handed hitters up there.”

Garcia then posted zeros on the scoreboard. His best act was escaping a bases-loaded, one-out jam in the third: Joc Pederson struck out looking and Brandon Belt flied out to left field.

In the first inning, Longoria hit a down-and-away fastball for an opposite-field solo home run to right field. His eighth homer this season gave the Giants an early 1-0 advantage.

His breaking ball also produced seven of his 14 called strikes.

“He’s got to gauge where that breaking ball is going to start and where it’s going to finish,” Hinch said. “They stayed inside the strike zone for the most part of the two games, and he kept challenging them. We played some defense behind him and made some plays, but even when we didn’t, he came back and threw strikes, which is one of his calling cards.”