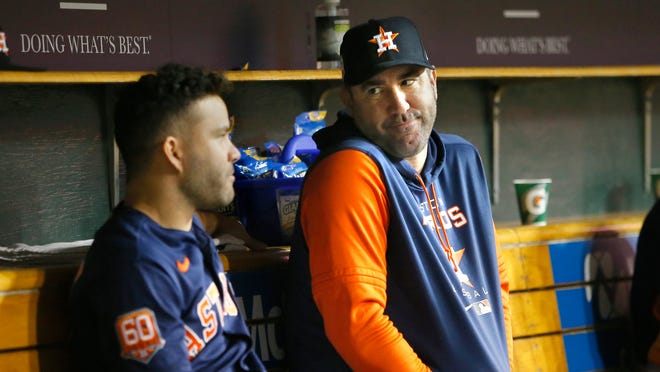 The Houston Astros, armed with the best record in the American League, reminded the Detroit Tigers of their supremacy in the simplest way possible.

They didn’t blast home runs, nor did they strike out double-digit batters.

But the Astros executed plays at a first-class rate.

“That’s 91 wins for them,” Tigers manager AJ Hinch said. “They get there with elite defense and good hitting, and their pitching is really good. They don’t have a lot of holes. But there’s areas that we could have made it a little bit of a better game.”

WHAT TO WATCH:Seven reasons to pay attention to Tigers in final month of 2022 season

The Tigers, known for a sloppier style of play, lost 7-0 on Monday in the first of three games against the Astros at Comerica Park. Two runners were thrown out at home plate in the first three innings, and left-hander Eduardo Rodriguez allowed five runs across five innings.

“It’s hard to chip away if you can’t make those runs count,” Hinch said.

Astros left-hander Framber Valdez struck out eight batters and blanked the Tigers over nine innings, throwing 72 of 107 pitches for strikes. He has 24 consecutive quality starts. Superb defense, highlighted by the first and third innings, helped Valdez keep his streak alive, but the 28-year-old also dominated on his own.

“We had opportunities early when he was wobbling a little bit,” Hinch said. “Once he settled in, he was in total command. He’s got really good stuff. He’s on a long streak of pitching well. He’s got a ton of confidence. And they play with a lead very, very well.”

The Tigers (54-87) have been shut out for the second straight game and the 21st time this season. Detroit is tied with the 1973 New York Yankees and 1976 Chicago White Sox for the most shutouts in a single season among American League teams since the designated hitter was implemented in 1973.

The 2022 Tigers are five shutouts away from tying the franchise record, set in 1904.

“You got to score to win, so the loss is more frustrating than that,” catcher Eric Haase said. “We definitely got to find some opportunities to manufacture some more runs, whether it be moving guys over instead of taking a (strikeout), moving guys with the infield back, getting some of those runs. Some missed opportunities that we’ll hit the drawing board and come back to.”

Right-handed reliever Will Vest threw 31 pitches in the ninth inning and conceded two runs on a hit-by-pitch and three singles.

In the first, Riley Greene drew a leadoff walk, reached second base on a wild pitch and moved up to third base on a throwing error by catcher Martin Maldonado. He was later thrown out at home on Javier Báez’s broken-bat bouncer to first baseman Yuli Gurriel.

“Riley misread the play,” Hinch said. “It’s no more complicated than that.”

Haase singled with two outs, but Spencer Torkelson flied out to deep center field to end the inning. Torkelson hammered the ball 416 feet to center field with a 105.5 mph exit velocity, a home run in 24 ballparks but not Comerica Park.

The Tigers tried to score again in the third, but once again, the Astros’ defense shut them down. Willi Castro ripped Valdez’s first-pitch curveball for a double to right field and appeared to score on Báez’s single. The ball from Báez shot through the infield and rolled toward charging left fielder Yordan Alvarez.

TIGER’S NEWSLETTER:At the plate, what’s another (blanking) loss or 20?

Alvarez fired a bullet to Maldonado, who applied the tag. Initially, home plate umpire Cory Blaser ruled Castro safe at the plate. The Astros challenged the call on the field, and the replay review overturned the decision and kept the Tigers from scoring.

“When Willi got thrown out, he didn’t take a great route around third,” Hinch said. “He came out and then came in and then came out again. That probably cost him a foot or two, and in a bang-bang play at home, those are tough.”

Astros’ offense from another planet

Four pitches into the game, the Astros controlled a 1-0 lead against Rodriguez.

Jose Altuve, Houston’s leadoff hitter, singled on a second-pitch fastball and stole second base for his 17th steal in 18 attempts this season. An ensuing single from Jeremy Pena — a weak hit on a second-pitch cutter that got past a sliding Báez — scored Altuve from second base.

Pena stole second base and came around to score on Alex Bregman’s single for a 2-0 advantage.

“I was trying to locate everything the way I wanted,” Rodriguez said. “My cutter was working good, but they made a good swing and got a base hit. That’s something that you always got to have in your mind — you execute the pitch, and the result is what happens. … The only thing I can control is throwing the ball right where I want it.”

The Astros continued to pick on Rodriguez in the third inning, as three straight batters reached safely with one out: Pena (single), Alvarez (single) and Bregman (walk). With the bases loaded, Kyle Tucker grounded into a double play. The Astros increased their lead to 3-0, though, since the Tigers retired Tucker running to first base before tagging out Bregman advancing to second base.

A defensive mistake from the Tigers helped the Astros tack on a pair of runs in the fifth inning. To get there, Pena doubled and Alvarez singled to put runners on the corners. Bregman grounded the ball to third baseman Ryan Kreidler, beginning a rundown between third base and home plate.

While the Tigers threw the ball three times — from Kreidler to Haase to Kreidler to Torkelson — Pena managed to stay between third and home long enough to let Alvarez and Bregman move into scoring position. The Astros scored two runs for a 5-0 lead on Tucker’s groundout and Gurriel’s 36th double of the season.

“We had one non-boxscore play with the rundown,” Hinch said. “If we could’ve kept the batter runner and the other runner at first and second, rather than second and third, we would have probably kept them from scoring a run.”

Sights and Sounds: Enjoying Nature on the Boardman River in Traverse City