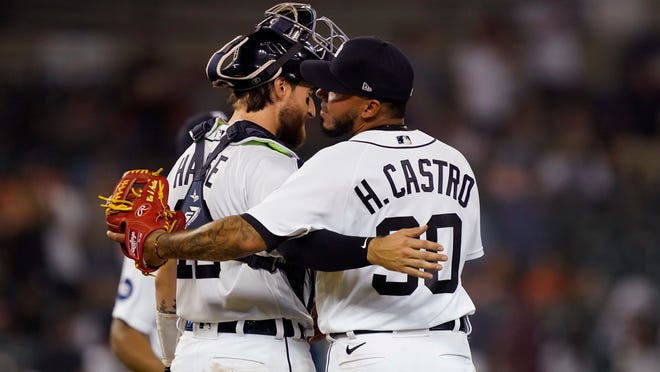 Detroit Tigers reliever Wily Peralta appeared to stumble on the mound at the end of his delivery Tuesday.

He grimaced after throwing in the eighth inning during the 11-4 win over Cleveland. Peralta reacted the same after his next pitch.

Athletic trainer Doug Teter walked to the mound and removed Peralta from the game, and Wednesday morning, the veteran right-hander landed on the 15-day injured list with a left hamstring strain.

“I don’t see how he avoids the injured list,” manager AJ Hinch said Tuesday night. “He waved us off, walked around and thought everything was fine. On the pitch pitch, it grabbed him. We can’t not have our guys available.”

JEFF SEIDEL: Riley Greene has given Tigers an unmistakable spark: ‘It’s a lot of fun when we win’

To replace Peralta, the Tigers recalled right-handed reliever Will Vest from Triple-A Toledo.

The organization demoted Vest to the Mud Hens on Tuesday, since the Tigers needed to add starting pitcher Drew Hutchison to the active 26-man roster but couldn’t exceed the 13-pitcher maximum.

One day later, Vest is back in the big leagues.

[ Why Wily Peralta is so beloved inside Tigers’ clubhouse: ‘Huge part of this team’ ]

Peralta, despite 5.4 walks per nine innings, has been a key piece of the Tigers’ bullpen in 2022.

The 33-year-old has a 2.16 ERA with 20 walks and 28 strikeouts, allowing just one home run, across 33⅓ innings in 23 games (one start). He primarily pitches the fifth and sixth innings, serving as a bridge between the starters and high-leverage relievers.

The severity of his hamstring injury is unclear, as is the timetable for his return.

Vest, 27, has a 3.41 ERA with 11 walks and 32 strikeouts across 29 innings in 26 outings. He posted a 6.52 ERA over 10 appearances in June, though his month-long results were inflated by allowing two runs June 17 against the Texas Rangers and five runs June 26 against the Arizona Diamondbacks.