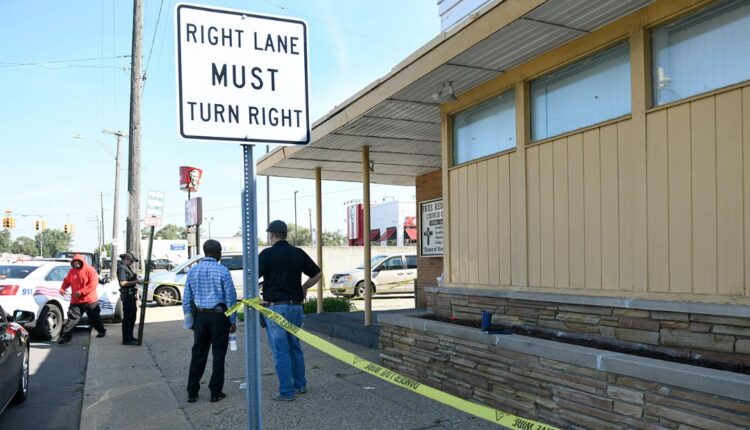 “Yesterday I made a plea to family and friends of the shooter to turn him in. It didn’t seem likely that he could be taken into custody without incident, but, in fact, somebody close to him did respond and it was that community input that allowed the police officers to take this individual into custody without any further violence,” Detroit Mayor Mike Duggan said during a news conference Monday.

The shooting left three people dead and one wounded, Detroit Police Chief James White said. He added that the suspect has no criminal history but police have “some indication that there is mental illness.”

“This didn’t need to happen,” White said. “Once again, Detroiters are reeling after lives were senselessly taken at random from our community … There are more questions than answers, but Detroiters can sleep peacefully tonight knowing this suspect is off the streets.”

Each of the victims appeared to have been targeted randomly and are not believed to be connected, White noted. One was waiting for a bus, another was walking his dog, and another was simply on the street, White said. None of them were robbed.

A fourth victim was shot around 7 am after he noticed the suspect peering into cars and told him to go away, White said.

The most critical piece of evidence in the investigation was that all of the shootings had 9-millimeter casings, the police said.

The casings were taken to the National Integrated Ballistic Information Network (NIBIN) office where it was determined that the same firearm was used in all four shootings, Detroit Police Commander Michael McGinnis said.

And after a member of the community identified the suspect, police were able to find a 9-millimeter firearm through a search warrant of the suspect’s home and matched the firearm to the one used in all four of the shootings, McGinnis said.

“We have mobilized all of our technology, our personnel, our intelligence and our community assets to investigate these incidents,” White said.

In a statement, White said the suspect “easily obtained” the gun.

“With the help of critical information from the community and strong support from the FBI, ATF, and Michigan State Police, Detroit police officers took the suspect into custody today without incident,” he said.

CNN’s Eric Levenson and Laura James contributed to this report.