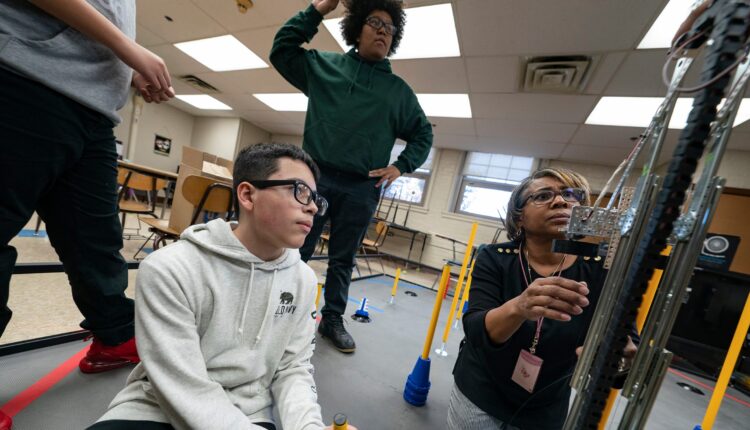 Much can be learned about Detroit native Tracy Ortiz by studying her Thanksgiving menu for this year.

The lineup of savory dishes including turkey, ham, macaroni and cheese, green beans, yams, dressing, rum cake and banana pudding reflects that the time Ortiz spent watching her mother (Cheryl Pouncey) prepare holiday feasts while growing up — first in the Virginia Park neighborhood, then by City Airport, and later near her high school, Osborn (Class of 1984) — was time well spent.

But the fact that the 56-year-old Ortiz did not rush home immediately after the final school bell rang Tuesday at Clippert Multicultural Magnet Honors Academy, which would have provided her a much needed early start to her holiday cooking, is an even more revealing statement about Ortiz’s commitment as an educator.

“Growing up, my family didn’t have a lot of money, but I was exposed to different opportunities and that is what I want for all of my students,” said Ortiz, a National Board certified science teacher who on Tuesday — the last day of school for Detroit Public Schools Community District students before the Thanksgiving holiday break — was spending extra time after school to work with members of Clippert’s robotics team.

Three days before the Tuesday after-school session, Ortiz was with the team in Novi for a FIRST (For Inspiration and Recognition of Science and Technology) Tech Challenge competition. One day earlier, Ortiz and robotics team members brought their competition robot to nearby Maybury Elementary School (4410 Porter St. in Detroit), where the younger students received an introduction to robotics. Following the demonstration at Maybury, Ortiz and the same students dashed to the Michigan Veterans Foundation (4626 Grand River in Detroit), where they dropped off a variety of supplies collected from the entire Clippert school body for veterans in need.

More from Scott Talley:Detroit mom baked sweet potato pies for years. Then she turned it into a business.

Despite the recent whirlwind of activity, and after teaching five science classes and one STEM lab class on Tuesday, Ortiz displayed no outward signs of fatigue as she assisted students after school who were preparing for a Dec. 3 FIRST Tech Challenge competition at Calihan Hall on the campus of the University of Detroit Mercy. That event, just like the recent competition in Novi, will send the top performing middle school robotics teams to a state championship competition in December. And while Ortiz was perhaps too busy to talk about being tired, she did have plenty to say about the good company she has been keeping because of robotics.

“I am thankful for these students because they don’t have to do this,” said Ortiz, who has been teaching at Clippert for 13 years and coaches the robotics team with “strong support” from assistant coach Cynthia Hollingshed. “We started off at the very beginning of school and we’ve been meeting every Tuesday and Thursday and every other Saturday. I’m just thankful that they have the spirit to do this kind of work and stick with it, especially like last Saturday when none of the equipment worked and we weren’t able to score points and they were still trying.

“I’m thankful that they have that kind of heart and spirit to keep going even in the face of adversity. I guess it’s not all about winning because we learned a lesson through competition that day and they still had smiles on their faces and were working very hard, even at the end.”

Sprinkled across Ortiz’s colorful science classroom at Clippert are equipment and awards that represent other enrichment activities that her students have participated in through the years including, Destination Imagination (DI), which brings students together in teams to solve open-ended STEAM challenges that encourage creativity . At the most recent DPSCD STEM Awards ceremony in June, six of Ortiz’s students were honored for their participation in DI. And in May, Ortiz traveled to Kansas City with students that competed in the DI Global Finals. Students taught and nurtured by Ortiz also have won Science Fair Grand Awards, studied water quality issues at the Rouge River, collected atmospheric data that has been shared with NASA and participated in many other educational adventures that have taken them outside of their cozy Clippert school environment situated in the heart of southwest Detroit at 1981 McKinstry St. But none of these things would have been possible if Ortiz had not literally made the decision to choose children over birds about 25 years ago.

“When I was younger I wanted to be a teacher, but I was very shy and a little afraid to pursue it,” said Ortiz, who worked 10 years at the Detroit Zoo as a bird keeper after graduating from the University of Detroit with a bachelor’s degree in biology.

Ortiz said having to give informal presentations at the zoo, including around the penguin area, began to make her believe that she could stand in front of kids for a living. That feeling of comfort prompted Ortiz to go back to school, which led to her earning a master’s degree in education from Wayne State University in 2000.

“I enjoyed my job at the zoo because I have always loved animals, but I like what I’m doing now more — most definitely,” said Ortiz, who will celebrate 23 years as a Detroit public schools teacher in January.

And on Tuesday it was apparent that the students working on robotics-related tasks in two parts of Clippert are also delighted that Ortiz made the decision to teach.

“She (Ms. Ortiz) is one of the greatest coaches ever,” sixth grader Andrzej Sanchez said emphatically, using his words and hands. A programmer on the team, Sanchez got involved in robotics at his new school because he enjoys programming and building things. And he has already demonstrated a hunger to learn more through online sites he visits, including code.org, and by talking to robotics participants at other schools during workshops and competitions. 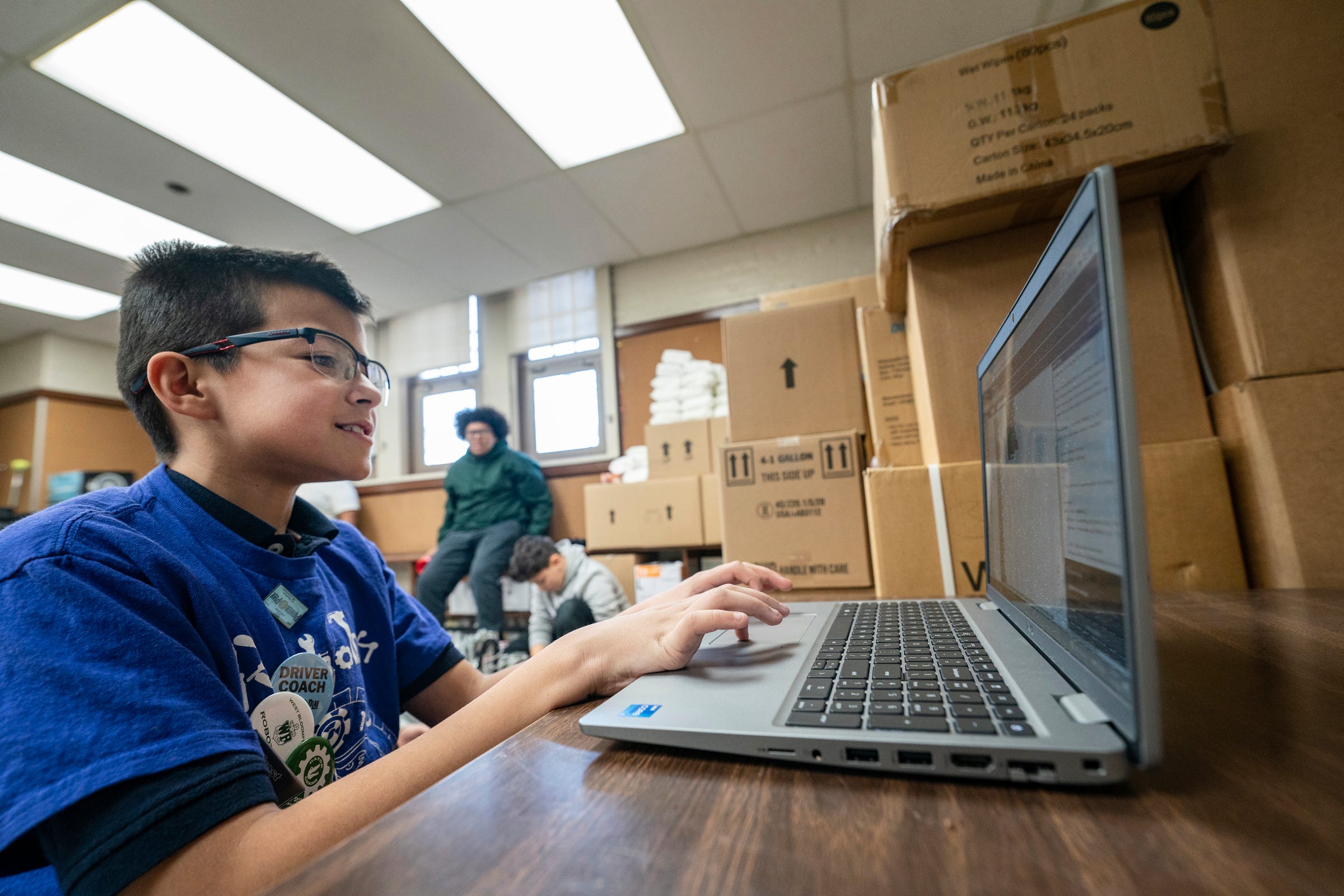 Eighth grader Marcus Barber is a builder for the Robo-Eagles, which is the team’s competition name. Barber’s actions throughout the after-school session were calm and measured, as could be expected given his elder status on the team. But when Barber was asked what he has most enjoyed about his robotics journey, his excitement and enthusiasm came out.

Ortiz says she leans heavily on Barber and all of the Robo-Eagles, whose other members are Angel Garcia, Danna Hurtado, Jeimy Duran, Aixa Lozano, Carla Brioni, Emerick Hernandez, Tiziano Garcia, Andres Garcia, Emily Carrillo and Valentina Fuentes, in in addition to Sanchez. As Ortiz tells it, she immensely values ​​the input of her students and outside resources like the nonprofit Motor City Alliance because robotics is not her “strong suit.” In fact, Ortiz says she felt like a “fish out of water” when she first got involved with robotics five years ago, but continued because she saw the kids were “having fun and were engaged.” And when further explaining her motivation, Ortiz reaches back in her personal journey and points to Joyce Smith, her cheerleading coach at Osborn High School, who also was teaching business classes at Randolph Vocational Center during the same time. 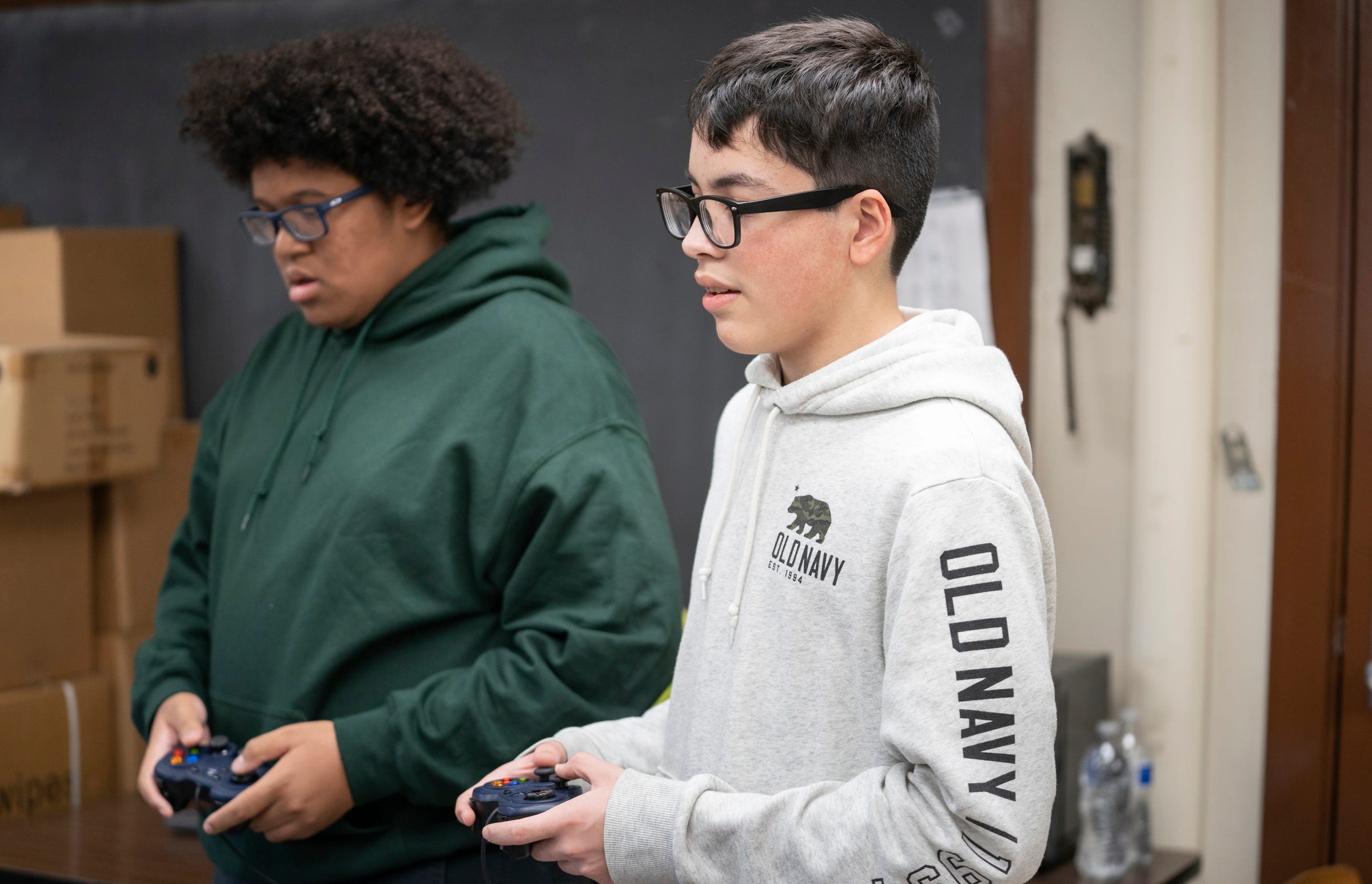 “There are so many similarities because Ms. Smith said she had absolutely no idea what she was doing regarding cheerleading in the beginning, but she learned along the way, which is what I’m doing with robotics,” said Ortiz, who gave up the marching band for the cheer team at Osborn.

Smith was not among the 16 or so people that Ortiz and her husband, Jose, a Detroit Police Department sergeant, planned to host at their home for Thanksgiving dinner. But Ortiz says Smith’s impact on her life is always felt.

“Ms. Smith will be with her family for the holiday, but she is always welcome wherever I am,” Ortiz said. “I think I’m in the position I’m in today because of her. She was very caring, took us under her wing, and made sure we were exposed to things that would help us be successful in life. When I was filling out my application for the University of Detroit, she helped me and she continues to check on me and all of the young ladies she coached to this day. Everything I do today to expose students to opportunities, that was instilled in me, and instilled in all of us, by Ms Smith.”

Where: Calihan Hall on the campus of the University of Detroit Mercy, 4001 W McNichols Road

At stake: Area middle school robotic teams participating in the FIRST (For Inspiration and Recognition of Science and Technology) Tech Challenge will compete in a series of matches and also will be judged on their engineering approach and community engagement. The event is free to the public and opening ceremonies begin at 10:30 am, with matches starting at 11 on the top teams from the Detroit Qualification Event will advance to the FIRST Tech Challenge State Championship–Southeastern Michigan Region, which will take place Dec. 8-10 at Macomb Community College.