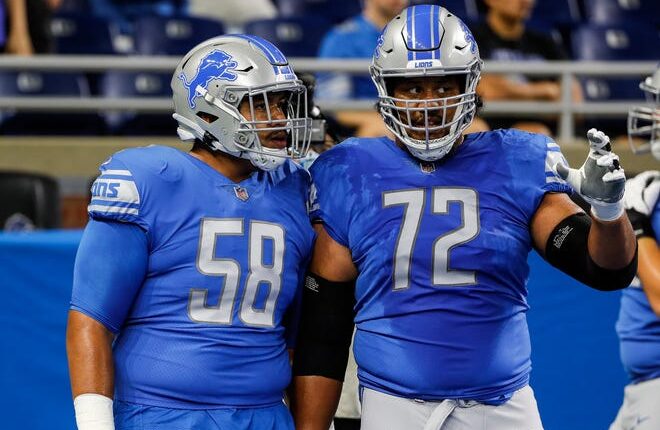 The Detroit Lions have lost a starting offensive lineman to injury before their season-opener for the second straight year.

The Lions placed right guard Halapoulivaati Vaitai on injured reserve Monday, meaning he will miss at least the first four games of the regular season. The Lions open the Sunday season against Vaitai’s old team, the Philadelphia Eagles.

Vaitai played 29 snaps in the Lions’ preseason-ending loss to the Pittsburgh Steelers, the same as the rest of the team’s starting offensive line, but sat out the team’s lone open practice last week with a back injury.

He missed six games with a foot injury in 2020 and one game each because of a brain injury and to COVID-19 last season.

The Lions have high hopes for their line this fall after injuries derailed the unit in 2021. Left tackle Taylor Decker fractured his finger in practice before last year’s season opener and missed the first eight games of the season, and Pro Bowl center Frank Ragnow missed most of the season with a foot injury.

The Lions’ projected starting line did not play a single snap together in 2021.

With Vaitai out, the Lions will turn to either Tommy Kraemer or Logan Stenberg in his absence. Kraemer made three starts as an undrafted rookie last season and played right guard with the second-team offensive line most of camp. Stenberg, who worked primarily at left guard this summer, missed most of last season with a knee injury.

The Lions also were awarded Drew Forbes on waivers Monday from the Cleveland Browns. A sixth-round pick by the Browns in 2019, Forbes has appeared in three career games. He spent parts of the 2019 and 2021 seasons on injured reserve with a knee injury, and opted out of 2020 during COVID.

Lions offensive line coach Hank Fraley has embraced expectations that his unit will be one of the NFL’s best this season, and he touted the line’s depth as one reason why late last month.

“We got a bunch of just professionals in that group,” Fraley said. “You guys know, a lot of those guys have been around. The team hasn’t changed much in the O-line room, but they just go out and work and they work well together, and we definitely have that play mentality. Whoever’s in there, we’re getting the job done. Plug and play, too, that’s kind of what it was last year and it’s fun to see.”