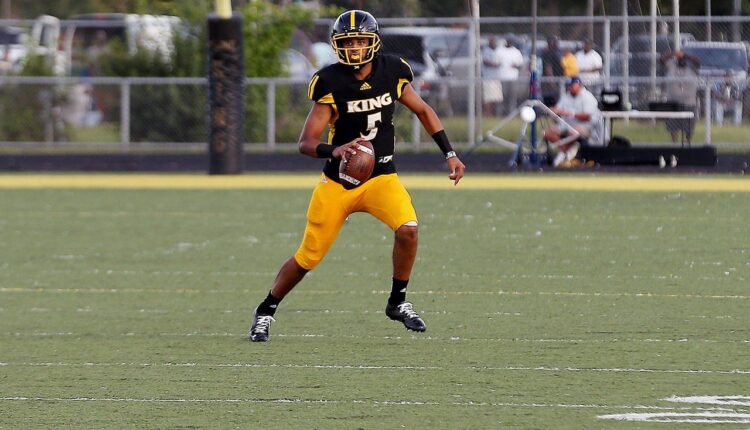 Detroit King shuts down Cass Tech for three quarters, hangs on for 28-23 win

DETROIT — After three quarters of football on Friday night, it seemed Detroit Martin Luther King was going to have no problem leaving Detroit Cass Tech’s field with a victory. King had a 28-10 lead heading into the fourth quarter and had limited Cass Tech to less than 100 yards of offense.

But rivalries are never that easy.

Two fourth quarter touchdowns by Cass Tech cut King’s lead to 28-23 with 2:53 left to play. Suddenly, King was a position where it needed to convert a late first down or Cass Tech could get the ball back with a chance to win.

Facing a third-and-2 with under two minutes to play, King senior quarterback Dante Moore finished the game the way he started it by connecting on a pass for a big gain. Although Moore didn’t have to flash his arm strength, he connected with a wide open running back Joshua Rodgers on a short pass, which then turned into a 31-yard gain down to the King 25.

It took Moore only four plays to get King on the board to open the game as he connected with senior Jameel Croft Jr. for an 82-yard strike for the score. Instead of a short pass like he had to end the game, Moore launched the ball about 50 yards through the air and hit Croft in stride as the speedy wide receiver took it the rest of the way.

“I knew to put the ball in the air and let him go get it,” Moore said.

Moore showed his arm strength again on the final play of the opening half with another touchdown pass. Although it went in the books as a 29-yard touchdown completion, the throw was much further as Moore was forced to retreat deeper into the backfield and roll out to his left.

Seeing a wide open Xavier Newsome on the back right corner of the end zone, Moore launched a pass while retreating and getting hit in the face by a defender.

“My whole lip is numb from that,” Moore said. “I remember I rolled out, I threw the ball, and I got hit in my helmet and my teeth bit my lip. The whole left side of my bottom lip is numb. As I said, it’s coming out here, making plays and being a playmaker. Shout out to my team for getting open and finding the open space. When I rolled out, coach (Terel Patrick) said leave it all on the field tonight.”

The touchdown pass to end the half gave Detroit King a 28-10 lead and all the momentum.

Through one half of action, Detroit King out-gained Cass Tech, 202-38, on offense. Cass Tech’s lone touchdown was the result of a 59-yard kick return by Sean Hodges kick return by that set up Cass Tech at the 14 yard line.

In fact, Cass Tech did not break 100 yards of offense until the fourth quarter.

“I just think our guys are playing hard, man,” said King coach Tyrone Spencer. “We’ve really been going to work every single day to just improve the defense from Week 1. We knew we had some new guys and we just kept improving it.”

Cass Tech only had one offensive play go for more than 15 yards on the night. That one play also happened to be the Technicians’ final offensive play of the game when senior quarterback Leeshaun Mumpfield passed to Elijah Jordan for a 37-yard touchdown with 2:35 to play.

“When we’re getting after the ball, we’re unstoppable,” said King defensive lineman Kenny Merrieweather. When the line is getting pressure or the DBs are catching picks and forcing all different kinds of things, I feel like that’s the things that win the ball game.”

Merrieweather even caught a 12-yard pass for a touchdown in the second quarter to give King a 21-7 lead with 8:18 left in the half.

“We came out firing on offense, playing physical and fast,” Merrieweather said. “That’s how it’s supposed to be. Normally, we’re a second-half team, but today we really fired off and got physical in the first quarter and second quarter.”

After scoring four touchdowns in the first half, King opted to play go a bit more conservative to open the second quarter by running the ball and taking its time between plays. Despite picking up just one first down on its opening drive of the third quarter, King had nearly wasted half of the quarter’s game clock before Cass Tech got it hands on the ball again.

Cass Tech had the ball for just 3:38 of the third quarter.

Cass Tech would break through for its first touchdown of the second half with 7:24 to play when Leeshaun Mumpfield found Corey Sadler Jr. for a seven-yard touchdown pass. King led, 28-16, after the 2-point conversion failed.

King tried to milk more clock on the ensuing drive, but it stalled out as starting running back Sterling Anderson and offensive lineman Jonathan Slack were among the King players who left the lineup during the game with some injury issues.

When King attempted to punt, bad snap over the head of Moore set up the Technicians with the ball on the 35 yard line. Three plays later, Mumpfield passed for the final score of the game.

“I don’t know if we got complacent,” Spencer said of Cass Tech’s fourth-quarter surge. “I know, offensively, we wanted to run the ball. I just wish the defense played a little better, giving up those points at the end. We could have kept them at 10 points and I would have been a bit more satisfied.”

Moore finished the game 15-for-24 passing for 227 yards and three touchdowns. Croft Jr had 122 receiving yards and a touchdown on four receptions.

Mumpfield finished 11-for-16 for 105 yards and two touchdowns. Neither team could get much going on the ground as Cass Tech finished with 29 rushing yards while King had 70. Before he left the game, Anderson scored a nine-yard touchdown for King in the first quarter and finished the night with 32 yards.

King’s win marked the first time it had ever won on the current Cass Tech field, as it’s previous win at Cass Tech was when the old Cass Tech school was still standing.

Four Corners: Why Downtown Traverse City’s Most Iconic Buildings Are All Selling At The Same Time