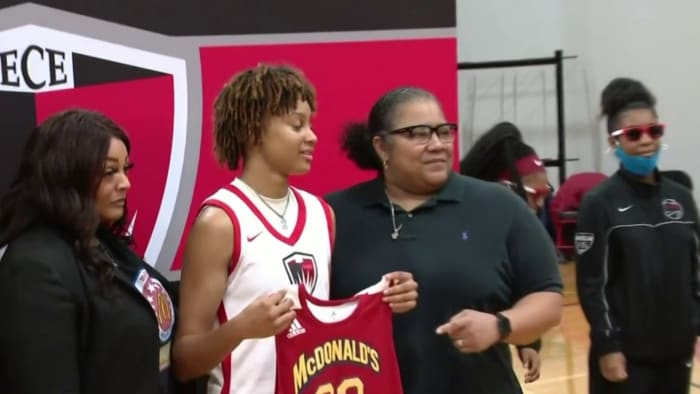 DETROIT – Ruby Whitehorn is the first girl’s basketball All-American from the state of Michigan since fellow Lady Pioneer Rickea Jackson won it in 2019, and there is an excellent connection between the two.

Jackson and Whitehorn have known each other for a long time.

“I’ve known Rickea since I was a kid,” said Whitehorn. “We challenged each other since we were in rec league. We were teammates and Rickea, coming here she challenged me every day in practice.”

“I would come from middle school and practice with the high schoolers ever since I got here in the sixth grade,” Whitehorn said. “It was just a great experience for me to look up to them.”

Whitehorn says she was inspired by what she saw from the high school team, and who wouldn’t? When you think of the dynasty coach Monique Brown has created at Edison. Three straight miss basketball award winners are Edison Pioneers. Jackson in 2019. Gabby Elliott in 2020 and Damiya Hagemann in 2021.

Once Whitehorn got to high school, coach Brown put her on the b-team.

“That was my way of getting her to stay at Edison, said Brown. “We had Rickea, we had Damiya, all miss basketballs. (Whitehorn) was looking like, ‘where am I going to play?’ (I told her) Listen, I have a plan.”

Jackson gave her McDonald’s All-American shoes to coach brown to eventually give to Whitehorn.

“(Jackson) gave coach Brown her shoes to give to me when she felt like I was ready,” Whitehorn said. “(The message behind the shoes from Jackson), she was saying, ‘don’t wear them, go and get your own.’”

Whitehorn got the shoes her sophomore year oh high school, and she worked every day on her game to one day get to that same level.

This season is Whitehorn’s senior year, and she ranked 15th in the country. Coach Brown says Whitehorn is frequently the best player on the court.

“(Whitehorn) is so special because she can dominate the game without scoring baskets,” Brown said.

A few years after receiving Jackson’s shoes, Whitehorn was named a McDonald’s All-American herself; one of 24 girls basketball players in the country, she received her All-American jersey last week.

“It really didn’t hit me until they handed me the jersey,” Whitehorn said. “At that moment, I really felt proud.”

Whitehorn will play for Clemson next year, where she will major in architecture, but before that, she says she has a state title to try to win and a younger generation of Lady Pioneers to inspire.

“When it was my turn, I took the opportunity,” Whitehorn said. “I would just tell (the younger generation) to be patient.

The McDonald’s All-American game will be held in Chicago on March 29.

Benzie County Welcomes Back the ‘DOGMAN’ Crew for Third Film