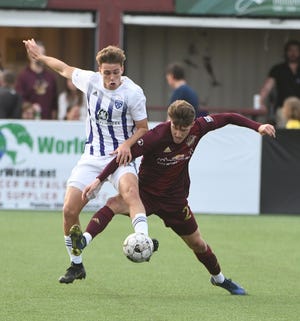 Detroit City FC was hoping to build off its best win in league play, rack up three critical points and get some revenge in the process against the first-place team in the USL Championship’s Eastern Conference.

Instead, Le Rouge was turned back in a 1-0 loss to a Louisville City FC squad that finished the match with nine men Saturday night at Keyworth Stadium in Hamtramck.

After a scoreless, well-fought first half, the lone goal came in the 66th minute when Louisville’s Sean Totsch was awarded and converted a penalty kick past DCFC keeper Nate Steinwasser.

Detroit City (10-9-6) couldn’t find the equalizer the rest of the way, even after Louisville’s Wes Charpie received a red card in the 69th minute and Wilson Harris exited after picking up his second yellow card in stoppage time.

Le Rouge had his share of scoring opportunities. In the 26th minute, Rhys Williams fired off a shot that just missed the net. Then in the 51st minute, Antoine Hoppenot had a strike that hit the post. DCFC also had three corner kicks in the first half but couldn’t capitalize on them as it fell at home to Louisville (17-4-3) for the second time this season.

The two clubs met in the Round of 32 in the US Open Cup, a match that Detroit ended up losing in a penalty kick shootout.

Detroit City FC will return to action next weekend when it travels to South Carolina on Aug. 27 to take on Charleston Battery.

Black journalists must continue to fight for diversity, equity and inclusion ⋆