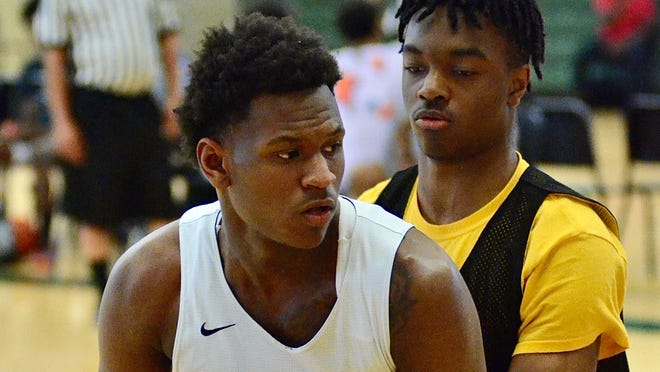 Just how new is Chas Lewless to the Detroit King boys basketball team?

While talking about the goals he wanted to achieve with the Crusaders, he didn’t even know what the Detroit Public School League called its all-conference team.

And, yeah, he wants to make that team. But his new coach has higher expectations for him than that.

“Honestly, that’s low-hanging fruit for him to be All-PSL,” King coach George Ward said. “There won’t be a guard in the PSL better than him. I want him to set his sights higher than that, and that’s what we’re going to do for him.”

One of the best point guards in the Catholic League has transferred out.

After starting for Detroit Catholic Central the past two years, and leading the Shamrocks to the 2022 state quarterfinal and a CHSL tournament runner-up finish, he’s now joining Ward and the Crusaders, who a year ago were 19-3 overall and spent several weeks atop the Associated Press’ top-10 poll in Division 1.

So let’s first quash the rumors.

No, there is no bad blood in the water between Lewless, CC and Shamrocks coach Brandon Sinawi. And Sinawi, while being both on and off the record during interviews, has done nothing but wished Lewless all the best at King.

No, this has nothing to do with recruiting. Lewless was already getting plenty of college looks while in Novi.

And, no, Lewless isn’t benefiting from some sort of Name, Image and Likeness deal to transfer downtown.

Simply put, this comes down to traffic. Like toe trucks, steamrollers and orange cones.

More:With his buddy beside him, Detroit Catholic Central’s TJ Nadeau should be an elite scorer

It took the Lewless family anywhere from 60 to 90 minutes to get the kids to school last year. Chas’ younger sister, Hannah, who just helped Royal Oak Shrine win a state title in girls soccer this month, needed to be dropped off in Royal Oak, and then Chas was headed to CC’s campus on Wixom Rd.

If congested traffic, car accidents or road construction made Hannah even 1 minute late for school, that meant Chas was going to be several minutes late.

And that’s when they were living on the southwest side of Detroit. They’ve since moved to the east side, close to King’s campus. Those drives were about to become much, much worse.

“And there’s always construction and traffic on 696,” Chas joked. “Without traffic, it’s like 30 or 35 minutes straight to CC from my old house. With traffic, it has taken me 45 minutes to an hour. And that’s not also counting stopping at my sister’s school. With CC being in Novi and me living “In Detroit, it was already a hike. Now I’m on the east side and it’s even farther. So it’s just easier and more convenient for me to go to King, which is a great school with great coaches, so it worked out.” ”

Chas’ father Chris is calling it a “homecoming” story for his son.

If Ward has his way, it should be quite the homecoming story indeed.

Chas, a 6-foot-2, 170-pound All-Catholic League selection who averaged 11 points and three assists as a sophomore, steps into an incredible situation.

Running the show in the PSL has been former King point guard Chansey Willis Jr, who averaged close to a triple-double and wound up being named Michigan’s Mr. Basketball as a senior. What’s more, when he signed with Saginaw Valley State University, he became the first Mr. Basketball winner to sign with a Division II school.

Chas, who is now receiving true college interest now that he’s a junior, has already heard from the likes of Western Michigan, Toledo, Temple, Cleveland State, Marist College, Mercer University and Georgia, among others, but, obviously, he has big shoes to fill. But he should fit right in at Willis Jr’s old spot.

“Chas has got the ‘it’ factor, and, so far, he’s been a great teammate and a good player,” Ward said. “But we want him to be better than good. It’s a blessing for us to get him, but we’ll be a blessing for him as well. I expect him to be the best guard in the state of Michigan. Not just in his senior year but right now. That’ll say something about our program, too, if he can become that.

“Having Chansey the last four years has provided us with some great things. But as similar as they are as players, and with both of their first names starting with a ‘CHA,’ there are also some differences. Chansey was amazing for us, but he had to do a lot on his own. With this group, we’ll be better. You’ll see a better defensive team overall. We’ll be a better offensive team, too.

“We’re looking forward to Chas being the best, and those aren’t unrealistic expectations for him. In his mind, and in my mind, he could be the best point guard in the state of Michigan over the next two years.”

So what does Chas add to the squad?

Well, he’s a gamer. As he proved with CC, no deficit is too large, and no game-winning shot is too big to attempt.

On top of that, he is one of the best ball handlers in the state. He can weave through traffic, scoot to the rim and create shots for both himself and his teammates.

And he’s got a great outside shot.

He’s been a pretty heads-up defender, but Ward thinks King can make Chas the best defender out there.

“He’s just got to keep working and listening,” Ward added. “He’s going to get so much better defensively that people will be able to see the difference in him by Dec. 1. I don’t think he can have that high IQ on offense and just not have it on the defensive end. He’s got “To use that size and IQ on the defensive end, too. If he wants to average 25 to 27 points a game and eight or nine assists, he’s got to hand check. It’s going to start on the defensive end. And that comes with physical.” , mental and emotional growth. We’re going to push him every day. Some days won’t feel good or sound good to him over the next two years.

But being the best will come at a cost, one that has already taken an emotional toll on Chas.

“I’m going to miss it, for sure,” he said. “Not even just the basketball program but the school itself. The brotherhood there is crazy, and a lot of people talk about it all the time, but it really is a real thing.

“I’ll definitely miss my teammates and my friends in school who didn’t even play sports. I’ll miss the different events and the things we used to do that were super fun. I’ll miss the faith aspect of it. I joined the Catholic Church and was confirmed when I was at CC. They’re all still going to be my family, and I didn’t leave on bad blood. I’m just going to miss all the guys there.

“But, at the same time, I’m looking forward to this new school I’m at and making new friends.”

If Chas lives up to the hype, all of this fuss will have been worth it. And if he does win Mr. Basketball his senior year, he’ll have coaches from both King and CC at the annual ceremony inside the Detroit Free Press’ office. Not even bad traffic will keep the Shamrocks from attending that.

Catching Up With: May Erlewine