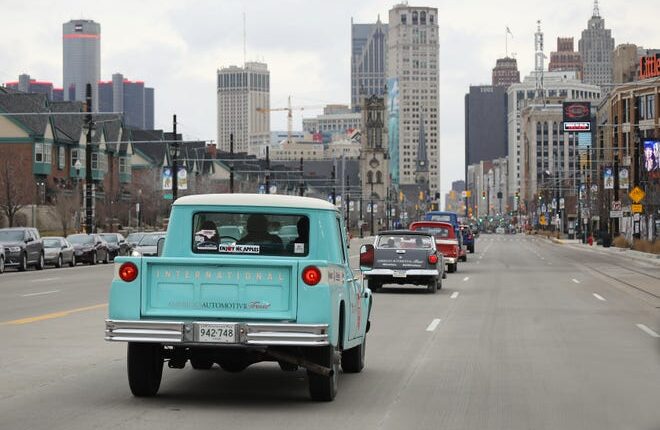 Two of southeast Michigan’s signature automotive events will join forces this September to promote their new formats and the beauty of fall in the Great Lakes.

From the riverfront to the Cultural Center, Detroit will be abuzz with everything from the latest electric vehicles and self-driving technology to million-dollar classics as the North American International Auto Show and Detroit Concours d’Elegance share a weekend.

The auto show’s first weekend, including the ever-popular Charity Preview on Friday night, will overlap with the Detroit Concours Sept. 16-18. Other events will include the auto show’s first public days showcasing dozens of new cars in Huntington Place convention center, car collectors gathering near Comerica Park on Saturday and 140 classic cars of all eras on the grounds of the Detroit Institute of Arts on Sunday, Sept. 18

“Downtown Detroit is going to be incredible,” NAIAS executive director Rod Alberts said. After a 3⅓-year hiatus, the auto show returns, with plans to take advantage of the beautiful fall weather. Details will be announced closer to the event, but expect everything from food trucks to outdoor test drives and tech demos.

Tickets to NAIAS, including the Charity Preview, go on sale July 11.

The auto show took place during winter for decades. Due to the pandemic, this will be the first full-blown show since January 2019, when the Detroit Auto Dealers Association decided more temperate weather would provide a better showcase for test drives, tech demos and new vehicles.

Topping it off, a handful of classic cars will caravan from LeMay-America’s Car Museum in Tacoma, Washington, to Detroit, via some of America’s finest national parks and a stop at The Gilmore Car Museum near Kalamazoo.

Called the Drive Home, the event has been part of the auto show since 2014.

Some vehicles from the Drive Home will also shuttle auto show attendees from Huntington Place on the river to the concours in Midtown.

Previously called America’s Concours d’Elegance, the concours — a term for classic car shows — has been a summertime fixture in suburban settings for decades. New owner Hagerty, the Traverse City-based insurer of classic cars and wooden boats, decided to move it to Detroit’s Cultural Center because of the city’s rich automotive history.

“”We’re delighted to be in Detroit. We believe in the city and its automotive history,” said Chris Brewer, Hagerty director of event communications. Longtime GM design chief Ed Welburn will be honored at the concours.

“Having these two incredible automotive events at the same time is great for the city. September is a fantastic month in Detroit and the auto show is a fabulous event. …Our dates couldn’t be better.”

Classic car ride and drives, Rad costumes, Lemons for all

The concours expects about 140 vehicles in 17 categories. They’ll be showcased on the grounds of the Detroit Institute of Arts and adjoining streets.

Classes of vehicles will include:

The auto show routinely drew hundreds of thousands of visitors in the winter, while the concours’ July schedule attracted thousands, including car collectors from around the world.

The auto show kicks off with news conferences to unveil new vehicles and industry days on Sept. 14-15. The Charity Preview on Sept. 16 benefits southeast Michigan children’s charities, and the show opens to the public Saturday, Sept. 17, and runs through Sept. 25

While the official concours is Sunday, Sept. 18, several events are planned for Saturday, including a “cars and caffeine” morning gathering in Comerica Park parking lots; free ride and drives in classics; RADwood, “awesome vehicles of the ’80s and ’90s and a costume contest for the coveted raddest dressed;” Concours d’Lemons show of “oddball, mundane and truly awful” vehicles; a kid zone and more.

Tickets to the Detroit Concours d’Elegance are available here.

In America, Cancer Patients Endure Debt on Top of Disease