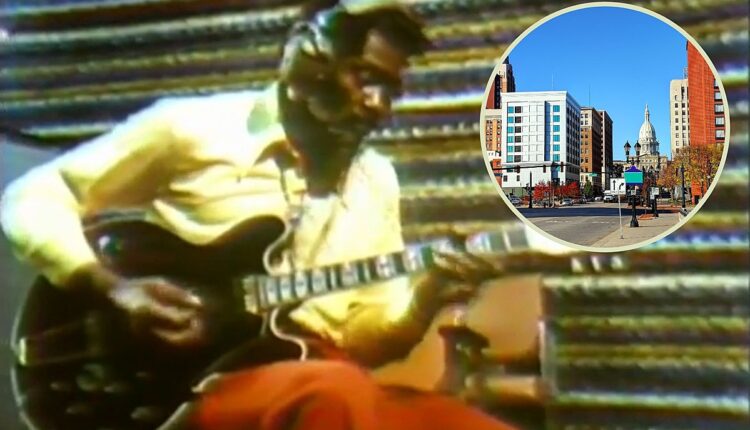 Chuck Berry is often considered the “Father of Rock and Roll” after releasing legendary tracks like “Johnny B. Goode, Maybellene, Roll Over Beethoven & “Rock and Roll Music.” Going through social media I stumbled on a record that I never knew was recorded right here in Michigan. It turns out that in 1971 he recorded his fifteenth studio album San Francisco Dues, the fifteenth studio album at Lansing Sound Studios. Strange thing is, nobody could find out where the studios were located, as they’re It turns out the man who started the studios, Bob Baldori saw the post and gave some crucial information regarding the project:

I started Lansing Sound on S. Logan St about 1965. Moved to Okemos very early 70s. Been going strong ever since. Two albums with Charles and hundreds of dates. Go to my Facebook page or www.boog.com for pics and history. San Francisco Dues (should have been Lansing Dues. Haha) here and Back Home (Chicago). Charles never left St Louis. I stayed at his home for years.

Bob Baldori wasn’t just the founder of Lansing Sound, he was also on two of Chuck berry’s albums, San Francisco Dues and Back Home. On those albums, he played the Electric Piano, harmonica, and piano (overdubs). He, along with Bill Metros, Jack Groendal, and Jeff Baldori was “The Woolies” who would often accompany Chuck Berry at his Michigan performances. Here’s a REALLY unique piece of info: the drummer on this album was Maurice White, lead vocalist for Earth, Wind, & Fire.

For all of their fame and fortune, sometimes things can go very, very wrong.

Hospital-Acquired Pneumonia Is Killing Patients. Yet There Is a Simple Way to Stop It.

Happiness via juice from Detroit’s Fork in Nigeria food truck