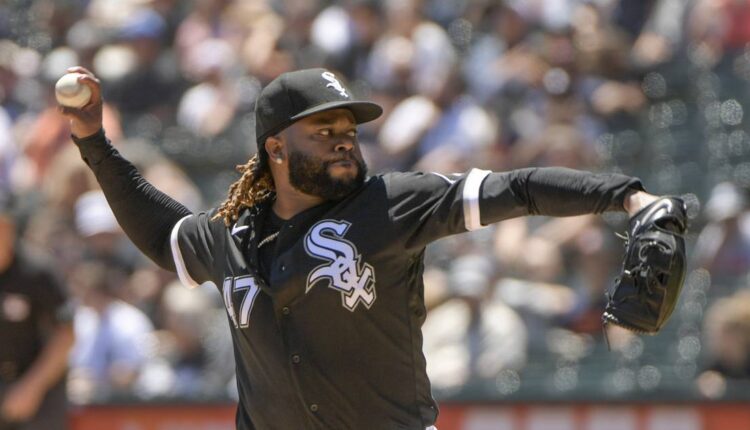 Fans stood and applauded as Johnny Cueto walked to the dugout after retiring Tucker Barnhart on a flyout to left to end the eighth inning.

It was another day, another impressive outing for the veteran Chicago White Sox right-hander.

Cueto allowed five hits and struck out five in eight innings, pitching the Sox to an 8-0 victory against the Detroit Tigers in front of 29,215 on Saturday at Guaranteed Rate Field.

Cueto, 36, pitched at least eight scoreless innings for the 17th time in his career and for the first time since shutting out the San Diego Padres on May 23, 2016, while with the San Francisco Giants.

White Sox starting pitcher Johnny Cueto delivers against the Tigers in the first inning Saturday at Guaranteed Rate Field. Cueto allowed only five hits and struck out five in eight innings, leading the Sox to an 8-0 win. (Mark Black/AP)

“He can go through the lineup and if he had six at-bats against him, he would show you something different every at-bat,” Sox manager Tony La Russa said. “He’s very smart. He’s one of those pitchers that can watch the hitter and get a feeling of the guy sitting in or looking away or looking hard or soft just by how they look and the way they swing at things.

Cueto has pitched at least six innings in nine of his 10 starts since joining the Sox in May.

“He’s picked us up when we needed it,” La Russa said.

Cueto (3-4) hasn’t received a ton of run support this season, but he had plenty to work with Saturday.

“It’s important when you get that kind of run support,” Cueto said. “For me that was a boost. Then I told myself to keep performing and keep the ball down.”

Gavin Sheets sparked the offense, hitting a three-run homer in the first. He got the green light on a 3-0 pitch and made the most of the opportunity.

“I knew that (Tigers starter Garrett Hill) wanted to come to me, didn’t want to get bases loaded for (Yoán) Moncada,” Sheets said. “In that situation, I’m just trying to put my best swing on it and see what happens.”

A day after being voted a starter for the All-Star Game, shortstop Tim Anderson started a two-out rally in the second with a double. He scored on a Luis Robert single. José Abreu drove in two with a double, extending his hitting streak to 14. It’s the seventh hitting streak of at least 14 games in Abreu’s career.

According to Elias, he is one of four Sox players to record at least seven 14-plus-game hitting streaks in franchise history, joining Hall of Famers Nellie Fox (nine), Luke Appling (eight) and Eddie Collins (eight).

After Abreu’s double, the Sox didn’t get another hit until the sixth when Seby Zavala led off with a double against reliever Will Vest. Anderson drove Zavala in with a single. Leury García scored later in the inning on a wild pitch.

It was the fourth time the Sox have scored at least five runs in one of Cueto’s starts. And the first of those, May 16 at Kansas City, reached five in extra innings.

Cueto has found a way to keep the Sox in games.

Cueto’s eight innings marked the longest start of this season for the Sox. He lowered his ERA from 3.30 to 2.91 while ending the Tigers’ winning streak at six.

“He’s a pitching artist,” La Russa said. “That offense is going good. He very rarely misses over the plate. Just got the edges. Changing speeds. By the time you slow your bat, he throws it by you. You quicken it up and he gets you out in front.”

Cueto already was looking forward to getting back to work.

“I just trust my routine. I just like to work hard. After an outing like (Saturday), tomorrow I’m going to be working as hard as I’ve been working the whole time, doing my steps, climbing some steps and just running.”