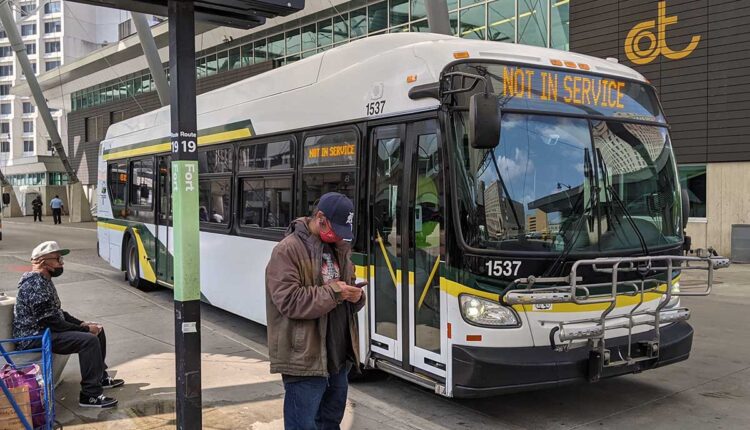 Schetrone Collier learned at a young age that when it came to transportation, he had to fend for himself.

“I’d be cold, wet and sometimes seeing the bus headlights was almost like salvation coming to me,” said Collier, the newly elected president of the Amalgamated Transit Union Local 26, which represents between 350 and 400 DDOT drivers.

Schetrone Collier started his term as ATU Local 26 president on July 1. Collier, a driver since 1989, said he’s hoping to help DDOT improve service and conditions for its bus drivers.

Collier, who took the union leadership post July 1, talked with BridgeDetroit about the state of public transit in the city, struggles of recruiting and retaining bus drivers and his initial goals as president of ATU Local 26.

Detroit’s bus riders and drivers have long advocated for more reliable and safe transit services and there have been some positive changes. DDOT is using $51 million in federal COVID-19 rescue aid for payroll, capital costs and other preventative maintenance needs. For drivers, a contract reached last spring between the union and City of Detroit provided the first raises in three years and officials unveiled an incentive program last month that will pay drivers up to $4,000 annually in attendance-based bonuses.

Still, Collier said, troubles remain for the system that “has historically failed the citizens of Detroit.” He’s seen it through his own eyes as a rider and, since 1989, as a DDOT driver. He’s taken pride in showing up for work every day and being on time, because he knows all too well that there’s “always somebody waiting for me.”

A: I would like to build on the successes of those that came before me, to keep my membership strong and to help the City of Detroit provide the service to the people out there who need it the most, which is our passengers.

I come from a strong union background as both my parents worked for General Motors Co. My father for 43 years, and my mother for about 20, until she was injured on the job. I was born and raised here. A hard working, middle-class family man, so hard work for me came naturally. I saw my parents do it every day. That was embedded in me as a child, so I carry that as sometimes I have to have a superhero’s mentality. Like I’m going to go out here and save people because, I’m telling you, I have been at stops in below zero weather waiting on a bus to the point where I couldn’t feel my toes or face. I have empathy for people who were out there and so I showed up every day. I just did my job and I know my drivers will do the same.

Q: What are the three biggest needs for Detroit bus drivers?

A: Competitive wages, better safety and better equipment, which is not just something for the drivers, but all of the things impact the passengers as well.

To be able to make sure that you have drivers coming to pick up people waiting at bus stops, you have to pay them a fair wage that’s equal to other surrounding areas because we’re being poached by other (companies) who need people with (commercial driver’s licenses) because we just have not taken on the mindset of being competitive for employees.

We have just become basically the minor leagues for everybody that needed a person with a CDL. We had droves of people come here. The department wastes thousands and thousands of dollars training them and then they walk away within the first six months. So wages aren’t just about hiring people, but keeping them here as well.

Second, behind pay, is safety for the drivers. Our drivers are dealing with a lot of abuse from our passengers.

Then you have to worry about (COVID-19) with drivers and passengers, which is like throwing gasoline on a fire that’s already burning. We had one of our drivers who had a passenger spit on them. It’s things like that we have to stop from happening or it’ll be really hard to keep our drivers here.

Lastly, we need better equipment, and that means buses. For the driver that reports every day, they need to know that the equipment that he’s going to take out is safe and reliable. (DDOT has 292 buses in its fleet. The oldest bus has been in service since 2010). What driver wants to drive buses that constantly need maintenance every shift?

Q: The city has a longstanding bus driver shortage, how can DDOT officials address that? (Collier told BridgeDetroit that DDOT needs about 250 more bus drivers to increase frequency on bus routes, which typically have wait times of 30 minutes to an hour).

A: I’m not one to bring private philosophy into a public job because we know from looking at the past that it doesn’t work, but (DDOT can improve by) understanding that you have to compete like a private company for employees.

You have to make the place worker friendly. If you look at the biggest companies in the world and look into their philosophy of how they treat their employees, it may help you get a clearer understanding of how you can successfully recruit and retain people.

I always show people that your job is more than what it pays you. It has to be a work friendly place. I have consistently, over my years here, had to deal with a lot of bad managers at DDOT. So I can only imagine if we didn’t have unions how bad it would be.

City officials in general need to open their eyes to the reality that you have to address people’s needs. That’s what you were elected for. When employees tell you they need something, listen to them.

Q: What are common misconceptions about DDOT and its drivers that you hope to change?

A: Probably that we don’t care. Believe me, you couldn’t do this job long term if you didn’t. So most days – and when I say most, I really mean most – you have to give more of yourself to this job than it ever really gives you back in value.

I picked up one guy in particular one day, he got on my bus and he had on a coat because it was winter. He sat down in the front seat, and he had tears in his eyes. I looked at him and I said ‘Sir, are you okay?’ He was like, ‘Nah, man. I’m about to go kill this girl.’ And his coat slightly opened, he had a shotgun under his coat sitting across from me. I had to talk to that guy, man. I was like, ‘Oh man, just come on and ride down to the end with me.’ I had to counsel this guy. We do a lot of counseling for people in this job. One of the things that people don’t know about us is that we care, we really do.

Q: What’s the state of public transit in Detroit today?

A:  It’s horrible. One of the things that I’ve watched my entire life is that DDOT has never really provided the service that we should be providing to the people here in the City of Detroit.

Not to say anything bad about SMART, but, I mean, we’ve always carried the bulk of the people in this region, but we’re consistently paid $3 or more less than them (DDOT drivers earn about $21.50 per hour, compared to about $23 per hour at SMART, according to ATU Local 26).

The passengers that they (SMART) carry are mostly Detroiters. I saw those companies before me advocate about expanding the routes of DDOT to serve the people of the City of Detroit trying to get across Eight Mile or up to Pontiac. We should have been doing that because (a lot of) those passengers who are riding the SMART bus are Detroiters anyway. Why aren’t we providing a service to them? Historically DDOT has failed the citizens of Detroit, I’ve seen it with my own eyes as a rider and as an employee.

Even with the (Regional Transit Authority millage) and the whole reason it failed (in 2016), I must tell you this union didn’t support it. We didn’t support it because in every little seminar or party they gave – and they spent millions – none of it addressed the issues of the citizens of Detroit. Any plans of fixing transit in this region that doesn’t include fixing it for Detroiters, I will not support it.

authored by
First published at https%3A%2F%2Fwww.bridgedetroit.com%2Fbus-union-leader-seeks-to-change-historic-failures-of-detroits-bus-system%2F