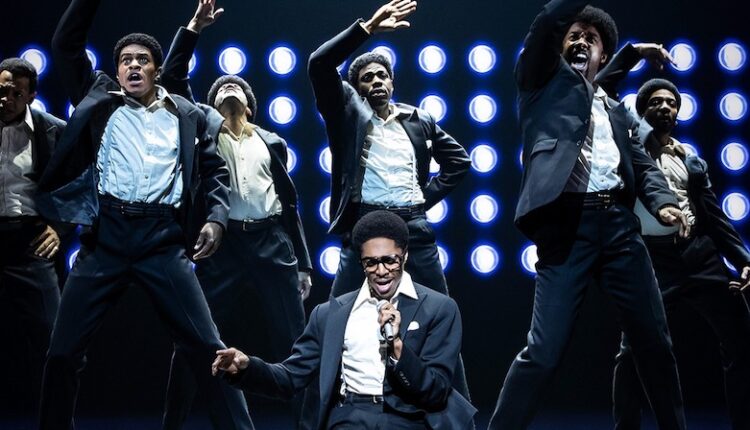 ‘Aint Too Proud,’ story of The Temptations rocks Detroit

DETROIT, MI–Jukebox musicals are designed to appeal to audiences who want to go to the theater to be entertained, not challenged, and for those who feel connected to the music either through passion, nostalgia or both.

Ain’t Too Proud: The Life and Times of The Temptations, now playing at The Detroit Opera House as part of the Broadway in Detroit series, manages to tell a real story, reminiscent of “Jersey Boys,” about Frankie Valley and The Four Seasons. The story here is compelling, and the music is even better.

The Temptations were seminal to the glory days of MoTown music. And like most of those acts, there were stories of heartbreak and tragedy before any of them took to the microphones off the street-corners, and certainly after the fame, money, drugs and booze started flowing.

One of the inevitable outcomes of the passage of time is attrition. And Dominique Morrisseau, who wrote the book for this show, uses Otis Williams’ (Marcus Paul James) , a founding member who outlasted all of his musical brothers, as the narrator/storyteller. The writing is smooth, and if you closed your eyes you could almost feel Williams holding forth on a front porch talking about his own glory days while someone cues tunes for the great grandchildren too young to know the classic tunes.

I’m glad the creators did not use the porch. Ain’t Too Proud has a lot of energy as the ensemble members go through drug use, love and love-loss, frustration with each other, with MoTown chief Berry Gordy. Otis Williams is still an active member of the group and holds all the rights to the music and name. Morriseau’s book is adapted from Williams’ 1988 memoir.

The well-cast show features actors who can sing and move (the Temptations song choreography was always delicious) like the original five. Any of these actor/singers could work in the band today, or when Lyndon Johnson was in The White House. Besides Otis Williams, there were Paul Williams (James T. Lane), Melvin Franklin (Harrell Holmes Jr.) Eddie Kendricks (Jalen Harris) and David Ruffin (Lawrence Dandrige).

The story is told in well-acted and narrated vignettes of key events and happenings in the quintet’s life and evolution as individuals and as a group. Those vignettes are punctuated with the music, with most songs being clipped for time, but still delivering what an audience wants. The pacing of the show is excellent.

We see crack-smoking, David Ruffin’s abusive relationship with MoTown siren Tammi Terrell (Shayla Brielle G.), encounters with Smoky Robinson (Lawrence Dandridge), Diana Ross (Amber Mariah Talley), Paul Williams’ alcoholism, the group’s reaction to the assassination of Martin Luther King Jr. and the riots in Detroit, Newark and elsewhere. And more events that push the evolution of the group forward into funk and beyond.

The Temptations’ music was incredibly smooth. They had and have a sound that is forever linked the quality of their classic songs: “Cloud Nine,” “The Way You Do The Things You Do,” “Just My Imagination,” “Get Ready,” “My Girl,” “ Ain’t Too Proud To Beg,” “Papa Was A Rollin’ Stone.” And their stage presence/choreography was always instrumental to their appeal and popularity. Many a young person tried to replicate the moves in their living room while watching American Bandstand or Ed Sullivan.

The underbelly of The Temptations – the drug abuse, quarreling, infidelity, the struggles of the individual members, does not detract from their legacy. Otis Williams has been the founder, caretaker, nurturer, life support and backbone of the group. Now 80, Mr. Williams must be ecstatic to see his life’s work come to life on stage in a truly enjoyable, meaningful way.

Ain’t Too Proud is playing at The Detroit Opera House through August 28.