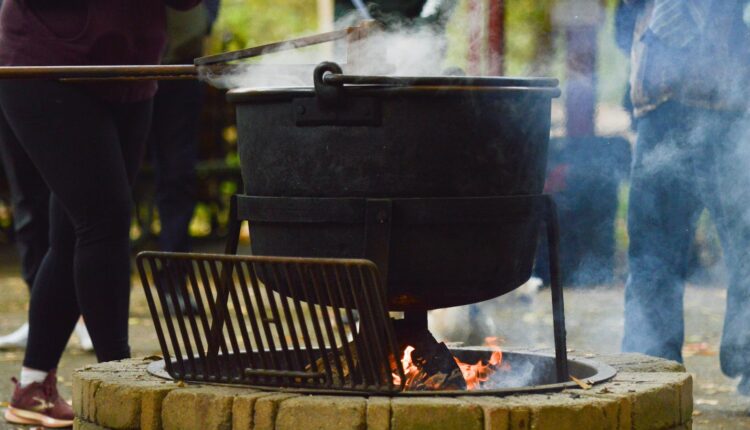 Since 1973, the Fenner Nature Center in Lansing has held the annual Apple Butter Festival. What started as a fundraiser for the center has now become a cherished community event for all generations.

“Way back when the pioneers started making (apple butter) here in America, they needed the help from their neighbors to make it,” development and events manager Alexa Seeger said. “It takes at least 12 hours to cook it over the fire and it has to be constantly stirred so everybody would get together with their neighbors. The kids would play, and the adults would stir the apple butter. They’d make cider and kind of get ready for the winter altogether, and that’s kind of the heart of the festival, too.”

“We like getting together with our community and just enjoying the beauty of nature and being together.”

Seeger said the festival still keeps that spirit of gathering as a community around the apple butter kettle to this day, but it’s gotten a little bigger since then. The center brings out heritage artisans like local glassblowers, lacemakers, quilters, weavers and potters to demonstrate some of the historic crafts that would have been practiced around the fall harvest in Michigan.

“Our mission is to connect people to nature here in the heart of Lansing,” Seeger said. “You get a lot of multi-generations here who like to come out to the festival. We have grandparents who bring out their grandkids to experience the festival like they did back in the day… I think the homey feeling of the festival is what really brings people back year after year.”

Some people, like Lansing native Tori Jefferson, have been coming to the festival since they were kids. Jefferson said that she regularly comes to the nature center to use the trails but hadn’t been to the festival in a few years. Her favorite part is stirring the apple butter.

“It made me really nostalgic of just stirring it around and seeing everybody so happy,” Jefferson said.

Others, like Ben Greene, came to the festival for the first time this year. Greene is an Idaho native but works as a resident physician at MSU, where he heard about the festival from a colleague.

“I think it’s a fun community activity,” Greene said. “It’s a great way for people to get out and enjoy something that the community offers and see the beautiful fall colors as well. And learn a little bit about the process of how to make apple butter.”

Peggy Roberts has been coming to the festival for over 10 years and likes that the festival gives people an opportunity to experience the nature center. She used to serve as the center’s board president and now comes back to walk the trails and volunteer for special events.

“People sometimes forget about these natural resources that we have all around us, and particularly for MSU students who come and go, they often don’t know while they’re here, what’s available,” Roberts said. “I think given the issues around climate change, how we’re utilizing our resources, it’s so important for people to get out and remind themselves of the healing powers of nature. I don’t care what mood you’re in, when you come out into nature, there’s a shift in the way you think about things. And I think more than ever, we need that now.”

This is the first year the center has held the festival since the start of the pandemic. Seeger said that the center saw more visitors during the pandemic than ever before, but they couldn’t really interact with others.

“(Having the festival back) means a lot because I didn’t really do much (during quarantine), I just stayed in my room like most people did,” Jefferson said. “Actually being able to get out and do things and see people, that’s the most important thing.”

Along with the opportunities for community members to gather, one of the highlights of the festival is its peak time to see the fall colors.

“I think my favorite part of the festival is just how beautiful the park is right now,” Seeger said. “With all of the leaves turning and all the people that we don’t necessarily get to see the rest of the year, all kind of gathered together. Seeing old friends you know, making new ones as we crunch through the leaves. It’s just a very peaceful feeling even in the midst of the chaos of a 4000-person festival.”