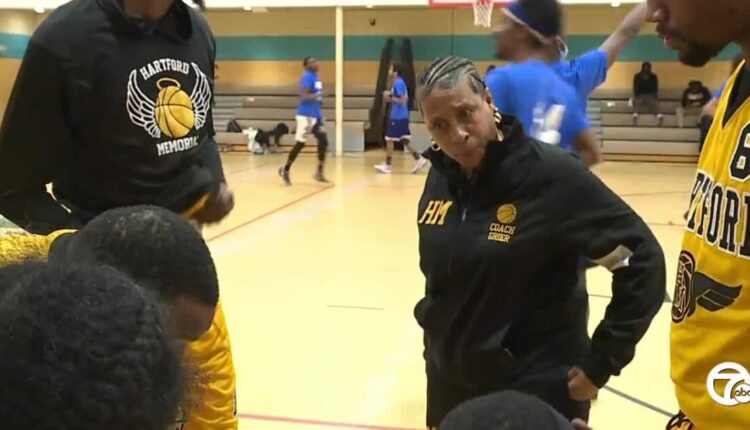 It may sound simple but for Jenna Grier, it’s been a battle to stay on top of the game and safe in the streets with a badge and a gun.

Along the way, she has managed to save lives that could easily have been lost by making her mark in a world dominated by men but in need of a woman’s touch.

“It’s not about me being a female. And you think because you’re a male coach that you’re supposed to be better than me — you don’t know my story,” Grier said.

Grier grew up in Detroit and was a star on Pershing High School’s basketball team has been a hoopster since she was a little girl.

“I love basketball. I would go to the park, I would walk miles and miles to play,” Grier said.

But her hoop dreams after high school were put on hold for motherhood. And a frightening moment would change her career path after a criminal was caught hiding in her car and a neighborhood store clerk chased him away.

“For years, I felt like maybe he raped somebody or killed somebody, so I said I wanted to be a police officer,” Grier said.

She signed up for the police academy and at the same time, Hartford Memorial Baptist Church needed a men’s basketball coach. But the naysayers said it was impossible to do both.

“I just don’t want to give up on my guys. Somehow, God’s will, I made it through the academy,” Grier said.

Her team that year was undefeated and champions.

As luck would have it, a cheerleader for her team was the daughter of the late and former Detroit Police Chief Benny Napoleon.

“He said, ‘Where do you want to go?'” Grier recalled Napoleon asking her.

She landed in a special first responders unit with missions like barricaded gunmen and presidential escorts. But a life-saving one was responding to the shooting of a Windsor constable. He was shot four times and left for dead.

“We got him in our scout car, called it out. I’ve never been so proud of the Detroit Police Department,” Grier said.

She and her partner were invited to Canada and given a Saint Ann necklace to remember him by.

“So by day, you’re a police officer and by night, you’re a coach of a men’s basketball team?” WXYZ’s Carolyn Clifford asked.

“Yes, I’ve been coaching at Hartford Memorial for over 23 years,” Grier responded.

Every Wednesday night, they practice. And every Saturday from November to March is their season.

“How successful of a coach have you been?” Clifford asked.

Delano Christian has been playing for her for 16 years.

Christian is in his 30s and also a police officer.

“She taught me right from wrong and that law enforcement is a good field to go into. She guided me to go into it,” Christian said.

She’s motherly, but motherly and a coach all in one. And she makes sure we’re doing what we’re supposed to do outside of the basketball court,” Christian said.

This season has been dedicated to the son of Christian’s brother Brian, who is also a police officer. It was Brian Christian who lost his 2-year-old son Brison to a random freeway shooting.

“I see you have Brison on the back of your jersey,” Clifford said.

“I got him right here too,” Brian Christian said showing his tattoo of his Brison on his arm.

“You said you weren’t going to play. What brought you back to play?” Clifford asked.

“It’s been real tough on me, and basketball has always been at an outlet for me,” Brian Christian said. “A lot of people on the team wanted to support my son as well, so they all came together collectively. They wanted to play the season out for my son.”

“She’s much more than just a coach for all you guys who are on her team?” Clifford asked.

“Yes, she’s like a mother to us,” Brian Christian said.

“We work hard as a family. Hartford isn’t just about basketball — we’re a family,” Grier said.

Grier was asked, “What is the most important ingredient for being a great coach — love toughness or respect?”