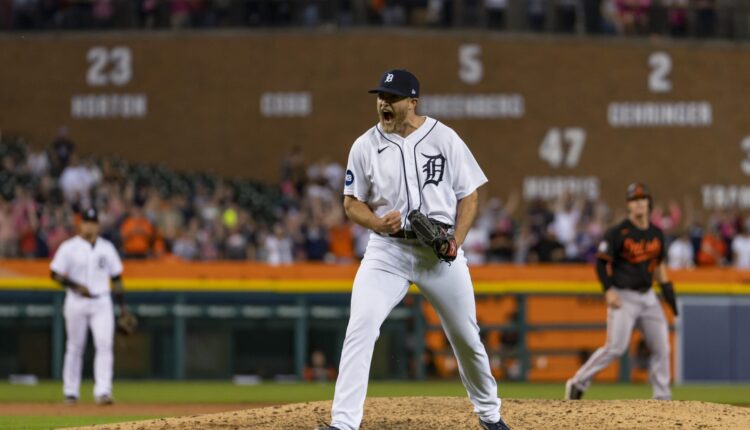 Will Vest’s changes lead to big save

The Detroit Tigers have built another high-leverage arm.

One of the great joys of writing about the Detroit Tigers, and following baseball in general, is the ability to be incredibly wrong.

All sports offer some level of unpredictability, but baseball is king when it comes to making analysts and forecasters look foolish. Last year PECOTA predicted the Twins would go 91-71 and the Tigers would be 67-95. That didn’t work out very well.

Injuries can spoil any season, of course, but we see players make huge changes all the time. Wade Davis and Andrew Miller were borderline big leagues as starting pitchers, but then became two of the most dominant relievers in baseball. Justin Turner and JD Martinez rode swing changes to multiple All-Star appearances. Lucas Giolito altered his pitching mechanics, while Corbin Burnes changed his pitch mix.

The point is, there are a hundred different ways to change or defy the odds in baseball. And that brings us to Will Vest.

How Will Vest Reshaped His Career

Will Vest would be a pretty cool story, even without his success this year. He didn’t pitch at all in his first two years at Stephen F. Austin State University, instead batting .177 as a reserve infielder. He underwent Tommy John surgery in 2016, and then he moved to the mound as a junior, where he was excellent, posting a 1.38 ERA over 45.2 innings.

But, with Vest’s limited track record and questionable competition (Stephen F. Austin was then part of the Southland Conference), he wasn’t a particularly hot commodity during the MLB Draft. The Detroit Tigers were able to nab him in the 12th round in 2017, with the 365th overall pick. And it wasn’t as if the Tigers knew they had a steal. His $100,000 bonus was the second smallest of any 12th rounder that year.

Vest’s early performance in pro ball didn’t really scream future MLB success, either, with a 5.18 ERA across two levels in 2018. But he improved in 2019, posting a cumulative 3.27 ERA over 55 innings while reaching Triple-A, and he earned a trip to the Arizona Fall League.

Then came the 2020 shutdown, and though Vest looked good in instructional league that fall, the Tigers chose not to add him to their 40-man roster. The Seattle Mariners selected him with the 10th pick in the Rule 5 Draft, and he made their club out of spring training.

He performed well in April, with a 1.32 ERA and 10 strikeouts over 13 innings, but things fell apart after that. Vest posted a 7.71 ERA in May, an 11.81 ERA in June, and by July the Mariners had returned him to the Detroit Tigers. He spent the rest of the season pitching for the Toledo Mud Hens, where he compiled a 4.91 ERA over 25.2 innings.

About a month ago we wrote about how the Detroit Tigers bullpen could be a nightmare this year, saying this about Vest:

Vest led all Detroit relievers with nine strikeouts this spring, and he saw big-league time with the Mariners last year after they selected him in the Rule 5 draft. But his slider was pummeled by MLB hitters and Seattle eventually sent him back to the Tigers. He will probably have to get some big outs in the first two weeks of the season, and a small uptick in velocity this spring (from 94.2 MPH to 95.3 MPH) may help. Level of Concern—High

So, naturally, the Detroit Tigers currently own the 3rd lowest bullpen ERA, Will Vest leads their relief corps in WAR, and he earned his first career save with a huge performance on Friday night. Baseball!

Vest gave up a pair of runs on April 16th against the Kansas City Royals, but since then he has thrown 12.1 scoreless innings, allowed just 2 hits and 2 walks, and struck out 18. So what exactly is going on?

Leave it to the keen eyes of our former MCB co-expert Rogelio Castillo to see it, but the movement profile on all of Will Vest’s pitches seems the have changed fairly dramatically. Here’s what we mean, in chart form:

If you hate numbers, here’s what that says in English. Will Vest is throwing his fastball harder and with more carry through the strike zone this year, at the expense of a little horizontal movement. He’s throwing his slider with essentially the same velocity and vertical break as last year, but he’s added nearly three inches of horizontal movement. And his changeup is firmer, with less sink but more running action.

How have these changes worked out for him? Let’s look at one more chart:

It’s still early in the season, of course, and the sample sizes are small. But Will Vest made some changes to his pitches this year, and right now he looks like a very useful setup man. And who knows, if he keeps pitching like this, Friday night’s save might be the first of many.