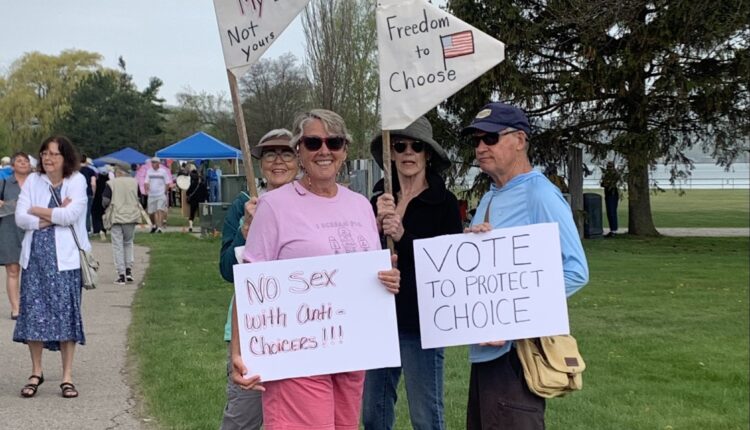 A little rain on Saturday did not stop protestors in Traverse City from standing up for what they believe in.

Hundreds gathered in the Open Space Park for the Women’s March.

This comes in response to the Supreme Court’s confirmation of a leaked draft ruling to overturn the Roe v. Wade decision.

Now, people all across the nation are speaking out and protesting the Supreme Court opinion.

“I was pretty outraged when I heard about that leak from the Supreme Court,” said Teresa Nardon of Traverse City. “You know, as a woman, I want to know that I have the choice and that I’ll always have a right to health care when I need it.”

Many feel frustrated with the Supreme Court right now.

“I think this is really, really an important decision, I don’t see it as political, I see it as who has control of your body,” said Jill Patterson of Petoskey. “It really bothers me that some people think it’s okay for the government to make decisions about women’s bodies, I think that’s totally wrong.”

Many reproductive rights groups were present, along with protestors from all over Northern Michigan.

Planned Parenthood was attempting to collect as many signatures as possible on a proposed amendment to the Michigan Constitution, called Reproductive Freedom For All.

“If we can get 426,000 signatures by June 15, then we’ll be able to get it on the ballot in November, so the voters of Michigan can vote before this themselves,” said Minnick.

Everyone present agreed that protecting Roe V. Wade is crucial and the only way to do so is by making their voices heard.

“We’re a country based on people and this is what we can do, this is how we show our power as the people and make people listen to us,” said Nardon. “I feel like protesting will get the attention of our lawmakers, they’re supposed to work for us and this is how we tell them what we need.”

“There’s a lot of misconception, a lot of issues out there that people better start to understand, because we’re going to lose something that we worked real hard in the 70s to get,” said Minnick.

Will Vest’s changes lead to big save

10-year-old killed, 3 other teens hospitalized after crash in Detroit