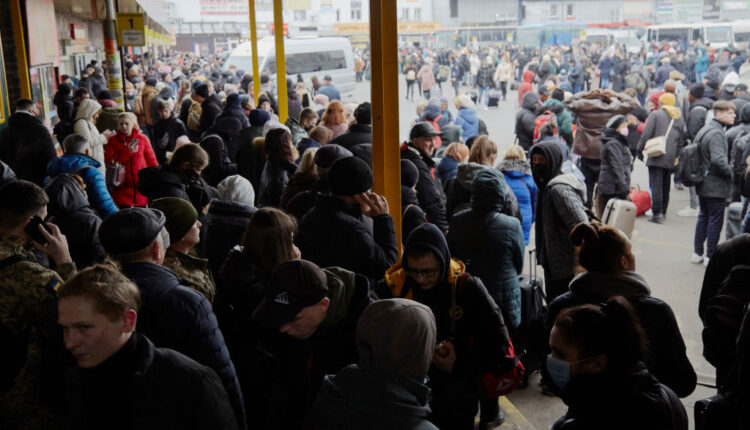 White House allows Ukrainian nationals to stay in the U.S. without fear of deportation ⋆

WASHINGTON — The U.S. Department of Homeland Security is granting Temporary Protected Status that will shield Ukrainian nationals living in the United States from deportation, following pressure from members of Congress.

“Russia’s premeditated and unprovoked attack on Ukraine has resulted in an ongoing war, senseless violence, and Ukrainians forced to seek refuge in other countries,” DHS Secretary Alejandro Mayorkas said in a statement. “In these extraordinary times, we will continue to offer our support and protection to Ukrainian nationals in the United States.”

Ukrainians living in the U.S. as of March 1 of this year will be eligible for TPS designation of up to 18 months; it will not apply to Ukrainians arriving after March 1. The designation will allow those in the program to be protected from deportation, as well as apply for work permits.

The Center for Migration Studies in New York estimates that there are about 28,000 Ukrainians in the U.S. that would benefit from the program.

Some states with the highest populations of Ukrainians without permanent status include Illinois, Michigan, Pennsylvania, Florida and New Jersey. In Michigan, that number is 3,600.

Ivan Avrutsky, who was born in Ukraine and resides in Rochester Hills for more than 20 years, attended a rally in support of Ukraine on Thursday at Wayne State University in Detroit. | Ken Coleman photo

TPS does not grant permanent U.S. status and only applies to those already in the country, not those who are  fleeing. One million people have left Ukraine, according to the United Nations Refugee Agency.

A letter, led by Rep. Jimmy Gomez, a California Democrat, and signed by 98 members urged the president to extend both TPS and the student program for 18 months because “given the already unmet humanitarian need in the country and the effects of the armed conflict with Russia, the Ukrainian government is in no state to receive TPS and SSR eligible Ukrainians.”

SSR would allow for the temporary suspension of certain requirements put in place by DHS for a foreign student studying in the U.S. “from parts of the world that are experiencing emergent circumstances.” Some of those requirements include “duration of status, full course of study and off-campus employment eligibility.”

Russia began its invasion into Ukraine on Feb. 24. Ukraine’s health ministry reported that at least 250 civilians have been killed in the attack.

Members of Congress praised the Biden administration for the TPS designation for Ukrainians.

Sen. Bob Menendez, a New Jersey Democrat and chair of the Senate Foreign Relations Committee, said in a statement that the TPS designation was the right thing to do “after a week of Vladimir Putin’s illegal and ruthless war against the people of Ukraine.”

“Temporary Protected Status was created by Congress for exactly this purpose — to protect people whose home countries have experienced armed conflict, an environmental disaster, or extraordinary conditions that prevent people from safely returning home,” he said.

The White House is also asking Congress to approve $10 billion in aid for Ukraine to help bolster soldiers in neighboring countries around Ukraine and to send military equipment to the country. The Biden administration has announced it would place sanctions on Russia’s President Vladimir Putin and the country as well.

Lisa Parisio, the Director of Advocacy at the Catholic Legal Immigration Network, said in a statement that the Biden administration should also use TPS for “Ethiopia, Cameroon, Mauritania and other countries whose nationals face grave danger if they are forced to return.”

“The backlog of TPS designations for Black-majority countries here in the U.S. mirrors the anti-Blackness we’re seeing as African students and others in Ukraine are denied access to escape the conflict,” she said.

CLINIC, along with nearly 200 organizations, petitioned for the Biden administration to allow Ukrainians in the U.S. to use TPS.

In a letter to the White House, a bipartisan group of 42 senators advocated for the TPS designation, arguing that “it is obviously too dangerous for Ukrainian nationals to return to Ukraine due to the ongoing armed conflict.”

“Forcing Ukrainian nationals to return to Ukraine in the midst of a war would be inconsistent with America’s values and our national security interests,” they wrote. “As a nation, we must do our part to protect the safety of Ukrainians in the United States by designating Ukraine for TPS.”