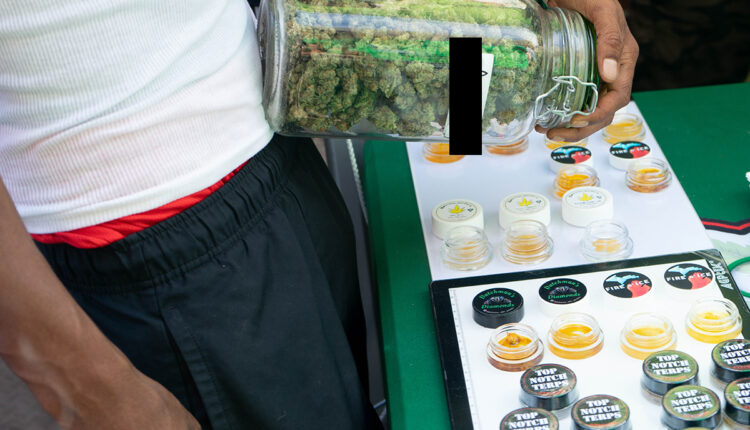 A new lawsuit filed this month against the City of Detroit over its recreational marijuana ordinance could undermine City Council’s effort to carve out a piece of Detroit’s cannabis business for legacy residents.

The suit takes aim at a provision in the ordinance that won’t allow existing medical marijuana dispensaries to sell to recreational users until 2027, cutting profit and growth opportunities for Detroit-based suppliers.

The recreational marijuana ordinance, passed April 5, was considered a win for Detroiters that want Black and Brown participation in the emerging marijuana market.

“I feel like it’s the City Council’s job to enact what people in the city have asked for and we’ve asked for the ownership in this industry to be reflective of the population,” said Najanava Harvey-Quinn, a legacy Detroiter, and part owner of a medical marijuana dispensary that has been closed since 2020.

Harvey-Quinn said she is in favor of the ordinance as written because “it’s what Detroiters have been asking for” but also believes there should be an easier way for companies that have been working with the city to get their licenses.

She also said the ongoing delays for a recreational license ordinance are hurting the industry and hopes the lawsuit doesn’t drag on.

“If a dispensary is open and it currently has a good relationship with the community, I don’t see why they would have any problems applying for recreational licenses,” she said. “The folks who are filing this lawsuit have money to stay open and file lawsuits, a lot of the Black folks don’t have that luxury.”

City Council President Pro Tem James Tate has been instrumental in writing the city’s long awaited recreational marijuana ordinance. Tate, who represents District 1, said he is “disappointed but not surprised” by the lawsuit against the city.  (City of Detroit photo)

“Delays hurt those who are trying to get into the industry, especially legacy Detroiters, those who have been plugging along trying to obtain an entryway,” Tate said.

House of Dank, the company that filed the suit May 11, has four medical dispensaries in Detroit and four recreational dispensaries across the state. The lawsuit argues that the City’s attempt to give “preferred newcomers” an “artificial head start” in the cannabis business is a violation of state law.

Mike DiLaura, general counsel at House of Dank, said he understands the importance of the social equity component of the city’s ordinance. He believes legacy Detroiters – in a majority Black city – should have representation in the business but questions the City’s efforts to achieve this. He said the ordinance punishes companies that have been good actors.

“We would like to see the City democratize the process and offer up more parcels that are zoned properly and make more available licenses,” DiLaura said. “It’s a race to produce the best customer experience and retail store that you can to compete in the marketplace.”

Kevin Blair, the plaintiffs attorney, said “the only practical way” for Detroit to achieve social equity is to let medical dispensaries get recreational licenses right away and use money from the excise tax to help longtime residents.

“Based off last year’s excise tax numbers, the city lost out on about $3.5 million this year. That’s money that could be used to fund the equity program,” Blair told BridgeDetroit in an email.

Blair said he estimates the excise tax to be about $56,400 per retailer and there are about 70 retailers in the city.

In 2021, Tate estimated that the expansion from medical marijuana to adult-use in Detroit could generate close to $8 million within four years.

If the city doesn’t make changes to the ordinance on its own, DiLaura said a federal judge will declare the ordinance unconstitutional for preventing existing medical dispensaries from entering the recreational market.

This is not the first time Detroit faced challenges to its recreational marijuana plans. Last year, a federal judge said the city’s “legacy Detroiter” provision was “likely unconstitutional” for giving too much preference to some Detroit residents.

Tate said he is “disappointed, but not surprised” by the legal challenges the city is facing over its ordinance.

“We believe that it’s a very strong ordinance that helps as many as possible and works to not harm folks,” Tate said. “But it is unfortunate that here we are again in terms of the conversation about litigation.”

Evan Daugherty, retail provisioning manager of Luxury Loud in southwest Detroit, said he’s a fan of the social equity component of the ordinance but Daugherty understands why other businesses have concerns.

“When you’re a business and people want you to do something that doesn’t directly help you, it’s not always going to feel good,” Daugherty said, “but that stuff is sometimes what’s best for the city.”

Daugherty wishes the city took this approach and applied community benefits agreements to other industries in the city.

“If you go to most gas stations or liquor stores in the city, it’s not (Black Detroiters) who own them, those businesses don’t have to do anything for the Black neighborhoods they sit in,” Daugherty said.

Tate said that the City Council is open to more ideas to improve the ordinance and to help the city achieve its social equity goals.

“We’re taking it as folks submit ideas, suggestions, and recommendations to us,” he said. “We’re looking at them, reviewing them and seeing what makes sense.”

authored by
First published at https%3A%2F%2Fwww.bridgedetroit.com%2Flawsuit-could-revoke-measures-to-create-equity-in-recreational-pot-market%2F