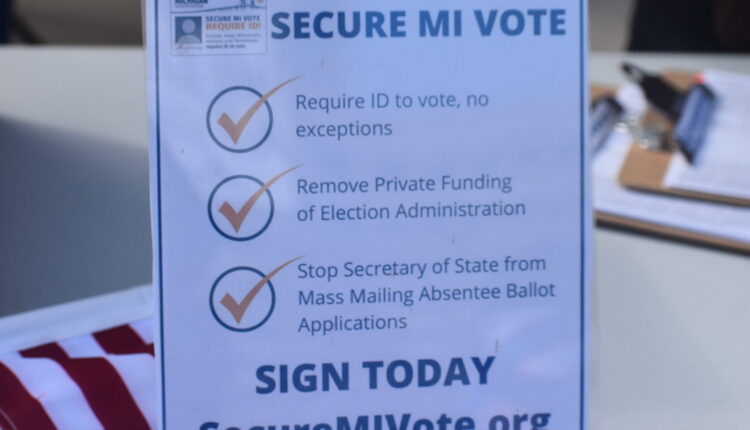 After organizers announced last month they’d gathered enough signatures to put a proposal clamping down on voting on the November ballot, the Secure MI Vote coalition submitted petitions on Friday — well past the deadline.

If the Bureau of Elections approves the signatures for the proposal, which is backed by Michigan Republicans, it will go to the GOP-led Legislature for a vote. If approved, the measure will not go before voters and Democratic Gov. Gretchen Whitmer — who opposes the initiative — has no power to veto it.

“Now we’re calling on Secretary of State Jocelyn Benson, not to delay, but to review these swiftly and to certify these petitions so the Legislature can get back and put these into law,” said state Rep. Matt Hall (R-Comstock Park) during a Friday press conference with Secure MI Vote.

The proposal would require ID for in-person and absentee ballot applications, eliminating an affidavit option for in-person voting without ID. Under the initiative, voters facing hardship would be provided a free ID using a $3 million state fund.

It would also prohibit unsolicited absentee ballot applications, require partial Social Security numbers for voter registration and ban outside funding for elections. It would also require voters who did not present their ID in person to present it within six days after the election for their vote to be counted.

After former President Donald Trump lost the 2020 election and baselessly claimed there was voter fraud, Hall convened a House Oversight Committee hearing that Trump lawyer Rudy Giuliani ran and netted national coverage. In 2021, Republicans in Michigan and across the country introduced a slew of voter restriction bills. Whitmer vetoed a number of them and so Republicans unveiled the Secure MI Vote initiative to achieve their policy goals.

The petition gathered more than 435,000 signatures by early June, more than the required number of signatures to get on the ballot, but Secure MI Vote decided to delay filing to gather more signatures.

“Even worse than the language and rolling back of voting rights is the fact that Republicans intend to pass the bill without letting voters have a say, using a loophole in our initiative law that bypasses voters and the Governor’s veto pen,” said Progress Michigan Executive Director Lonnie Scott.

Nancy Wang, executive director of Voters Not Politicians, called the proposal a “package of voter suppression bills disguised as a citizen initiative.”’ Voters Not Politicians was part of the coalition behind the Promote the Vote coalition, which submitted 669,972 signatures earlier this month to get on the ballot as a constitutional amendment expanding voting rights. It builds on a 2018 measure from the coalition that passed with almost two-thirds support and instituted same-day voting registration, straight-ticket voting, no-reason absentee voting and more.

If the Promote the Vote proposal gets support from the majority of voters in November, then the Secure MI Vote initiative will be moot, even if the Legislature puts it into law.

“Just two weeks ago we turned in the second-highest number of signatures in Michigan history supporting what voters really need: a constitutional amendment that makes elections more modern and secure that voters can decide on in November,” Wang said in a statement.