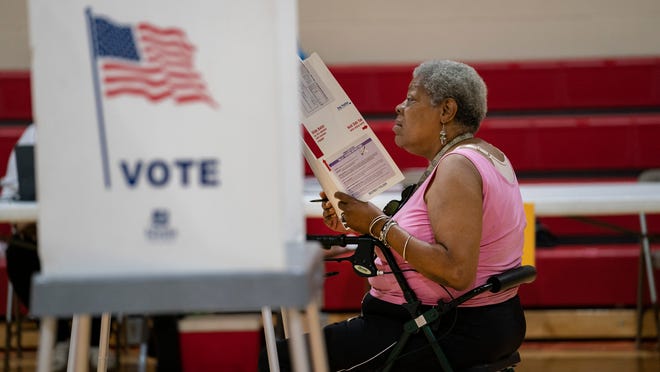 US Rep. Rashida Tlaib, facing yet another in a series of challenges from her own party, had the early lead Tuesday night in the newly drawn 12th Congressional District over Detroit City Clerk Janice Winfrey.

Tlaib, D-Detroit, who has become internationally known as a member of the progressive group of Democratic congresswoman known colloquially as “the squad,” led Winfrey 56%-26% with just over 11% of the expected Democratic vote about 9:45 pm Come back to freep.com for updates.

Other candidates in the race for the Democratic nomination trailed the two frontrunners, with Lathrup Village Mayor Kelly Garrett getting 13% in the early going and former state Rep. Shanelle Jackson of Detroit getting 5%.

More:6 races — and types of races — worth watching in Tuesday’s Michigan primary

More:Ocasio-Cortez, other squad members holding rally in Detroit on Sunday

Tlaib first won election to Congress in 2018, becoming the first Palestinian-American woman in Congress and, with Rep. Ilhan Omar, D-Minn., one of the first two Muslim women in the US House. In doing so, she split a field of mostly Black candidates — including former Detroit City Council President Brenda Jones — to take the nomination for the full two-year term that followed in the majority Black district.

In 2020, she beat another challenge by Jones, who later retired from council. Over her two terms, Tlaib has proven herself to be a prodigious fundraiser, tireless campaigner and committed progressive. Still, some of her stances — she voted against a big infrastructure bill last year championed by her own party and has remained a vocal critic of Israel’s treatment of Palestinians living in the occupied territories — have led to complaints in her own party, as did her delivering a response to President Joe Biden’s State of the Union address this year calling on him and other Democrats to do more.

That said, Tlaib went into this year’s campaign and the challenge from Winfrey with a huge advantage in name recognition and money. While Winfrey attracted some support from pro-Israel groups, the funding some others saw from organizations like the American-Israel Public Affairs Committee (AIPAC), which is highly critical of Tlaib, never appeared for her at the same level.

Even though Tlaib lived in the newly created 13th Congressional District, she decided to move into the new 12th as it included much of the base she already had on Detroit’s west side and in western Wayne County communities including Westland, Redford, Dearborn Heights and Inkster. And while the 12th added two big communities in Southfield and Livonia that were not part of her current district, it also added Dearborn — with one of the largest Arab-American populations in the country and where she is well known.

Susan Hicks, a 57-year-old environmental engineer in Dearborn, enthusiastically voted for Tlaib, though she said she will also miss voting for US Rep. Debbie Dingell, who moved to Ann Arbor and into another newly created district.

“She (Tlaib) seems like she’s really trying hard for us,” Hicks said. “I love the fact that she’s really (angered) the idiot that used to serve as president (former President Donald Trump). But I think she wants to try hard for people in Dearborn.”

Christel Ciolino, 28, is a new Dearborn resident who also voted for Tlaib.

“I’m progressive and I really do feel like she’s the most progressive of all the candidates,” Ciolino said. “And I feel like, with the world we have, we need people who are boldly, really pushing progressive policies.”

In the Republican primary in the predominantly Democratic district, only about 3% of the expected vote had been counted as of deadline for this edition. Steven Elliott, a tattoo artist and laser specialist of Rochester Hills, had 55.5%; James Hooper of Livonia, who worked in the building trades and in overseas religious missions, had 32.5%; and businessman Hassan Nehme of Dearborn Heights had 12%.

Contact Todd Spangler [email protected]press.com. Follow him on [email protected] Read more on Michigan politics and sign up for our elections newsletter. Staff writer Emma Stein contributed to this story.

ELECTION 2022: An Inside Look at the 37th District State Senate Race