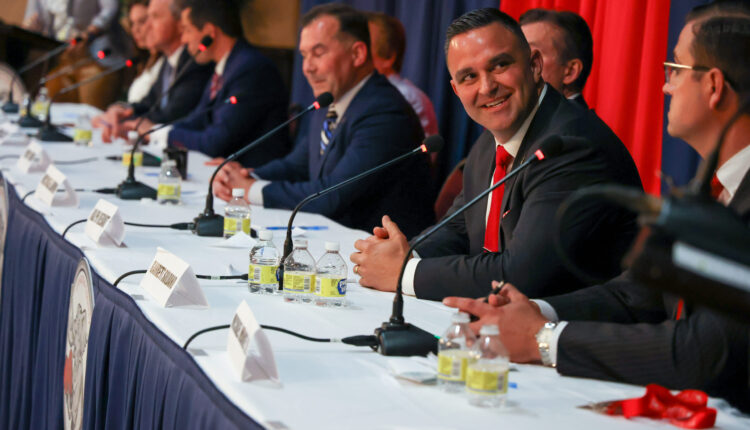 Squaring off at their first debate of the 2022 election cycle Thursday, six Republican candidates for governor said that Gov. Gretchen Whitmer should be criminally investigated for her handling of nursing homes during the COVID-19 pandemic.

Both the Department of Justice and Attorney General Dana Nessel have declined to investigate the governor, citing a lack of evidence.

Dixon compared an investigation of Whitmer to the charges against former Gov. Rick Snyder in cases related to the Flint water crisis, saying “she kicked the door open on investigating a former governor.”

Brown said that it should be investigated if there is evidence to warrant an investigation, but said it was not the role of a governor to call for one.

“As governor, you cannot stand up there and say A, B and C should be criminally prosecuted, this individual should be criminally prosecuted. It takes leadership to sit in that governor’s chair. That is not the role of a governor to say you need to be prosecuted for this,” Brown said. “If there’s ample evidence that comes up, and it looks like there is, there should be an investigation into that. But we do not need a governor that will target citizens of this state, and I will never do that to any citizen in the state.”

Markey said that candidates should be cautious with their answers so that they don’t give the appearance of a predetermined conclusion.

“I think anyone running for statewide office should be very careful how they answer this, because we don’t want to taint any evidence,” Markey said. “We have to remember this country was founded on basic principles, one of which was innocent until proven guilty. Another was a fair trial, a third was a jury of your peers. We have people running for statewide office who are acting like they’re the judge, jury and executioner.”

Two other candidates, former Detroit Police Chief James Craig and businesswoman Donna Brandenburg, did not attend the debate. Craig was scheduled to appear, but pulled out the day of the event.

All of the candidates in attendance said they would sign new laws outlawing abortions in Michigan if both Roe v. Wade and the state’s exiting 1931 abortion ban were overturned, although they differed on which limited exceptions they would support.

Rinke, Brown and Markey said they would support exceptions for rape, incest and if the life of the mother is at risk.

Dixon, Johnson, Kelley and Soldano would support exceptions only when the life of the mother is at risk.

Rebandt said he would not allow any exceptions.

Asked whether the COVID-19 vaccine was helpful in fighting the pandemic, Rinke, Kelley and Rebandt effusively said that it was not.

“How do we say no and talk for 90 seconds? It’s funny, because the vaccine represented political science versus medical science, and it’s a damn shame that people were used as guinea pigs for political gain in this country and in this state,” Rinke, who has had COVID-19 twice, said. “No vaccines, no mandates.”

Johnson, Soldano, Markey and Dixon all acknowledged that it was helpful for high-risk individuals, but railed against mandates and other pandemic restrictions.

“We will make sure that no future governor can ever weaponize the health department again,” Soldano said. “We’re going to make mask mandates illegal to make sure that you never have to go through that again.”

Brown said that he is a police captain, not a doctor, and as such was not qualified to answer.

Data shows that vaccines and boosters have been effective in reducing hospitalizations and deaths.

Asked during a lightning round if they “believe Donald Trump legitimately won the 2020 election,” Dixon, Kelley, Johnson, Rebandt and Soldano all said that he did.

Rinke and Johnson declined to answer with a simple yes or no, eliciting boos from the audience.

Brown and Markey directly said he did not win the election.

“We’ve got a bunch of people on stage here flopping around like fish on a dock,” Brown added.

President Joe Biden won Michigan by more than 154,000 votes. Claims of election fraud have been disproven by multiple courts, audits and a Republican legislative committee.

Some candidates criticized the question being limited to yes or no answers while speaking to reporters in the spin room after the debate.

“Tonight’s Republican debate in Livingston County – that James Craig refused to attend at the 11th hour – was a spectacular display of just how much damage every candidate’s wrong-for-Michigan agenda would wreak on working families. As expected, the entire slate of extremists jockeyed for who could spew the most outlandish conspiracy theory, implement the most radical abortion ban, and make the most crude cuts to the critical services that keep Michigan first,” she said.

Some questions appeared to be about proposals that haven’t been widely discussed in Michigan’s political discourse.

Asked whether Michigan should defund its public universities, Rebandt supported cutting off funds completely, while Soldano, Kelley, Johnson and Rinke all said funds should likely be reduced but not eliminated.

Two candidates, Rinke and Kelley, said they would want to abolish the Michigan Department of Education. The other candidates suggested reorganizing the department instead.

Several candidates noted the framing of the questions was misleading, as the governor would not have the power to unilaterally defund public universities or abolish the Michigan Department of Education. Both proposals would require amendments to the state Constitution.

Asked during a lightning round if they “believe Donald Trump legitimately won the 2020 election,” Dixon, Kelley, Johnson, Rebandt and Soldano all said that he did. Rinke and Johnson declined to answer with a simple yes or no, eliciting boos from the audience. Brown and Markey directly said he did not win the election.

“Constitutionally, those institutions do need to be funded. The dollar amount is not there,” Kelley noted on the question about public universities. “There’s a lot of different things that need to be looked at in regards to where that money is being spent, and I do believe that it needs to be reduced.”

Rebandt acknowledged that “constitutionally, we do need a state Department of Education,” but argued that “we need to dismantle it and rebuild it with parental involvement.”

“The governor does not have the authority under the Constitution to abolish the Department of Ed, and I am not Gov. Whitmer, so I’m not going to do things that I’m not allowed to do,” Dixon said.

The debate was mostly free of attacks on other candidates, though they did take the occasional swipe at Craig.

“Can I answer for James Craig since he’s not here? I guess he’s still running from the sidelines, not leading from the front,” Soldano joked at one point.

Craig faces the risk of not making the Aug. 2 primary ballot after thousands of signatures his campaign submitted were alleged to be forged. His campaign has acknowledged that they may have been defrauded by petition circulators they contracted. Both Dixon and Johnson also have had their nominating petitions challenged.

“When I got into this race, I was competitive. I said, let’s get the signatures faster than anybody else. We put that out as a goal for our team, and we did it,” Markey said during the debate. “Unlike some people, we did it the right way.”

Should You Worry About Data From Your Period-Tracking App Being Used Against You?

New name, new dates, and other highlights from Detroit’s school board meeting