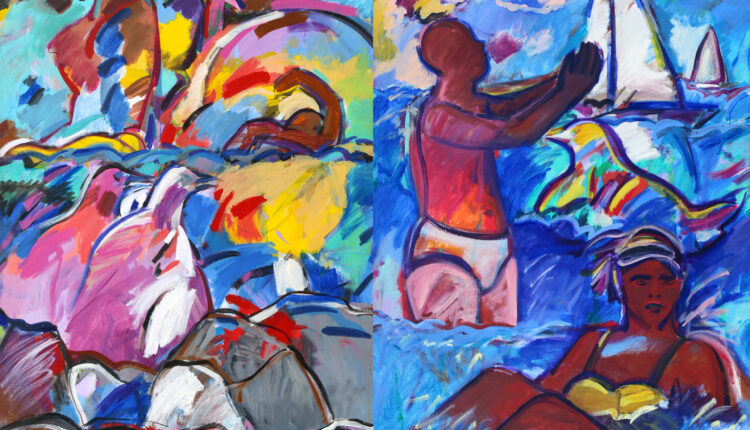 THE DETROIT INSTITUTE OF ARTS (DIA) is showcasing large, vibrant paintings by Shirley Woodson featuring Black figures immersed in the Nile River. The images reference the mythical qualities of the storied African river and notions that its water provides bathers with nurturing and restorative experiences. Color, composition, and a cacophony of brush strokes define the formal aspects of Woodson’s work. At the same time, the paintings and the fact of the exhibition speak directly to the artist’s personal narrative.

“Shirley Woodson: Shield of the Nile Reflections” is Woodson’s first solo exhibition at her hometown museum. The show presents 11 dream-like paintings made between 1987 and 2014. The series features figures and objects floating in abstracted environments active with energy and movement. Multiple ideas and concepts share space in her pictures, which she describes as “epic painted stories” reflecting African diaspora, African American history, and her family traditions.

“When you are thinking about what happened this morning, you’re thinking about you’ve got to pick the kids up, or you remember this, all these things are going on compositionally. They keep the motion going,” Woodson told CBS News, explaining how the currents of ordinary life and the reality of multitasking inform her work.

Woodson, 85, pairs her figures with shields, horses, flowers, trees, grapes, fish, and shells, introducing a visual vocabulary rife with meaning in everyday life. In addition to the spiritual nature of the Nile, several other themes are embedded in the images. A succession of boats perhaps symbolizes the Middle Passage. The significance of family heritage and generational legacies emerges in her depiction of mirrors. Birds may reference the Great Migration of African Americans from the South to the North during the first half of the 20th century, reflecting the artist’s own experience.

BORN IN PULASKI, TENN., Woodson was only three months old when her family moved to Detroit. An artist, educator, art historian, and collector, Woodson first visited DIA for art extension classes. She was in junior high and continued attending every Saturday throughout high school.

“It was sort of my most favorite place to be. Whenever I left home, I wanted to go to the museum,” Woodson told Nichole Christian, who wrote about the artist’s life for “A Palette for the People: The Vibrant World of Shirley Woodson,” a monograph published by the Kresge Foundation last year.

Woodson went on to attend Wayne State University in Detroit where she received a BFA (1958) and later earned an MFA (1965). In the interim period between degrees, she pursued graduate studies in painting and art history at the School of the Art Institute of Chicago, learning alongside sculptor Richard Hunt. She also went to Europe, where she studied in Paris, Rome, and Stockholm.

After completing her studies, Woodson became a career educator, teaching students from primary school to college and also shaping curriculum. From 1966 to 1992, she was an art education specialist in Michigan’s Highland Park School District in the Greater Detroit area. At Wayne State University, her alma mater, she served as a professor of art education (1996-2000). Her final assignment was with the Detroit Public Schools, where she was supervisor of fine arts beginning 1992, until her retirement in 2008.

Shirley Woodson on her early experience with the Detroit Institute of Arts: “It was sort of my most favorite place to be. Whenever I left home, I wanted to go to the museum.”

For more than four decades, Woodson imbued Detroit students and the larger community with their knowledge of art and their passion for the field of African American art, advocating for public programming and support for generations of artists.

Internationally recognized fiber artist Sonya Clark is among the many who praise Woodson for her generosity, mentorship, and connections. Clark met Woodson in the mid-1990s while attending Cranbrook Academy of Art in Bloomfield Hills, Mich., about 30 minutes from Detroit.

“I simply cannot imagine how I would have navigated my graduate school years without all the wonderful people she introduced me to,” Clark told The Detroit News. “So many of my lifelong friendships with artists and art folks started with my connection to Shirley Woodson.”

IN RETIREMENT, HER DEDICATION CONTINUES. In 1974, Woodson co-founded the Michigan chapter of the National Conference of Artists (NCA), the oldest arts organization in continuous operation in the United States. NCA is devoted to developing and promoting opportunities for Black visual artists. Established in 1959, the advocacy and education organization provides and forum for emerging and established artists. Woodson serves on NCA’s national executive board and remains president of the Michigan state chapter.

For more than four decades, Woodson imbued Detroit students and the larger community with their knowledge of art and their passion for the field of African American art, advocating for public programming and support for generations of artists.

Alongside her career as an educator and her advocacy work, Woodson maintained her artistic practice. In the early 1960s, she became a member of Arts Extended, an artist incubator led by Cledie Taylor that provided Black artists opportunities for critique and a space to exhibit and sell their work.

Woodson won a MacDowell Fellowship in Peterborough, NH (1966-67), garnered many other awards over the years, and exhibited in local solo and group shows. Eventually, she also booked national and international exhibitions.

Early on, she met her husband through her art. A friend of her brother Curtis, Edsel Reid was a New York-based art collector who saw her work and wanted to buy it. After he met Woodson in 1965, he immediately had an interest in her, too. They married in 1967 and had two sons, Khari and Senghor Reid.

Since 2003, she’s shared a two-room studio in her home with Senghor, who is also an artist. Last year, the Kresge Foundation honored Woodson as the 2021 Kresge Eminent Artist, a distinction that included $50,000 and a monograph dedicated to her work.

Throughout her career, Woodson remained connected to the Detroit Institute of Arts, where her art education began. In 1960, her work was first featured at the museum in a group exhibition of Michigan artists. From her perch as an educator, she played a role in the museum initiating an annual student exhibition program. In 1998, she won DIA’s Alain Locke Award (1998), presented by the museum’s auxiliary Friends of African and African American Art group. In 2001, DIA acquired a drawing by Woodson (“Crown on Fire,” 1995). But it would be another two decades before she had her first solo exhibition at the museum.

“September Wave” is among the paintings on view in “Shirley Woodson: Shield of the Nile Reflections.” A testament to the love and partnership Woodson shared with her husband, who died in 2000, the painting features two figures in the top left-hand corner. Dressed for the beach, Shirley and Edsel are laser-focused on one another despite the swirl of activity that dominates the picture, including a large sea shell and swells of water.

For 60 years, Woodson has been a reliable force for change, education, and opportunity in the Detroit’s art community. Along the way, she met the challenges and discrimination faced by Black artists and women artists with determination, entrepreneurship, and unbound creativity.

“It’s about survival,” Woodson said to CBS News. “About keeping those goals you have in play and proceeding and moving forward.” CT

In February, Shirley Woodson was featured on CBS Sunday Morning discussing her solo exhibition at the Detroit Institute of Arts. | Video by CBS News

BOOKSHELF
The Kresge Foundation published “A Palette for the People: The Vibrant World of Shirley Woodson” on the occasion of Shirley Woodson being named 2021 Kresge Eminent Artist. The fully-illustrated publication is thorough and informative. The 80-page monograph explores the artist’s life and work in detail, shedding light on everything from her early exposure to art and encouragement from her parents to her work with Dudley Randall at Broadside Press, connection to Langston Hughes, advocacy for education about Black artists , renowned collector Walter O. Evans to start buying art, owning and curating a gallery, and analysis of Woodson’s work. Contributors to the volume include Nichole Christian, Allie McGhee, Camille Ann Brewer, Dell Pryor, and Senghor Reid.

SUPPORT CULTURE TYPE
Do you enjoy and value Culture Type? Please consider supporting its ongoing production by making a donation. Culture Type is an independent art history project that requires countless hours and expense to research, report, write, and produce. To help sustain it, make a one-time donation or sign up for a recurring monthly contribution. It only takes a minute. Many thanks for your support.