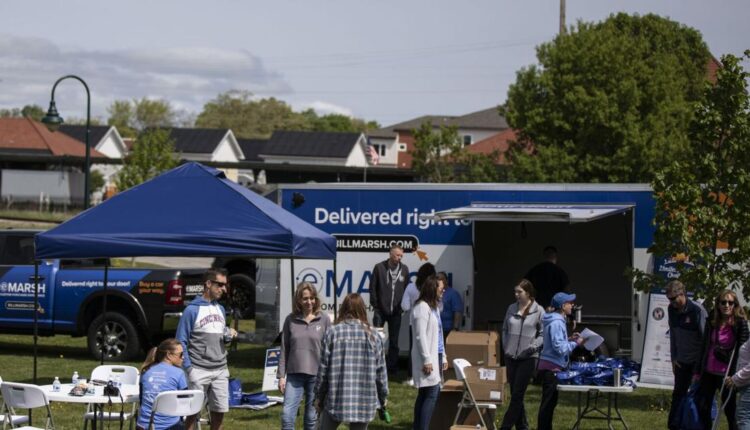 TRAVERSE CITY — At a small Wexford County elementary school, some 20 children have lost parents to traumatic circumstances in just a few years. More than 50 percent are due to drug overdoses, suicide and other mental health issues.

A counselor at the school, who asked that her and the school’s identity remain anonymous to protect the children’s collective privacy, says those losses have taken a toll.

“I have increases in CPS (Child Protective Services) referrals I make on a daily basis for abuse and neglect,” she says. “We’ve seen an increase in suicide assessments — for elementary school students.

“It’s pretty scary what we’re dealing with on a daily basis.”

What her school is seeing fits in with a larger trend that that Traverse City’s Michael’s Place is reporting. Michael’s Place provides support and advocacy for children, teens and adults grieving death, serving five counties within the Traverse Bay Area Intermediate School District.

Citing numbers from a Child Bereavement Estimation Model produced by the Denver-based Judi’s House, which also serves grieving children and families, Michael’s Place Executive Director Mindy Buell says that the latest studies for 2022 show that one in 11 Michigan children will experience the death of a parent or sibling by the age of 18. That puts the state in 17th place nationwide.

“That’s a pretty large increase in bereaved children,” says Breanna Broering, Michael’s Place grief services coordinator and facilitator of grief support groups in the region’s schools. “Prior to the pandemic, it was an estimated one in 20 nationally. In 2021 in Michigan, that number was one in 12, and with the recent early release of stats from Judi’s House, Michigan is now at one in 11 this year.”

Neither Buell nor Broering could pinpoint the cause for the uptick. But it has brought a jump in demand for Michael’s Place services, which include grief support opportunities offered at its Traverse City facility as well as developing and leading support groups onsite in the region’s schools.

“So the need has greatly increased over the course of this particular year.”

In the schools, children meet in small groups according to their ages. Some are specifically oriented to kids who have experienced traumatic, or unexpected/sudden loss.

“It’s important to have the offer of support groups in schools for students that are bereaved,” says Broering. “Because when a child experiences a death, that’s on their mind and it doesn’t go away when they enter the school building.

“When we can meet the students in the school where they’re at and offer support, our goals are to reduce the isolation they may be feeling … we try to give them a safe space for sharing about their loss and that person. We also work to equip them with coping skills.”

Buell notes that offering such services in schools helps overcome obstacles that would keep students from such services: lack of transportation, limited gas money, maybe they live too far out of town to access other local services.

It’s able to deliver the services with a paid staff of six and a roster of about 110 volunteers who participate with varying levels of frequency. Because of heightened demand, the organization expects to hire more staff.

Reliant on donations for the bulk of its funding, Michael’s Place has just launched a “Choose Your Adventure” challenge that will run through June 21 and that it hopes will generate $35,000 to help cover expenses.

They say it’s money well invested, especially when demand is so great.

As the Wexford County counselor notes, many of the children being served have lost their primary caregiver. Some actually found their parent dead.

“These students are at risk anyway because they have had adverse childhood experiences,” she says. “They have lived in trauma. They don’t come from stable homes as it is and now they’re missing one of their primary caregivers as well.

“We thought bringing Michael’s Place in as an additional support for these children as they’re grieving would be really beneficial and it has been.”

She says children who have been closed-off and uncommunicative begin to open up.

“You notice the kids feel they can talk about their loved one, share stories — even some of the kids who found their parents shared that experience with the group,” she says. “They’re able to do it because their friends have gone through something similar.

“When you lose someone and you’re grieving, it can feel very lonely. These groups have helped take that away.”

Detroit Tigers may be missing Matt Manning for longer than expected

Detroit Pistons excited to be sooner, more athletic after…